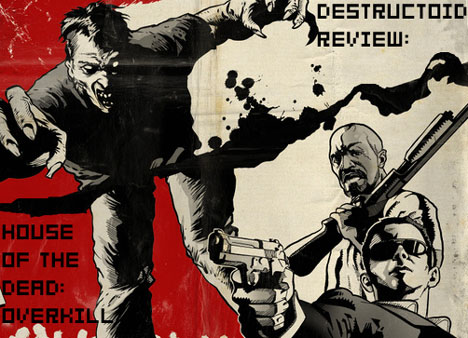 There was a time when on-rails shooters were a fairly powerful force in the world of console gaming, but after GoldenEye launched on the N64 twelve years ago, most interested parties figured that the genre had been permanently replaced by the first person shooters.

As it turns out, most people were wrong.

On-rails shooters are making a comeback, largely thanks to the Wii remote and its built-in pointer controls. Games like Resident Evil: Umbrella Chronicles, Ghost Squad, and House of the Dead 2 & 3 have all found financial success on the Wii in a way that probably couldn’t have happened on the 360 or the PS3.

When something proves to be a moneymaker, you can be sure you’re going to see more of it, and so the cavalcade of on-rails Wii shooters still hasn’t stopped. Personally, I think it’s great to see the genre strutting its stuff again, but I am also worried that the studios developing these games may start churning out crap, counting on the continuing momentum of the Wii to sell their games instead of relying on the quality of their product to drum up sales.

So how did House of the Dead: Overkill turn out? Is it a game that’s just piggybacking on this recent resurgence of the on-rails genre, is it a game that’s actually worth playing, or both? Hit the jump to find out. 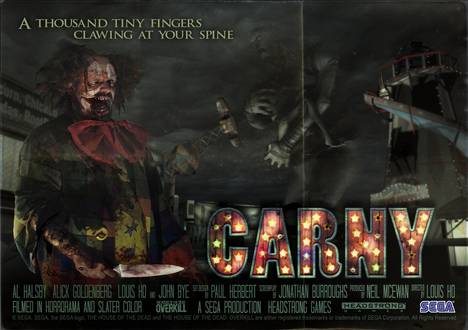 From there, the game spends nearly all of its time either paying tribute to low-budget horror films of the 1970s and 1980s, making fun of the swear-laden, tough guy dialogue found in games like the GTA series, and/or pushing the player’s tolerance for absurdity and repulsiveness to its absolute limit. The game’s cut-scenes are where it really shines. They are almost always laugh-out-loud funny, completely revolting, or both. Probably most notable are the last two such scenes, which take the ending of the horror/comedy epic Dead Alive, mix it with a healthy does of consensual incest, and top it off with a fourth-wall-breaking feminist critique of the game itself from the constantly f-bombing, Blaxploitation-inspired co-protagonist of the game, Issac Washington. 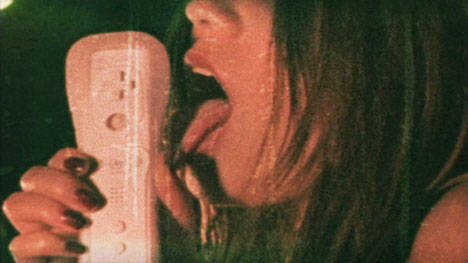 Yes, I just told you that. I just told you that House of the Dead: Overkill actually takes the time for some self-analysis, from a feminist perspective no less, by having the game’s main tough guy completely exit character and wax poetic about how chauvinistic House of the Dead: Overkill really is. It’s stuff like that that helps propel this game past even No More Heroes in the “surreal comedy/action game that constantly mocks itself” genre (if there is such a genre).

If you haven’t guessed yet, I didn’t expect the game’s cut-scenes to be this genuinely fun and original. I did, however, expect the game itself to be pretty great, given how much I enjoyed all the other light gun games on the Wii. Sadly, that expectation is what got me into trouble.

As an interactive horror/comedy movie, House of the Dead:Overkill is fantastic, but as a videogame, it leaves a lot to be desired. In terms of gameplay, it’s pretty bare-bones, even compared to other light-gun shooters.

One of the few new additions to the way the game plays is the “Slow Mo-Fo Mode.” If you shoot a little green item while playing, the action goes slows down Viewtiful Joe style, as if the film itself is being projected at a lesser speed. All the music and dialogue slows down as well, a nice detail that adds to the feeling that the game really is an interactive movie. Other than that, though, the item isn’t all that notable. It makes it a little easier to shoot the zombies, and that’s it.

Another cool addition to the game is the combo counter. If you’re playing the game with someone else, forget about it; combos are going to be next to impossible to pull off. When playing alone, though, going for combos can be a lot of fun. Every five shots get you ranked up a notch, until you reach the final rank of “Goregasm” (which causes an American flag to wave on screen, apparently implying that we Americans equate sexual climax and violence). 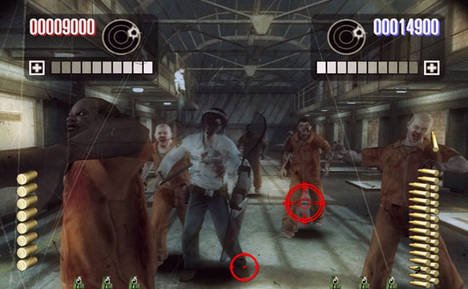 The bad news is that there are very few destructible objects in the game. In your average light gun shooter, you’re rewarded for blasting not only the guys/girls/things coming at you, but also everything else in in sight. Not so in HotD:Overkill. With few exceptions, shooting stuff in the environment does nothing but cause a few bullet holes to appear, and sometimes you don’t even get that. It sounds like a little thing, but in a game all about shooting stuff, it’s kind of a big deal.

I also found the game’s bestiary to be lacking. The broad variety of zombies (or as Agent G insists on calling them, ‘mutants’) from the previous HotD games are mostly absent. In HotD:Overkill, enemies basically come in three types: regular (which come in various flavors such as clown, nurse, and fat-‘n’-black), grabbers (which run up and grab you, requiring you to shake the Wii Remote to get them off) and pukers (who attack just like grabbers, but if you kill them while they’re too close, they explode into a fountain of lethal vomit). There are also occasional attacks from vultures, zombies that throw beer bottles, etc. It’s not the worst selection of zombies I’ve ever seen, but it feels notably smaller than the types found in previous games in the series. 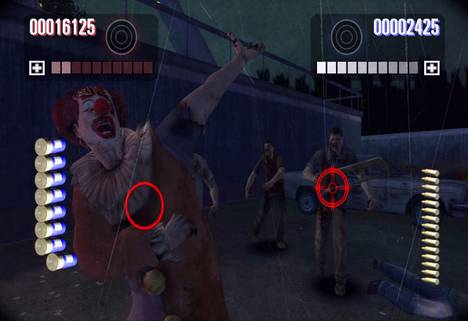 I also found the game’s boss battles to be somewhat lacking. The second and sixth bosses are great, the third and fourth are crap, and the rest are just average. Probably worst of all, the balance of the game’s weapons is awful. Once you get the assault shotgun, you never need to use another weapon again. Having powerful weapons in a game like this is fine, but you can’t give them infinitely replenishable ammo. That’s what HotD:Overkill does, which only serves to make an easy game even easier (but I’ll get to that later).

As for the graphics and sound, they are a real mixed bag. One second the game looks fantastic (like when blood splatters all over the wall after a zombie decap), then suddenly it looks like crap (like in most of the cut-scenes). The music is catchy and amusing at times, boring at others, but regardless, it rarely does anything notable. There is a song that plays during the game’s menu that’s sung by a man who lusts for the decomposing body of a mutant woman, but other than that, there isn’t much music here worth remembering. 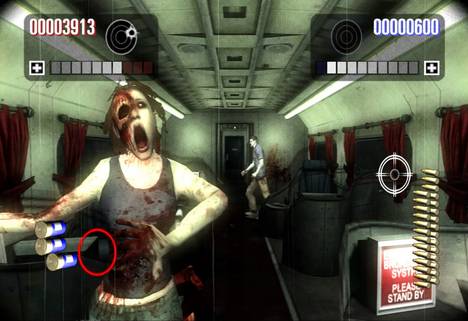 On the whole, HotD:O is so easy that you if you’re playing with an even mildly conscious friend, you may get through the main game on the first try without dying once. Even if you do die, the only consequence for continuing is a loss of points, which means nothing unless you were going for a high score, and if you’re into the game enough to be going for a high score, chances are, you won’t be dying too often. There are quite a few cool unlockables thrown in to increase replay value, such as production art, 3D character models, weapons, and videos (including a kick-ass MadWorld trailer), but all that aside, a three-hour game is still a three-hour game. Sega’s got a lot of balls charging $50 for this sucker, especially seeing as the game’s direct competition, Resident Evil: Umbrella Chronicles, is over four times longer.

After you beat a level, you can play it again with more zombies if you want to, and after you beat the whole game, you unlock the “Director’s Cut” mode. It’s basically the main game again but with an increased number of zombies, a few new paths added to each level, and only three continues per stage. It can be a little hard at times, but since it uses the same cut-scenes as the standard game, there isn’t much incentive to actually play through it. 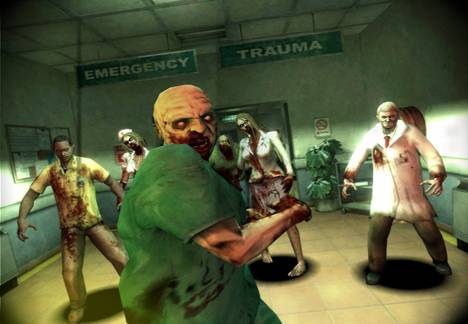 In the end, how much you enjoy HotD:Overkill will have a lot more to do with how much you like horror/comedy movies, and a lot less to do with how much you like videogames. If you thought that Black Sheep was the best movie of 2008, or if you can quote at least one line from Shaun of the Dead, Evil Dead 2, or Planet Terror, HotD:Overkill may very well end up being one of your favorite games of all time. Hardcore light gun game fans will also find a lot to enjoy, despite the fact that there are better games in the genre out there. HotD:Overkill may not be an epic, ground-breaking game of the century, or even the best on-rails shooter released this year (I’m looking at you, Dead Space: Extraction) but it’s got some of the most memorable cut-scenes in the history of gaming, as well as some of the most fast-paced zombie shooting action this side of Left 4 Dead. I give it a…