I believe it was famed golf legend Happy Gilmore that once said that “Golf requires goofy pants and a fat ass.” He’s right. Golf also requires skill, psychical ability, golf clubs and equipment, and outrageous fees to play. And you have to be outdoors! Oh, and let’s not forget that you’ll need a pair of those stupid looking shoes.

The best part about videogame golf is that you can forego the fees, sunlight, and silly clothing — though you just may get that fat ass from sitting on your couch for too long. The Hot Shots Golf series has always been among the best as far as golf videogames goes, and the only thing this series has been missing is online competitive play. This time around, developer Clap Hanz offers up a PlayStation 3 version with the online play we’ve been waiting for, and throws in an all new swing system to boot. Is Hot Shots Golf: Out of Bounds worthy of the “Gold Jacket?” Or will it be a case of “better luck next year!”?

Hit the jump to read our review of Hot Shots Golf: Out of Bounds.

Let’s get this out of the way first: yes, Hot Shots Golf: Out of Bounds has in install process. The first time you pop in the game disc, you’ll spend a little more than ten minutes waiting for the game to install to your console’s hard disk. The install takes about 4GB of space, and only has to be done once.

Some complain about this process, but it’s really for their benefit. After installing, the game loads very quickly, and the menu and customization screens appear instantly. There is a short pre-tournament  load time, but during game play, each hole has no load time at all. You’ll never have to worry about load times breaking up the action, and things progress so smoothly that you might take it for granted. Streaming data from hard disk also streamlines online game play. With support for up to 50 players online, disc load times could really bog things down.

Fans of the Hot Shots Golf series will feel right at home with Out of Bounds. This new version still features the wacky super-deformed characters and slightly over-the-top courses, but this time around they are presented in glorious high-definition. I teed up to visually pleasing vistas; the PS3 provides the graphical muscle to give these courses realistic sunlight and rain. As I unlocked new courses, I was continually impressed by their cartoon-ish realism. The characters still have really big heads and disproportionate bodies, though they now sport more realistic features and clothing. They really look great now, and they serve to show just how far the series has come since the PSOne original. Fans of the series will remember how incredibly ugly those first golfers were. 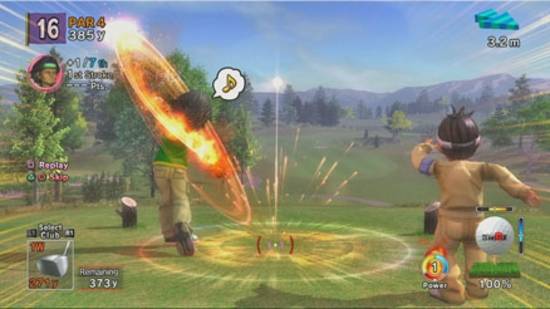 The most significant change is the new Advanced Shot swing system. In all of the previous HSG games, players would time button presses to a meter on the bottom of the screen. Advanced Shot still uses precise timed button presses, but it allows you to watch your character’s animation rather than a meter. One press starts the back swing. You’ll have to watch for the height of the character’s club to time the second button press, and visual cues are used to let you know where half and full power are in respect to club height. After this second press, a circle closes around the ball. The goal is to press the button for a third time when the circle is smallest. Your timing determines impact accuracy.

With this new system, it’s not difficult to hit the ball at 50 or 100 percent. But, finding 30 percent is a bit of a challenge at first. I did get used to it, and in the end I felt like I had much more interaction with the ball than I had with the old meter. Chubbs Peterson would say that “it’s all in the hips.” Of course, the classic control method is still available to those who prefer it. But I found that the majority of players, online and off, pick the new Advanced Shot over it. It’s just more fun.

Online multiplayer is probably the biggest draw for series fans. I was a bit nervous about how well this function would work, but I’m glad to report that Sony and Clap Hanz did a stellar job of implementing online play for Out of Bounds. I’ve played through numerous online tournaments without a hitch, and the majority of them included 30 or more players. Matches with up to 50 players are supported in tournaments, and up to eight are supported in single games. 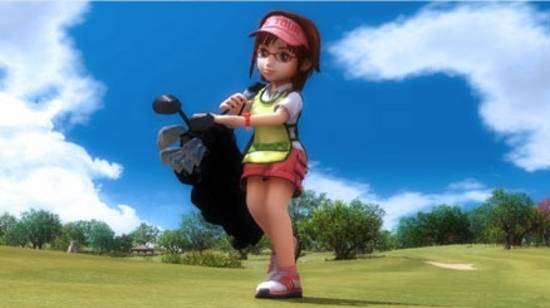 Players can create their own online avatar to be used in the various lobbies. There are several fun customization options, and more can be unlocked as the game progresses. These avatars are cute and squatty, and will only be used for social purposes. In these lobbies, players can walk about and converse with other players before and after matches; think of them as golf course clubhouses. A press of the R2 button brings up several pre-set lines and comments, and you can also type in your messages by hand (keyboard supported). Players also have full access to their PS3 friends lists and messaging in-game. Unfortunately, voice chat is not supported, though I honestly didn’t miss it much.

After socializing in lobbies, players are whisked away to the first hole of the tournament or match. Each player in the tournament plays the same hole at the same time, and after each shot you can chat about your play… or mock other players. When everyone is ready, they are all moved onto the next hole. It’s a pretty brilliant system: you don’t have to wait on other players, and it’s really fun to see how others compare to you in real time. I’m pleased to say that, so far, online play has been lag-free and flawless.

No worries if you’re not the online type. There’s tons of unlockable items (balls, clubs, etc.) and courses, and new characters and caddies keep things interesting. You’ll find that you’ll want to stick to one or two characters though, as each time you use them, your “loyalty” rating will go up. Higher ratings improve your abilities.

As always, this version of Hot Shots Golf is deeper than it looks. You’ll fight through wind and weather conditions and fight out of hazards. You’ll learn how important spin and impact are, and you’ll need every advantage you can acquire to beat the final tournaments.

Out of Bounds is Hot Shots Golf perfected. You’ll find that this one game can provide both a relaxing afternoon of 18 holes and a fevered 50-person tournament. Newcomers will find this game to be easily accessible, while series veterans will find plenty of new challenges. Everything that made the previous games so great is included, and the addition of online multiplayer and a new swing system take things to a new level. Hot Shots Golf: Out of Bounds is insanely fun and endlessly addictive, and makes for one of the best PS3 titles yet. Pick this one up.

[Ed’s note: If you get stuck in this game on a particularly difficult hole, take the words of Gary Potter to heart: “Harness in the good energy, block out the bad. Harness. Energy. Block. Bad. It’s like a carousel. You put the quarter in, you get on the horse, it goes up and down, and around. Circular, circle. Feel it. Go with the flow.”]