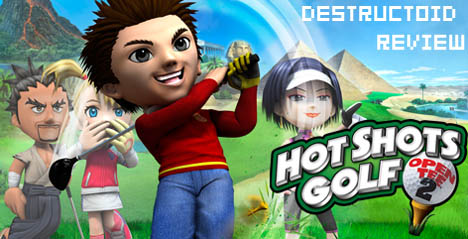 Sony thought that they were pulling a fast one (not really!) by sending Destructoid’s resident golf game whore (yours truly) the review copy of Hot Shots Golf: Open Tee 2 for the PlayStation Portable. It’s not hard to see their reasoning; I did give the recent PS3 release a pretty good score, and I’m constantly gushing about the series’ titles.

Sorry, guys. I’m not that easy. If anything, I’ll be more picky than usual. I’ll dish out the tough love as needed.

The Hot Shots Golf series has reached a high point with its latest PS3 and PSP releases, but will Open Tee 2 top them? Is this a hole-in-one? Is it a worthy successor that I can continue to gush over, or is it just an update that lands in the rough?

This game’s predecessor, Hot Shots Golf: Open Tee, was a stellar portable golf title. At the time of its release, it gave all previous versions a run for their money, and that includes the PS2 versions. The 2005 release went on to be a big seller for Sony and Clap Hanz, and eventually became a “Greatest Hits” title. In my mind, it still stands as one of the better PSP titles available.

Of course, the subsequent PS3 release, Out of Bounds, brought a whole bunch of new features to the course. Series fans were spoiled with a new swing system, high-definition graphics, and online multiplayer gaming. Open Tee 2 comes to us with the spirit of the original PSP game, along with a few of the new features of the new PS3 game.

Let’s get this out of the way first: the new swing system from Out of Bounds did not make it into Open Tee 2. [Check our our Out of Bounds review for more details on this system.] That’s a real shame, as I feel this system adds a deeper level of enjoyment and depth to the game. Granted, the subtle visual cues you’d normally see on a high-definition television wouldn’t have translated well to the PSP’s little screen, but I think some retooling could have made this possible. In the end, after having a taste of the new swing system, the old-fashioned power bar doesn’t seem as fun as it used to. Of course, I realize that every series game before Out of Bounds used this “traditional” shooting mode, and I liked all of those games. It was only a matter of time before I got back into the swing of things: X to swing, X to set power, and X again to set accuracy. If you’ve ever played any other Hot Shots Golf game before, the gameplay here is exactly the same.

One thing that did change for the better is the inclusion of online multiplayer, one of the best parts of its PS3 brother. Open Tee 2 sports both tournament and match play online, and both have made their way to this portable game system with great success. Much like in Out of Bounds, you can jump into any number of online tournaments in Open Tee 2. Up to 16 players in each tournament are supported, with options for regional and international play. Sure, it’s not as cool as taking on 50 golfers at the same time (like in Out of Bounds), but 16 international players is nothing to sneeze at. During the matches, your opponents’ locations are shown in real time with colored balls that have players icons floating over them. And, just like in Out of Bounds, you don’t have to wait for their turns to be over; all opponents play at the same time.

As much as I enjoyed the online tournament action, I liked the Match Play mode much more. This online mode will automatically choose an opponent and pair you up. You each take turns taking shots, and your victory is determined by total points scored, just like in the offline matches. If either player reaches 3UP, the match is called. What’s really fun is that all of the PSP’s face buttons are mapped to some kind of audible cheer or jeer during your opponents turn. You can opt to be the respectable opponent, or, if you’re like me, you can be as loud and disruptive as possible during critical moments in your opponent’s shots. Just be ready to accept the return fire during your turn. I know there have to be countless online players that hate me now!

Each match I played, tournament or match, went off without a hitch. There were always opponents available for either, and always plenty of tournaments to pick from. They don’t quite fill up like the PS3 version does, and there’s no nifty lobby to hang out in in the meantime, but the experience is pretty good for a portable game.

Aside from these new functions, Hot Shots Golf: Open Tee 2 offers up the additions you’d expect in a sequel: 12 new golfers (two dozen total), new caddies, and 12 total courses. Your golfer is also upgraded in a new fashion. For every victory, you’re granted a “wardrobe card,” which you can cash in for things like pink hair or a nice pair of coveralls. These items, aside from making you look cool, also upgrade your attributes. You can become a better golfer by wearing goofy clothing! Winning matches isn’t the only way to gain items; this time around, they’ve actually hidden certain items on the courses. You’ll have to do some looking, but there are some pretty weird items hidden out there.

Other than these, it’s basically the same old formula they used in the original Open Tee. Looking back at all the series’ games, the Hot Shots Golf franchise was never much for innovation. But we’ll take these great additions to an already winning formula. It’s too bad that the new shot system couldn’t make it in for this version. We’ll remain hopeful for the next one.

If you don’t mind that “you’ve been here before” feeling, and big-headed cartoon character arcade golf action, Hot Shots Golf: Open Tee 2 is great fun. There’s enough new content to make it worth the asking price over the original, and the new online multiplayer modes take this one well above par.

Score: 8.5 (Very fun — its essential gameplay aspects are cool and interesting, but may not be implemented in the best way.)