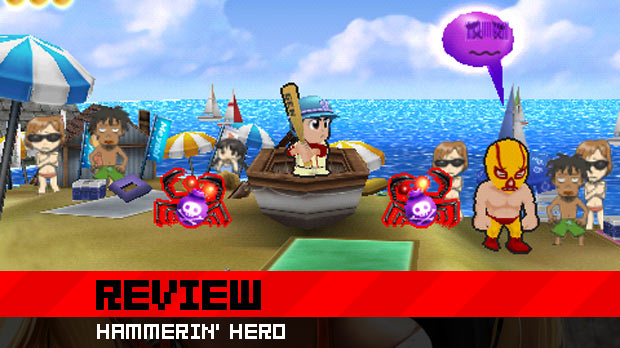 So Japan needs a hero? I guess. I dunno. I think America needs the hero right now. Hell, the PSP needs a old-school platforming hero just as bad. And I think we might just have one with Gen, the humble Japanese hammer-toting carpenter with an impossibly strong sense of justice.

Gen and his game Hammerin’ Hero swing for the stars with this crazy side-scroller, a game style that we see very little of these days on Sony’s portable. The game makes no apologies about being difficult or wierd, and we really appreciate that. Somehow this old style of game play seems new again.

Gen, our hammerin’ hero, starts out as a carpenter, but somehow he gets roped into doing just about every odd job out there in his quest to save his home town from evil Kuromoku Corporation, a construction outfit that cares more about money than neighborly love. So it makes senes that Gen eventually becomes a scuba diver, a sushi chef, a DJ, and even a baseball player, right? Not really? That’s what I thought, too. Somehow Hammerin’ Hero makes it look like it makes sense, though.

The guys at developer Irem must not have their heads screwed on right, as the side-scrolling action in Hammerin’ Hero is pretty strange. In your left-to-right journeys, you’ll do really weird things like bounce off the stomach of a sleeping man to avoid incoming enemies. Or take command of construction vehicles to defeat bosses. Or slap volleyballs with gigantic fish. It’s all in a day’s work. And really, you’ll be too busy defending the city neighborhoods from baddies to really think about how little sense your attacks make.

As you encounter enemies, Gen can attack with your typical overhead/forward smackdown, or a side attack that hits targets back into 3D space. And your occupation determines how your attacks work.  For instance, as a sushi chef, you’ll jab enemies in the face with nigiri sushi as a normal attack. But hold in the square button for a few seconds to charge up a side attack that lets you bash them into the background with a giant fish. As a baseball player, that side swipe attack lets you aim for the fences. Weird? Yes. Fun. Definitely.

Game play has you marching through the city, taking down Korumoku thugs usually in a one-on-one setting with your weapon, dodging projectiles and jumping over obstacles, just like you used to do in older 2D platformers. You’ll go through a dozen stages like this, encountering hidden power-ups, finding secret passageways, and talking down bosses in an epic battle that will have you retrying until you’ve figured out how to take it down. As difficult as it is in places, the control is not to blame here. It’s all you. Gen and his actions take a bit of getting used to at first, but you’ll soon see that Hammerin’ Hero‘s control is tight and responsive.

Gen has to wait this flame out.

Along the way in your work you’ll encounter citizens with worry bubbles over their heads. Take your weapon and smash that bubble, which in turn smashes that person’s worries away. At a minimum you’ll get a nice note of thanks. Best case scenario, these people will help you in battle, or even enable you to learn a new job. You’ll use these new jobs and their abilities to take down bosses, though it’s up to you to decide what job is best in each situation. In a menu screen, you read the various thank you notes you collect and check out souvenirs that you find. If you’re a collection fiend, you’ll love this.  In the end, though, when you boil it down, aside from the kooky setting and worry bubble mechanic, there’s really nothing new here in terms of game play. That’s not a bad thing, mind you.

As we said before, and as would be expected of Irem, this game is hard in places. You’ll struggle at first to take down bosses, even on the easiest difficulty settings. Some of the mid-level challenges take a bit of trial and error, too. Expect to die and continue, die and continue. Luckily, the game does provide help in the way of well-placed power-ups and a very convenient distribution of food. The food you find in your journeys can be utilized by your girlfriend. She’ll whip you up a nice lunch before you go out to work each day. Eating this lunch can do anything from granting you more power to letting you switch to another job completely. In the end, all of this eating and working pays off, as you’ll come across one of the craziest last levels ever for a platformer. I don’t want to spoil it, but let’s just say that another Irem property was a major influence here.

Visually, Hammerin’ Hero is a treat. Even though you’re doing the 2D side-scrolling thing, everything is set in lush, vibrant 3D. This mock Tokyo-like town looks great on the PSP’s screen. Gen and all of his big-headed friends and enemies also look great. And the bosses? They’re huge! Most of them are pretty funny, too. It’s just a pretty game overall, one that’s attractive enough to draw the attention of on-lookers. “Hey, what game is that?”

Hammerin’ Hero is fun, funny, and refreshing. I can’t think of another locally available PSP game that has this much wierdness and Japanese quirk. On top of that, it’s a nice trip back to a time where game mechanics were really simple, and your reflexes were put to the test. It may not be the longest game, at about 5 hours in length, but the old-school romp is definintely rewarding enough to warrant checking out.