[Editor’s note: The original Halo Wars review was written before I had completed the campaign. This is common in our industry, where reviewers have to make a judgment call as to whether or not they have played enough for review. A number of our readers disagreed with the judgment call made, The Incredible Edible Egg in particular, and as the debate has continued, we have decided to address the issue with a very simple fix.

The campaign was completed, multiplayer was given a run, and now we’re republishing the review. Very little has changed, because completion really didn’t add anything to the opinion, but I elaborated on multiplayer so this is a more comprehensive article for you.

Going forward, we’ll be aiming to bring a game to near-if-not-full completion, and will let you know if that is not the case. We’ve always preferred completed games, obviously, but sometimes it’s not practical. Please don’t expect us to play bad 70-hour RPGs 🙂

Real-time strategy is a genre underserved on consoles, and with good reason. The endless micromanagement and menus that come with RTS titles do not lend themselves well to limited console controls, but with Halo being the darling of the Xbox platform, there was no other place for Halo Wars to go.

Ensemble was charged with building Halo Wars for the Xbox 360 from the ground up, as well as creating an RTS title that believably sat within the Halo universe. Those are two pretty tight restrictions, not to mention the fact that your typical Halo fan is … well … a Halo fan — at home with first-person shooters and action-packed violence. Not a strategy junkie.

It was surely a tricky balance to strike, a console RTS that appeals to Halo fans. Just how well has Ensemble managed to meet the requirements? Read on, and watch our video accompaniment, as we review Halo Wars. 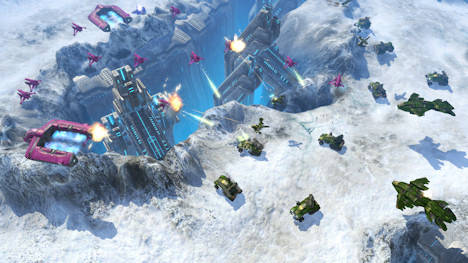 As a prequel title, Halo Wars is set twenty years before the events of Halo: Combat Evolved. The UNSC forces are in the midst of their earlier conflicts with theocratic alien zealots The Covenant, as the two sides wage war over Harvest, a planet with which The Covenant wishes to do typically nasty stuff. Wars revolves predominantly around Sgt. Forge and Professor Ellen Anders, whose strained relationship is barely elaborated on, yet so typical you’ll never need to ask for a pointer.

The story is rather basic but will likely be loved by those who have a thing for Halo‘s lore. Unfortunately, I am not one of those people and I must say that Halo Wars‘ plot did little to warm me to the game’s universe. The characters are distinctly unlikable, which makes it difficult to care about the Campaign Mode. Perhaps if you could play a Covenant Campaign, it would be more enjoyable, but unfortunately you have to start with the UNSC and their band of wooden, uptight stereotypes. 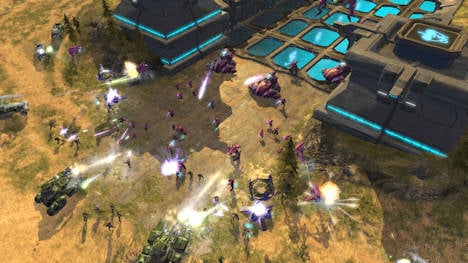 The story is inoffensive, but bland. Not badly written, but hardly exciting. The gameplay is not much different.

Halo Wars is a good game, and that’s really all that needs to be said about it. As far as console RTS games go, it’s good, solid, dependable stuff. Like a well-behaved dog or a favorite meal. Safe and unadventurous. It’s the kind of RTS game that anybody could instantly be familiar with, containing all the hallmarks you’ve come to expect from the genre since the early nineties.

Unfortunately, the game is so standard that it will never threaten to achieve greatness. By walking the road of dependability, Ensemble certainly created a game that will disappoint very few people, but will impress barely anybody. While the game does only a few things wrong, the repetitive and often dated nature of the gameplay will see some players struggle to find the will to keep playing through the campaign, as the prospect of building yet another army from scratch looms over each battle. 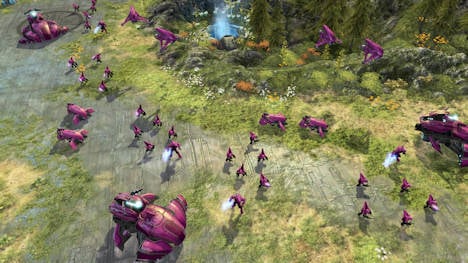 To Ensemble’s credit, a few interesting and tricky missions have been thrown in. Stages that feature the destruction of a giant, incomplete Scarab and a hasty evacuation from the grasp of a “mysterious” enemy help to break up the pace, and work so well that it’s almost a shame the game is so traditional and didn’t try to shake things up more.

Replaying missions has also been encouraged, thanks to obligatory optional objectives that you likely won’t completely satisfy the first time around. The completion of optional missions yields Skulls, which can be collected around each map. In addition, skilled explorers will be able to uncover Black Boxes, which will reward players with extra storyline information.

For those who wish to tackle human opponents, Ensemble have naturally thrown in multiplayer options that work both over Xbox Live and via System Link. Multiplayer works how you’d expect it to. Matchmaking is fast and smooth, and RTS fans should be able to find plenty of opponents. Even though the game is only out in the PAL regions right now, it wasn’t too difficult to find a game.

As far as the two races go, it has to be said that the UNSC has a clear advantage. The Covenant go for a “weak but many” tactic, but having a lot of units seems to just provide more targets for the gleaming UNSC machinery. The Covenant are definitely for more advanced players, and it’s recommended that those less confident in their strategizing stick with the Spartans.

Co-op play is also included, but at the time of writing, it seems impossible to get one going. First of all, everybody is playing versus games, and secondly, trying to get a game set up with Dtoid reader Sup3rT3d led to nothing but “cannot connect” issues. Hopefully, other players won’t have such problems. 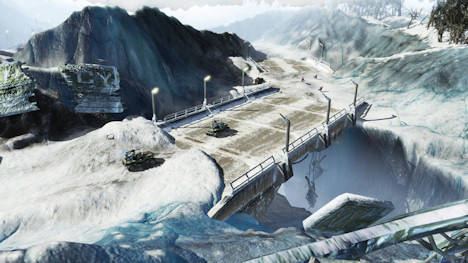 As I said, there are a only a few faults with the game, but they are indeed there. First of all, the game feels rather limited, both by in-game restrictions and the obvious fact that everything is tied in with the established Halo fiction. The units on each side are not very varied, and while the extra customization options for each one are welcome, you never feel like you get much to play with. This is made even more apparent by the fact that army population sizes are quite small, even when you upgrade your forces to include more units. The game’s omnipresent announcer will frequently have to inform you that you’re at maximum capacity, so get used to it.

Halo Wars can also be pretty slow going as well. While RTS veterans will be used to the grinding accumulation of resources, the slow wait for supplies and power in order to build one’s army doesn’t really work with Halo Wars, which often impresses urgency upon the player. Many times you’ll find yourself oppressed by enemy forces, but unable to fight back with glorious vengeance because your supply depots are slower than Lennie from Of Mice and Men. It can be quite frustrating, especially knowing how long it can take to replace your lost units. 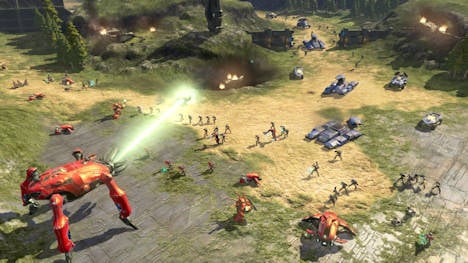 One other major issue with the game is the horrible navigational map that just shows everything as a circle of cluttered brown mess. With so much going on during a standard mission, it’s understandably difficult to create a map that reads clearly and informs the player of what’s happening. However, this impossible creation doesn’t even come close.

These issues aside, Halo Wars is a game that is sure to appeal to many. While individual unit selection is a bit tricky and the “Local Units” selection doesn’t seem to want to limit itself to just on-screen allies, Ensemble did a decent job of making the title work with a restricted Xbox 360 controller. The simple, unambitious strategy gameplay should also succeed at warming hardcore Halo loyalists to a totally different genre, even if the game can get quite irritating on the higher difficulties.

It’s aesthetically decent, the typically grand and pompous music is there, and the units, buildings and environments all look authentic. Fans will doubtless get a kick out of being able to organize a squad of Warthogs into running over defenseless Grunts. Visually and aurally, this is unmistakably a Halo game, one that follows the efforts of Bungie without ever betraying that it was born of another studio. 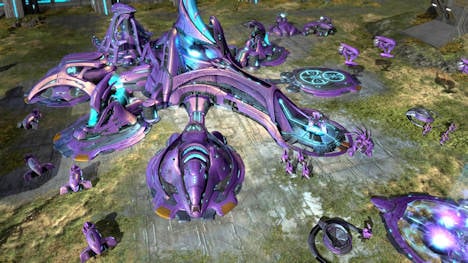 Whether or not you should buy this game really depends on how much you love Halo, something which I’m sure you could figure out for yourself. Hardline RTS players will not feel fulfilled by the streamlined gameplay, and those who never much cared for the exploits of Master Chief will not be dazzled by the fan service on offer. If you can’t tell your Arbiter from your arsehole, then you probably won’t want to spend the money. However, if you played the games, bought the novels and wore the T-shirts, you ought to be satisfied with money spent.

Halo Wars is good. I personally wouldn’t pay sixty bucks for it, but I can’t say it’s bad.