Call it what you like — milking a franchise or delivering what the market demands — but Activision have made no bones about exploiting their key titles. Among them is the highly successful Guitar Hero, the first signs of this being last year’s Guitar Hero Encore: Rocks the 80s, the mediocre (but full priced) Guitar Hero II “expansion.”

Now Activision are actively planning to introduce band-specific titles to the market, even on the heels of announcing that they’d be supporting the upcoming Guitar Hero World Tour title with significant downloable content. Metallica has already been confirmed, and with other names aleady being thrown around, it seems we’ll see a number of band-specific Guitar Hero titles in the near future.

But can an entire band carry a single game? Activision decided to start it off with a bang, giving Rock and Roll Hall of Famers Aerosmith their very own Guitar Hero game, Guitar Hero: Aerosmith.

Does the expansive library of the Boston rockers stand up, or is Guitar Hero: Aerosmith the poster-game for downloadable content? Answers after the jump.

At this point, I believe we’re all familiar with the way a Guitar Hero game works. Basically, you buy a cheap plastic guitar and hit colored buttons in the sequence that the corresponding colored lights show up on the screen. The vast majority of the time, these colored lights stand for musical guitar notes, while a somewhat trendy song plays in the background. Guitar Hero is all about the suspension of disbelief and the ability to maintain a certain level of patience with redundancy.

The sequels to the Guitar Hero franchise work much the same way. Guitar Hero: Aerosmith surprisingly features the band Aerosmith. After my initial shock that the band was included in the package, I noted that despite focusing on a single band, the game feels ridiculously stale. Considering that the game came out after Rock Band, one would assume that vast improvements would have been made. In fact, it’s hard to spot many changes from Guitar Hero III or even II. The save system is still clunky, the menus are still boring, the tablature all looks the same, and even the way the game handles the set list is still very much the same. The same cast of characters has been recycled, and the rewards are still given out in the same intervals. 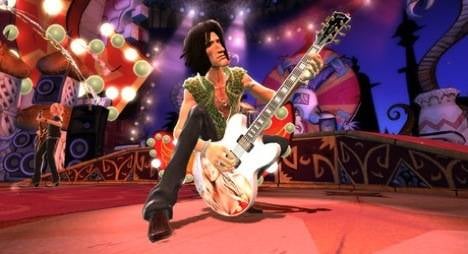 The single-player campaign functions just like any other Guitar Hero, but instead of cheesy cartoons, we get little 10 second ADHD clips of the members of Aerosmith talking about their career as a band and, specifically, the venues where they played. Beyond just providing segues to the various venues in the game, the idea was probably to make the gamer feel more acquainted with the journey of Aerosmith, but I was left wondering who the hell put together the epic mess of cuts and zigzags between separate interviews. Naturally, the game features many songs by Aerosmith, but before you can play them, you have to go through a wondrously boring assortment of crappy rock titles including “Always On the Run” by Lenny Kravitz and “She Sells Sanctuary” by the Cult.

I could have done with more Aerosmith and less trivial music. One of the biggest letdowns was the decision to feature songs like “Beyond Beautiful” and “Movin’ Out” instead of “Janie’s Got a Gun,” or “I Don’t Want to Miss a Thing.” There’s really no point in having a game revolve around a band when you miss on songs this popular. Aerosmith has a piece of the collective music consciousness. Why not utilize the library more appropriately?

The biggest and most noticeable improvement is in the visual department. Aerosmith looks decent, but there’s something about Steven Tyler’s gaping maw that is incredibly unnerving. The backdrops, motion capture, and atmosphere have been reworked in such a way that it adds a new layer to the experience. Unfortunately, this is a rhythm simulation game, not a NVIDIA commercial. I did appreciate how much more convenient the Medium difficulty has become, but the jump to Hard is still as ridiculously difficult as before. Can I have a medium-and-a-half already, Neversoft? 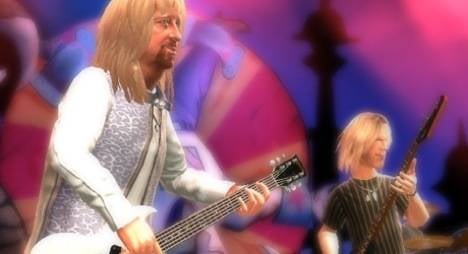 The multiplayer, unfortunately, remains the same as Guitar Hero III. The same four modes (Face-off, Pro Face-off, Battle, and Co-op) feel as excessively dry as the entire package does. The online component functions fairly flawlessly, with little lag and few kinks. The biggest issue that I have with online, is the lack of substance. There is little reason for a player to stay in a match, or even complete a single song.

Overall, Guitar Hero: Aerosmith is Guitar Hero wrapped in a really good gimmick. Aerosmith is a fun and exciting band to the right people, but the core gameplay is too stale to really warrant anything more than an average score. For me, this newest incarnation of the series is a lesson in “playing it safe.” At this point in the series, I expect new game modes, online components, better cooperative play, enhanced interfaces, and cohesion. Guitar Hero: Aerosmith is nothing new, and that’s unfortunate.

Score: 5.0 – (Aerosmith or Guitar Hero fans should probably pass on this title. As I stated numerous times, this game feels as old as Aerosmith is. And that’s like, ancient man. Newcomers should just invest in Rock Band. It offers more for your buck.)

Turns out this is a noble but failed effort. Outside of some rushed documentary-style cut-scenes and some new art assets, Guitar Hero: Aerosmith is, well, Guitar Hero III with Aerosmith shoehorned into it. In theory, this isn’t necessarily a bad thing; fans of the series get more of the same gameplay that they love and Activision writes the checks. Unfortunately, Guitar Hero: Aerosmith is the most boring installment of the series to date, mainly due to the game being (mostly) locked into the song library of the aging rockers from Boston.Of course, this all comes down to personal opinion; so if your favorite records are Aerosmith’s Pump and Toys in the Attic or you have an affinity towards Steven Tyler’s pterodactyl-like vocals, this is the game for you. But for a casual listener of Aerosmith’s music, I found the set list to be excruciatingly dull, even more so as I trudged on through the set list, with a serious lack of recognizable and fun to play “hits.” The game is a mass market title, give me some mass market music; keep your “Uncle Salty”  — where’s “Janie’s Got a Gun” or “Dude Looks Like a Lady”? 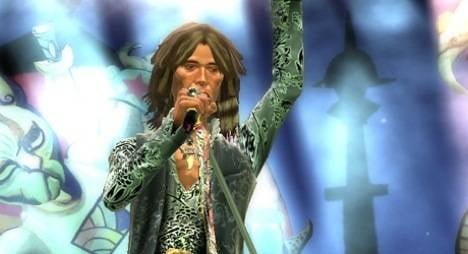 Fortunately, the game’s set list is not completely dominated by Aerosmith, as the soundtrack is fleshed out with songs by bands that presumably have influenced or have been influenced by the “Bad Boys from Boston.” Unlike Brad, I found the “assortment of crappy rock titles” a welcome respite from Joe Perry’s repetitive, never-ending flurry of blues-rock riffage. Unfortunately, those songs are equally as boring; the game kicks off with a master recording of Cheap Trick’s “Dream Police,” a song in which lead singer repeats the words “dream police” no less than 93 times over a single riff.

The game’s visuals are on par with Guitar Hero III, which is to say that it looks clean and sharp in high-definition, but is marred by archaic animations and ugly, unfortunate design choices. If any members of Aerosmith were motion captured in a studio to bring their digital avatars to life, it was a waste of their time. Steven Tyler looks like an old puppet, an exaggerated version of an already ridiculous old rocker, his lips flapping up and down without purpose. Guitarist Joe Perry struts and jives, rocking robotically on stage, perhaps performing signature moves that would be recognizable to fans (taking of his belt and using it to whip his guitar, for instance). As in real life, the remaining members of the band fade behind the animatronic Toxic Twins, looking bored and lacking any real personality. The best you can say about the game is that it’s still Guitar Hero. The gameplay is relatively tight, and the timing for hammer-ons and pull-offs has been tweaked, making it easier to nail some of the game’s faster sections. Difficulty has been adjusted as well; Brad complains that “Hard” is too difficult, but I found it to be just right. While I’m still having nightmares about the first time I played Guitar Hero III‘s “Raining Blood” on “Hard” (and still have not defeated the game’s final boss), I breezed through Guitar Hero: Aerosmith‘s “Hard” difficulty without a single fail. I found many of the “Expert” songs to be lightly challenging, but did notice that notes were added to these charts that were in time with the music, but didn’t necessarily represent actual notes in the song (the main riff in Lenny Kravitz’s “Always on the Run” comes to mind). 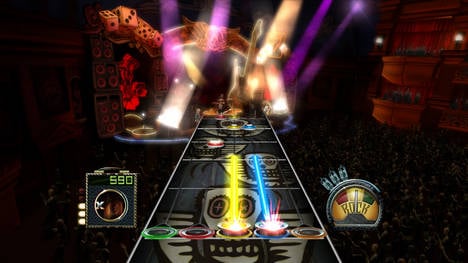 The game features all of the same modes found in Guitar Hero III, including versus, cooperative, or online functionality. Even so, there’s very little replay value here; in fact, if there’s anything I wanted to when I finally trudged through the game’s career (both cooperatively and by myself), it’s to play a game with a more varied and interesting soundtrack.

Which leads to the burning issue: outside of marketing it as its own product at retail (and making a ton of cash in the process), there’s no reason why what truly defines Guitar Hero: Aerosmith (the music) couldn’t have been offered as downloadable content. Even for the true Aerosmith fan, it’s hard to believe that some band-themed arenas, exclusive documentary footage, and the digitized rockers would offer enough to warrant a full price tag.

Score: 5.0 – (If you’re not an Aerosmith fan but like the Guitar Hero experience, this title might keep you mildly entertained for one or two play sessions. If you are a true Aerosmith die-hard, my advice is to wait until they release this material as downloadable content for the upcoming Guitar Hero World Tour; what’s offered here is not enough to justify the standalone cost.)