But what do we at Destructoid think about it? Is it as great as everyone makes it out to be or is what you’re hearing just a bunch of hype? Take a look at what we think after the jump. 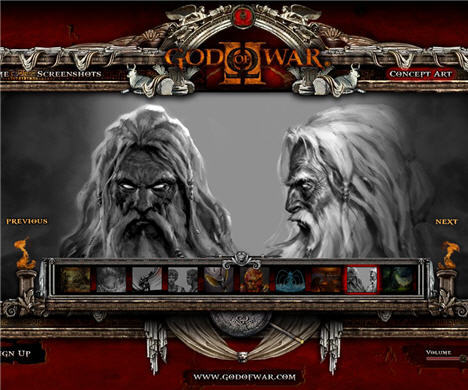 Does God of War II live up to the amazing standard set by the original? To put it simply, yes. To put it more dramatically, hell yes!

In my humble opinion, to call a game a classic it needs to contain some key moments that will go down in video game history. You know, those moments that you will never forget for the rest of your life. Remember riding under the missiles in Contra III: The Alien Wars? Or how about the opera scene in Final Fantasy VI? God of War II contains a plethora of these moments that easily ascend it to the rank of true video game masterpiece.

I love my God of War games epic, and this one delivers in spades. Moment after moment is classic, and just like in the original, each one seamlessly blends into the next, jumping from over-the-top action to mind bending puzzles with ease. So much ease, in fact, that it makes other games of the type look horribly designed in comparison. God, I wish I could go into more detail about which scenes in particular blew my mind, but to avoid spoilers I will just say that most of them were played with a huge smile on my face (hint: I almost had a joy explosion once Kratos mounted a Pegasus).

There were two things that got me worried about this sequel during the months and months of hype. First off, I was concerned that it would feel like more of the same. The good news, as my sigh of relief proved, this is not an issue. Sure, the game feels remarkably similar to the first God of War, but not once did I bore of the gameplay or crave more innovation.

The designers must have known what they had was working and wisely decided to not fix what ain’t broken. The few new features they did add (new items, more bosses, etc.) are just the right amount of change to make the game feel fresh without losing the appeal so cherished in the original. It also helps that everything feels tighter and more cohesive than in the first game as well (and major props for not having to climb those annoying rotating blade-filled towers on this sequel — huzzah!).

As a person who has purchased a giant high-definition plasma television in the time since playing the original God of War, my second concern was that poor Kratos would not look so good when blown up to fifty (gloriously detailed) inches. I can’t remember what it sounded like exactly, but the noise I made once I saw how great the newly added progressive-scan and widescreen modes looked on an HDTV was pretty close to that of a giggling school girl. To put it mildly, the game looks nice. Really nice. So nice in fact, there were many times I had to ask myself how the PlayStation 2 was producing visuals that looked so good. Just wait until you meet Atlas — you will know what I am talking about.

From the first tutorial stage to the ridiculously epic final sequence (still drooling), God of War II really is something special. It raises the bar for action/adventure games and really can’t be missed. Any true gamer will be worse off having not experienced some of the moments this game has to offer. If you own a PlayStation 2, then there really is no excuse not to go out and buy what is sure to become a true classic that will easily withstand the test of time. Summary: I like this game. A lot.

The keyword in God of War II is “more.” There are more enemies, more puzzles, more boss fights, and more abilities — not to mention that the game is almost twice the length of the original. But while it’s nearly impossible to fault a game for having more of the things we all loved from the original, it is worth mentioning that this “more” attitude creates some problems of its own.

Take the boss fights, for instance. Arguably one of the biggest flaws with the first game was that its incredibly fluid combat system was put to task in only two or three “real” boss fights. God of War II ups the ante and includes at least three times as many of these much beloved boss fights, but loses something in doing so. The boss fights, though more numerous, are relatively easy by comparison. Most fights require nothing more than an extended amount of button mashing followed by the Dragon’s Lair-esque timed button cutscenes, seen in the first game, to finish the boss off. As a result, none of the bosses really feel like “bosses,” in the strictest sense: literally all of them feel like minibosses, as if they are leading up to some colossally difficult battle that never actually comes. It’s quite easy to finish defeating a slightly more difficult enemy, and only afterward realize, “Wait … was that supposed to be a boss fight?” It’s the same deal with the puzzles: there are more of them, but they’re generally much easier.

In a general sense, these types of encounters give GoW II an abnormally weird pace. Unlike the “objective, completion, climax” pattern that gave God of War its kick, it often feels like GoW II just haphazardly throws things at you, with little care to how they fit in the general flow of the game. None of the individual challenges the player faces are very difficult, and the result is not unlike being repeatedly slapped in the face with an oven mitt (but an oven mitt of awesome, nonetheless): the player is given regular, simple, fun challenges, but with no real buildup and no real payoff. As a result, the game takes on a very plodding pace.

However, that isn’t to say that the gameplay isn’t insanely fun by itself. All the new elements, from the added weapons, to the platforming sections, to the Pegasus levels, to the story (if you thought you killed a lot of innocent/good people in the original God of War, you haven’t seen anything yet), all the way up to the cliffhanger ending, lends itself to truly fun gameplay, when taken on its own. I’d elaborate, but it’d honestly spoil the surprise (not to mention that these reviews have to be relatively short).

All in all, God of War II is the perfect game to play in short bursts. Everything you loved about the original is still here, along with some new gameplay elements that are truly entertaining — just be aware that those new additions are a double-edged sword when you consider the overall structure of the game.

What’s the story with the box artwork for this game? Bland and uninspired, I’d as soon pick up a copy of Ruff Trigger: The Vancore Conspiracy as I would pick up God of War II, based on its North American artwork.

And that’s where most of my negatives about God of War II begin and end, as Cory Barlog and his team at SCE Santa Monica have successfully toppled the giant that was the original. Larger in scale and scope, God of War II picks up where the last game left off and never lets go. Building on everything that made the first game what it was, God of War II seems to trump it in nearly every significant category.

The original game pushed the PlayStation 2 to its limit, but the sequel truly shines as one of the most gorgeous experiences of this generation. The set pieces and overall art design are striking, and the environments are markedly unlike anything seen in the first title. So while the game feels the same on many levels (controls, and even some combos, are fundamentally the same), it’s a decidedly different and more polished experience.

This time around, Kratos wields two additional weapons, above and beyond his Blades of Chaos, all of which are surprisingly useful in various situations. The same can be said about the magic available, which this go around will all find a place in Kratos’ arsenal. Knowing what magic to use and when can will help you slide out of some tough situations.

The game, nonetheless, is not without its flaws. The fixed camera found in the first game makes a return, and while you’ll find it’s exactly where it needs to be in most instances, it sometimes finds itself in frustrating positions. Most of the games puzzles are straight forward, requiring very little thinking, but are often made more difficult by unclear goals or objects that blend into the environment. In some areas, I found myself wracking my brain for quite sometime before accidentally stumbling upon obvious solutions that weren’t made apparent at the outset (a hidden nook or an oddly placed switch, for instance).

The game also never lets up, and while that should be a good thing, it lends itself to the same problem the original had. The opening area (the much talked about Colossus battle) is so astonishingly ambitious (much like the Hyrdra battle in the first game), that it’s difficult to top as the game progresses. And while God of War II keeps up the pace, it never really seems to exceed what came before it. Still, nearly everything you’ll have Kratos doing is awe inspiring in one way or another.

Which is why it’s not surprising to hear that some people are a bit disappointed with where, and how, the game’s story ties itself off at the end. Brutal, intense, and just damned fun, nothing about God of War II should leave you feeling like you wasted your time. With tons of unlockables and extras (including a second disc that comes standard with all copies of the game), the only thing that should excuse you from experiencing God of War II is a pair of clown shoes.

Filed under... #Destructoid#God of War