I guess I shouldn’t be complaining that it was less than a year ago that I was sitting down to write a review of God of War II. Like the first game on the PlayStation 2, I loved the sequel, and was pretty thrilled to hear (immediately upon release of God of War II, actually) that Ready at Dawn were hard at work on a portable Kratos adventure for the PlayStation Portable. When it comes to all things ashen and baldy, I’m optimistic, especially considering Ready at Dawn’s impressive portable Daxter adventure. So I was convinced that Kratos’ first portable foray, God of War: Chains of Olympus would be at least good, if not as great as its console brothers.

You’re sick of hearing it, and I’m sick of writing it, but here I go: the God of War games are “epic.” Epic set pieces paired with epic, over-the-top gameplay. An epic score that helps bring to life an epic story. Epic, epic, epic. Take a deep breath, because here it is – Chains of Olympus is an epic game. There, I said it. But it’s also important to keep in mind that while the key words used when talking about God of War II were “bigger” and “more,” the PSP title is a noticeably smaller experience.

The smaller scale really shouldn’t come as too much of a surprise; fitting an entire God of War adventure onto a UMD is a huge undertaking. But the fact is, in spite of its smaller stature, Chains of Olympus can easily hold its own alongside both the original tile and its sequel.

God of War: Chains of Olympus (PlayStation Portable)
Developed by Ready at Dawn
Published by Sony
Released on March 4, 2008

Call this “God of War Gaiden,” if you will. As a side-story (the game is in fact a prequel to the first game), it fits in nicely with the rest of the series’ narrative. As anticipated, you’ll find Kratos screaming names at the sky in anger and/or earnest; in the original it is repeated shouts of “Ares,” and in the sequel we heard recurring screams of “Zeus.” In Chains of Olympus, well … I don’t want to give too much away here.

But it should be known that Ready at Dawn have put together a well-crafted narrative that’s not only more subtle than fans might be used to, but in many ways more emotionally gripping. One interactive cut-scene in particular comes to mind that plays out in such a way that had even my cold, insensitive heart skipping a beat. It’s moments like this help create an emotional attachment to Kratos as a mortal who has (or once had) an actual soul, and it’s easily one of the sharpest moments in the series. 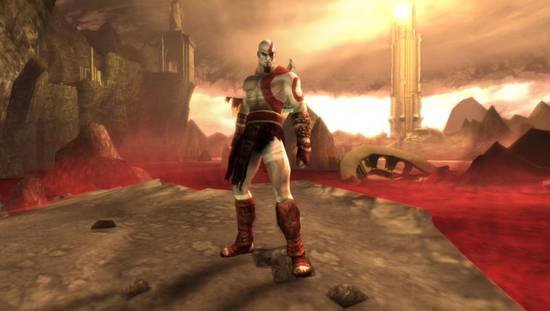 Now this might sound like one, but calling Chains of Olympus’ gameplay “God of War Jr.” is not an insult. In fact, considering how faithful the game is to its predecessors, it’s hard not to be impressed. It’s necessary to remember that we’re comparing a PSP game to a PS2 title; in most cases, you’ll find that the portable title loses more than a few key elements that made the game great in the first place. This is simply not the case with Chains of Olympus. Ready at Dawn have done an admirable job of mimicking everything that made the action of the series so great.

First and foremost, as much as I might like the PSP to be a Dual Shock controller, it most certainly is not. The lack of a second analog stick (used to make Kratos evade on the PS2) was something that was cause for concern when the game was first announced. An interesting and workable solution was found — holding L and R together in conjunction with the PSP’s analog “nub” makes Kratos evade and roll. While it’s a bit awkward at first, it all becomes second nature before too long. The game does a great job of introducing you to the mechanic via an early boss battle, and one could even argue that the gameplay benefits from the lack of a second stick. The “L/R” method frees up your second thumb, so at no point during the gameplay will you have to move your fingers away from the all-important jump of offensive buttons.

Other than that small change, not much is different about the controls in Chains of Olympus. Fans should feel right at home with Kratos’ moveset, as many of his signature combos (or variations of) are included. Like on the consoles, combat feels tight, right, and fun. (Insert mother joke here.) And it’s a good thing, because there sure is a lot of it included here. While there are smatterings of platforming and rudimentary puzzles here and there, anyone looking for a real challenge in that area is going to find themselves disappointed. Most of the “puzzles” are straightforward affairs, like pushing an obvious statue to an obvious pressure plate, or pulling an obvious statue to a less obvious pressure plate. 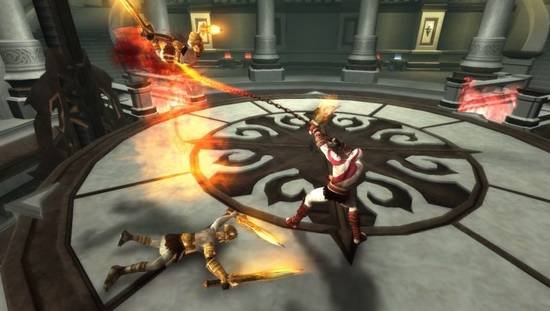 Fans looking to flex their brains may cry foul, but one could argue that God of War’s strength has always been in its combat. You’re more likely to find Kratos ripping a room of undead soldiers apart with the Blades of Chaos than you are to find him sharpening his favorite Sudoku pencil. In terms of weapons, magic, and abilities, Chains of Olympus does seem like it skimps when compared to both console titles. It’s disappointing that some of the elements introduced in God of War II aren’t found here (swinging from point to point, a variety of weapons, etc.), but it makes sense considering many of them were “learned” by Kratos later in the series’ timeline.

Ready at Dawn does introduced a fun weapon that I’d like to see explored in future titles, the Gauntlet of Zeus. This brutal weapon essentially turns Chains of Olympus into a classic beat ‘em up, with Kratos punching his way through rooms of enemies and breaking through previously impassible objects. The gauntlet feels great, and it was fun to have Kratos rock a room of enemies with nothing but his fists.

If you’re wondering when I’m going to start raving about how great the game looks and what a technical wonder Chains of Olympus is for the PSP, here it comes. Unless you’re blind, it’s easy to tell just by looking at the screenshots that Ready at Dawn have brought some seriously impressive visuals to Sony’s handheld. In fact, it’s not a stretch to say that not only is it one of the best looking games on the PSP, it actually looks better than some PS2 titles.

Certainly, the visuals in God of War II are held in high regard; it’s definitely a title that pushed the limits of Sony’s aging console. While it’s definitely not as detailed as on the PS2, the fact that the portable game’s visuals even come close to that of the console is an amazing accomplishment. Additionally, there’s little to no loading times when moving from area to area. It seems like it was only yesterday that load times that spanned minutes were the norm. With this in mind, it’s sometimes easy to forget you’re even playing the game on the PSP. 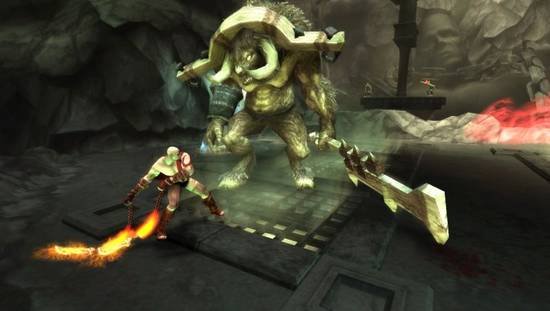 Chains of Olympus will even sound familiar to fans, with all of the appropriate talent on board for the portable title. The epic score composed by Gerard Marino makes a return, with familiar bursts of tunes mixed in with a variety of fresh musical pieces. T.C. Carson is back to fill the vocal cords of Kratos, and the motherly-sounding Linda Hunt returns for narration duties. It’s all appropriately “epic,” and brings the entire package together, which helps Chains of Olympus slide smoothly onto your shelf alongside the PS2 games.

If there’s one time when calling the title “God of War Jr.” is a negative, it’s definitely in its length and scope. It’s not unlikely that you’ll finish the game somewhere between the five and six hour mark during your first play through. This is half as long as the original, and only a fraction of the length of God of War II. The game also lacks a number of a significant boss battles; there’s only a single massive monster/boss battle, and it takes place early on in the game. When you finally do make it to the final battle, you’re left wondering if you might have missed something along the way. Additional content should expand the life of the game however — included are a number of unlockable costumes, a series of “Challenge of Hades” levels, the brutal “God Mode” difficultly, and more. 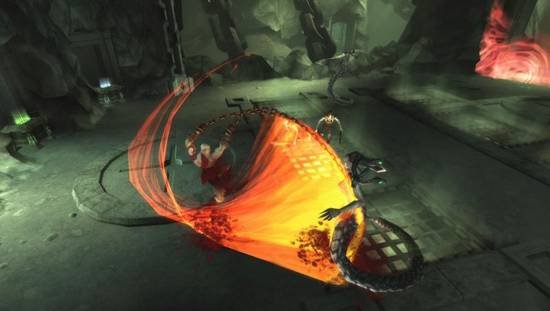 Really, there’s nothing else like Chains of Olympus on the PSP. Forget the fact that it’s an extremely polished portable version of an already well-established console franchise. The game holds its own, but it’s noticeably lacking when put toe-to-toe with the PS2 God of War titles. But taken on its own merits and within the portable space, Chains of Olympus is the best of its kind, and PSP owners who are fans of the genre shouldn’t miss it.

To the God of War fans that have been waiting to pick up Sony’s handheld, here’s your cue. You want to know what Kratos is yelling about this time, right?

Filed under... #God of War#PSP