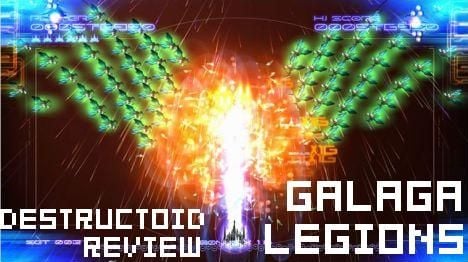 Oh, Galaga Legions. A game that should well be one of the most anticipated XBLA titles of this year given its developer’s street cred (it’s by the same folks who made the wonderful Pac-Man Championship Edition) has been more or less pushed to the wayside by the three other incredibly good, incredibly high-profile titles to come out of the Xbox Live Summer of Arcade.

With games like Geometry Wars 2 and Braid and Bionic Commando out, and with Castle Crashers less than five days away, one might not be blamed for asking the obvious: why should anyone give a rat’s ass about Galaga Legions?

You don’t need to be familiar with the original Galaga to enjoy Galaga Legions. I say this from experience, because I’ve never played a single round of Galaga in my life yet I still think Legions is a pretty good time.

Legions differentiates itself from other shmups thanks to a seemingly minor mechanic: in addition to the player’s main ship, which can only fire straight up, the player also controls two smaller support ships that can be deployed in any area on the screen and made to fire in one of four directions (up, down, left right). As enemies will come from all four sides of the screen, Legions becomes an exercise in forcing the player to use the support ships to his advantage. You can keep the support by your side and experience awesome northward firepower, but you’ll be totally defenseless everywhere else. In order to survive, you’ll have to space your ships out along the screen, pointing them in the direction of incoming threats and constantly repositioning them to deal with the numerous waves of enemies. 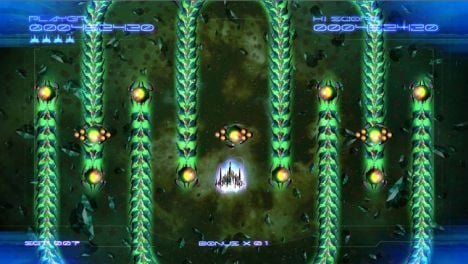 The other noteworthy game mechanics all complement the main, support ship mechanic. Your ships fire faster the closer they are to the enemy, thus forcing the player to choose between distance and safety from projectiles or close proximity and the possibility to kill the bad guys quicker. The enemy chains often include a single combo ship, which, when destroyed, causes a reaction and destroys the rest of the chain, often making it important to feint with your main ship while your support fires at the combo ship. The location and intended movement pattern of each wave is shown to the player a second or so before the enemies actually arrive, so the player can plan their support ship placement before the main attack.

The support ship mechanic is a very small thing that goes a very long way — simply by forcing the player to constantly reposition his support ships and balance his firepower over a very large area in four different directions, Galaga Legions is actually one of the most consciously strategic shmups I’ve ever played. Much of the game still relies on hand-eye coordination and the ability to maneuver your way through waves of bullets and enemy ships, yes, but in order to survive you’ll need to truly think about where and when to place your ships. Hell, an automatic fire option is even provided, so you can focus more on thinking and maneuvering as your ships spout endless bullets without your ever having to touch a single button. 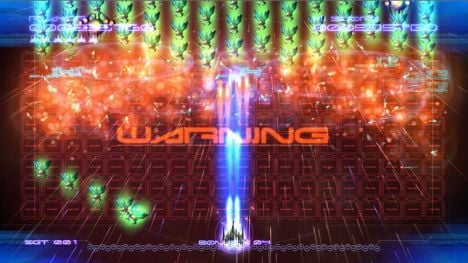 Galaga Legions comes with two play modes: Adventure, where the player must fight through all five levels with only four starting lives and no continues, and Championship, where the player can take each level individually and work toward a high score.

The levels are too damn hard for Adventure Mode to be terribly fun to anyone but the most hardcore of shmup fans, and though each of the levels are incredibly fun when played in Championship Mode, determined players will be able to beat, if not master, all five levels within an hour or two of play. Since all the levels are unlocked from the very beginning, you’re not going to be spending weeks on end trying to learn boss attack sequences and memorize enemy patterns in order to open up the new levels via Adventure Mode, so much as you’ll just be honing your support ship strategies over a few hours or days to beat the Championship stages individually. 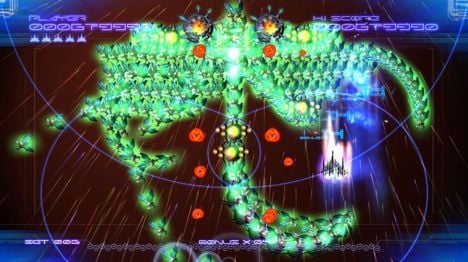 Though the five levels are fun, there simply isn’t all that much content in Galaga Legions, which is awfully surprising given how interesting and well-implemented the support ship gameplay is, not to mention the varying enemy types. By way of comparison, Pac-Man Championship Edition had six different modes of play, each drastically different from the other. Galaga Legions only has two modes of play, and they’re essentially identical save for the fact that one is balls-hard just for the sake of being balls-hard. As much fun as I had with the game, and as loudly as I shouted “BOOM, MOTHERF*CKER” upon beating the final boss, I just don’t see myself coming back to Legions anytime soon. It’s short and difficult and clever, but the lack of interesting modes or significant twists on the core mechanics make the game short on replay value.

If you really love imaginative, difficult shmups, then Galaga Legions will definitely satisfy you. The graphics are gorgeous (the alternate visual modes, like “Classic” and “Ancient”, are just as cool-looking as the new, default graphics), and its simple-yet-deep mechanics offer shmup gameplay unlike any we’ve seen before. 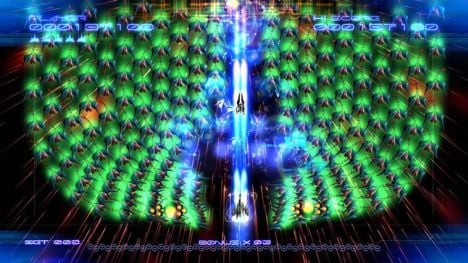 Yet once you’ve finished all five levels, there’s just not much else to do outside of trying to max out your score, or masochistically trying to get through the Adventure Mode. Galaga Legions is a fun, imaginative XBLA game that I’d recommend in a heartbeat during almost any other time of the year — but given its lack of content and the other, much more impressive games from the Summer of Arcade, Galaga Legions might not be for everyone. Not until everyone’s tired of Castle Crashers, anyway.

Score: 7.5 (Very fun, but has large flaws that, while not game-ruining, prevent it from reaching its full potential.)