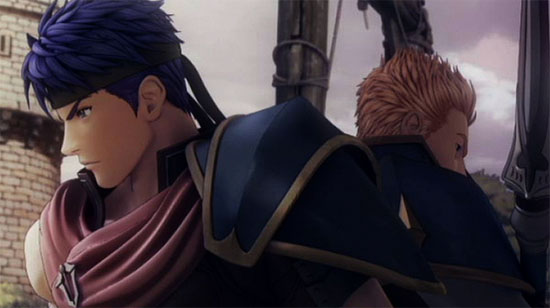 I hate tactical games. I hate strategy games, real-time strategy games, and tactical RPGs. I would rather drive screws into my nostrils with the business end of a power drill and, of course, apply a nail gun to my eyes than play a tactics title. But Linde stole all my Castlevanias, kidnapped my cat and said I can’t play Trauma Center until I wrote this review. I drove a few screws into the soft part of my skull in an attempt to assuage his evil, but alas, he made me do it anyway.

And I, consummate professional that I am, picked myself up from the kitchen floor still moist with the tears of my tantrum and set out to give this one a good, fair shake. Perhaps Fire Emblem: Radiant Dawn would be the game that finally opened my mind, reconciled me with my nemesis, opened for me the doors to a new realm of gaming. So did it work?

In Fire Emblem: Radiant Dawn, you control the members of the Dawn Brigade, a team of revolutionaries fighting back against unjust occupation forces in their homeland. And these guys are cartoonishly, insanely unjust – you know, the type of guys who run their own soldiers through for incompetence and then retreat to their own private shadow patch to cackle ominously to themselves. The lead character for the Good Guys is the rather pretty magic user Micaiah, also known as “the silver-haired maiden. Some fresh-faced and strapping young upstarts join the party, and your band hits the streets to deal with the invaders, and the occasional ruffian bandit that the occupation party tends to overlook. And you know, the plot doesn’t get too much deeper than that.

The story takes place across four different sections, and each section of the main plot is divided into a series of goals. Your dudes enter a new area, converse blandly with each other about the objective, and then the battlefield’s yours. Their abilities are all pretty standard fare – elemental and healing spells or archery from range, and then there are the sword dudes who have to be in adjacent squares. Happily, you can move and attack on the same turn, but if your opponent is directly adjacent to you, they will counterattack. When hovering over an enemy, you can see right away whether it’s a fair match or not, as an opponent’s basic stats are displayed alongside yours. Additionally, objectives will vary on different battlefields – sometimes you will need to defeat all the foes on the field, and at other times, you need bring down only a key enemy. Some missions require you to move your entire party to a certain exit point intact, and others merely require you to survive for a set number of turns.

To say the plot is derivative and the characters are two-dimensional is an understatement. This is not the kind of game you play for the riveting story experience. Since Radiant Dawn is actually a sequel to a previous GameCube title, I asked a pal who was into the series and learned that the heroes of Radiant Dawn, the Daein people, were actually the bad guys in the previous game. Now, their country crushed by the last war, the spirited folks of the Dawn Brigade are standing up to their unfair overlords – which might be an interesting turnabout for fans of the series, but to a newcomer, it feels precisely like every other “young anime revolutionaries take on cruel government master” game you’ve ever played.

Except you’d better not get attached to the characters, because they can die, permanently. You can get a game over if you lose Micaiah or one of the other characters key to a particular mission, but your dutiful troops are as good as dust in the wind. This would be quite an interesting opportunity to philosophically explore our relationships with our player characters, to raise our stakes and intensify the game experience. But at times certain missions are so difficult as to feel like sheer brutality, and losing your new favorite front-line superstar who you’ve been grooming and leveling meticulously for ages in one cheap coup de grace is about as philosophically inspiring as a stick in the eye. You always read those silly blog stories about some idiot who flung his Wii remote at the TV or dashed it against the wall, and you laughed at the need for those snug little Wii remote jackets. That idiot was playing this game, and if you plan to play it, you might want to get a cozy little snuggler for your Wii remote, too.

Look. I write navel-gazing philosophical bull on emotional connection and and character personalization in games all the time. But a super hardcore tactical game, which requires that you make your characters into statistical assets is not the place to try and tug heartstrings on the fragile nature of life and death. It’s nothing short of infuriating here, and once you start viewing your characters as disposable target marionettes, you can’t even be bothered to invest the time in them it would require to create a useful fighting force. There are no lessons on character value to be found here – each section of the game unfolds from a different character’s point of view, and even your disposable folks have established identities. So all it really means is get ready to reset, reset, and reset.

This is, of course, a tactical game, and let me stress again that I hate the genre. And yet I ground and grueled my way through as many painful, throbbing inches of this insanely dull, totally hardcore title that I could stand. Though there are helpful tutorials along the way, this definitely seems like the thick of the tactical RPG genre – I don’t think I’m a dull crayon, but this game seems to me to be punitively difficult, the territory of the stat-obsessed, the battlefield veteran, the experienced and detail-oriented resource manager. I went into it with an open mind and a persistent attitude, and I think it’s safe to conclude that if you’ve never tried a strictly tactical game before, this isn’t one to start with. 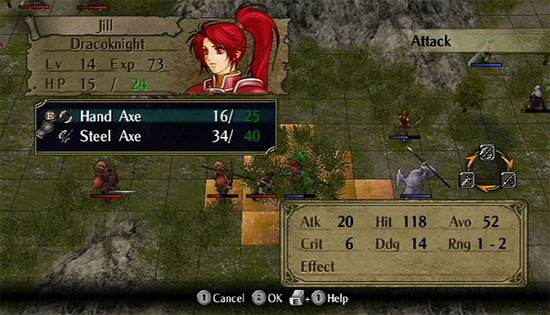 And you might be tempted to pick it up, because it looks RPG-beautiful, with tons of good looking characters with weird hair colors and intense expression, and lots of swirling full-motion cutscenes. In fact, I’d hazard that they’re some of the nicest FMVs I’ve yet seen on the Wii. Almost PlayStation 2 quality. –I kid, I kid. The game is pretty, the music is listenable, and all the girls are hot. If you are into tactical games, all of these elements provide a nice backdrop. If you’re not, don’t let them fool you.

But here’s the thing I don’t get – and this is the reason why even those master strategists who love a hardcore tactical challenge might want to avoid this title. It’s, like… barely even a Wii title. It doesn’t make use of any Wii functionality at all, except for the fact that you can point at menus – and that’s kind of annoying in this context, just pointing away, stabbing at menus all day. It doesn’t use the nunchuk, there are no motion controls, no voice dialogue, and the battlefields themselves seriously look about identical to the Path of Radiance screenshots I looked at. We’re talking about a GameCube title here. Normally one would expect a next-gen sequel to have some next-gen features, but Radiant Dawn has next to none.

All in all, it’s kind of a crummy package, I think – but I’ve the sneaking suspicion fans of the Fire Emblem series, or those who love a real tactical challenge, might adore it. The plot’s weak, the characters blab on too much, and the whole deal’s very last-gen, but for the truly dedicated, it’s playable, I guess. Rent it if you’re a tactical geek — everyone else should forget it.