By far the most difficult thing about writing a review of any Final Fantasy VII related game is in the source material — in associating a new game with that much beloved RPG, we do the new game a disservice in that we see it in a way that makes it extremely difficult to judge it on its own merit. When playing Crisis Core, I frequently found myself a little on edge, and it wasn’t after hours of play that I realized I was waiting to see if any of the interactivity with the FFVII storyline would tarnish the original title’s legacy.

Whether or not Crisis Core does this is up to you to decide, but before you begin to play, I urge you to do your best to separate yourself from your emotions about Final Fantasy VII, whether they be undying adoration, raging hatred or something inbetween. Crisis Core is its own game, and it deserves to be treated as such. Is it a fulfilling experience, though? Hit the jump to find out.

Crisis Core begins with an almost smug bang: Square knows if you bought this game, it’s more than likely that they have you in the palm of their hands from the moment the first note of music begins to play. This isn’t just any game, after all; it’s a side story of Final Fantasy VII, told from the viewpoint of Zack Fair, the up-and-coming SOLDIER who you’ll remember from Cloud’s muddled memories in FFVII. Funny enough, it’s that very element that can account for your love or hate of this game, and as I mentioned earlier, the less you can associate it with your emotions about FFVII, the happier the experience you will likely have with Crisis Core. 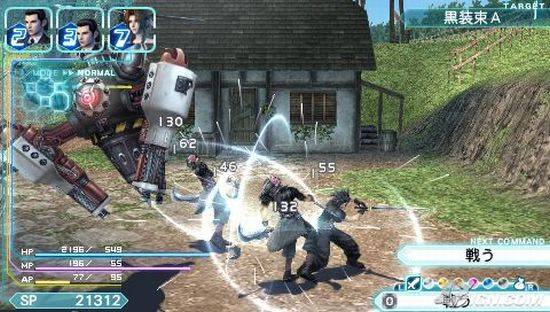 My first resounding impression, above all else I noticed in my first hour of play: Zack is an annoying cockhole. I remembered him as being a little more on the quiet side from his short cutscene in FFVII, but perhaps this is the side of him we never got to see until now. I liked him better after some game events happened and I got to see him go through some things, but be warned that if cocky teenagers annoy you, playing as Zack may be no tea party.

Putting aggro teenage bravado to the side though, Crisis Core will take some adjusting to for the average Final Fantasy fan. Cutscenes and interactions are up to par with Sqaure’s usual standards, but the forward progression of the story is diced up in an entirely different way than an RPG. I’d actually call the game an “adventure RPG”, but with the emphasis on adventure.

Zack’s story actually interacts with the same time period as Last Order: Final Fantasy VII, which I’d urge you to watch if you are at all interested in trying to fit the pieces of all the FFVII stories together. Zack is sent to Wutai to investigate the disappearance of Genesis, a first class member of SOLDIER, along with Sephiroth and a new character, Angeal. The tale begins from there, sketching out a great deal of backstory and showing how Cloud and Zack became friends, Zack meeting Aerith and his eventual discovery into Genesis and Angeal’s origins. 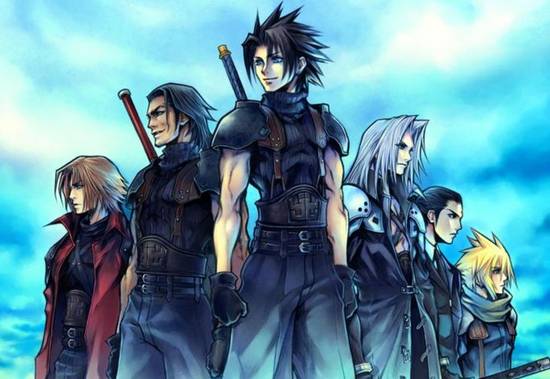 I liked the story quite a bit, but I can’t say the same for the combat. Crisis Core employs real time battles, which I quite enjoyed in Final Fantasy XII and was hoping to see used in the same way here. The actual battle activity is fairly straightforward, using the shoulder buttons for selections and allowing you to move freely with the control pad. That I had no problem with. Power Surges (basically, Limit Breaks) and leveling up are connected to a new battle system called the Digital Mind Wave (DMW.)

There’s nothing I can say here to express my disappointment over the way the DMW works. What you see at the top of the screen looks a bit like a slot machine, with three slots where you see spinning images of the faces of characters you meet in the game, each with a number next to them. The reel spins continously as long as you have SP left in your gauge. When it lines up three characters or point values, you gain access to Power Surges or level up. What’s wrong with that, you say? Here’s the rub: you have ZERO CONTROL of those reels. They level for you, they choose when you get Power Surges, and you have nothing to do with it. What could have provided a great addition within the challenge of a battle is simply a failed opportunity. I was able to get over it and keep playing, but I hated that the simple addition of a button push stood between me and an aspect of battles that could have really been fun to interact with.

Anyway, enough of my DMW rage: Materia are back and are quite useful for Zack, as you can equip them or actually combine them to make stronger Materia. The way the command bar is set up you can equip Materia into it and use it at the push of a button, which is very nice for instant gratification gamers. The opposite spell rule of most traditional RPGs seemed to apply, as attacking machines with Thunder seemed to do more damage than other spells, but there are no specifics about that in the game, so maybe I’m just operating on that age-old “water against fire” mentality. 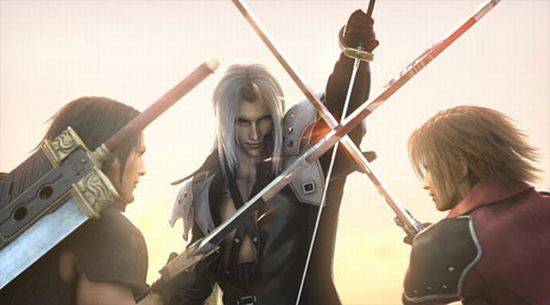 I’m sure you are wondering what familiar faces you will get to see in Crisis Core, and there are quite a few, actually. In addition to Sephiroth and Cloud, you’ll meet nine memorable faces, although I won’t tell you where and when so as not to spoil it for you. What I will tell you is that you will meet seven new characters as well, several of them which definitely left an impression on me. Angeal Hewley, Zack’s mentor, is the richest, but even the supporting characters have a nice feel to them (I found Advent Children’s characters pretty forgettable, so I was pleased to see that these characters didn’t follow suit.)

My only other complaint about the game is the “event” music for battles and whatnot. I have an untainted memory of one of my favorite uses of battle music from Final Fantasy VII, in the fight your party is engaged in right after Aerith’s death. The music was silent and sad, and while I wouldn’t expect all battle music to sound like that, it did impact me as one of the few times I’ve seen battle music used truly creatively. The frantic guitar metal in Crisis Core just leaves me emotionally cold, and even though I understand the need to portray a sense of chaos in these battles, I wish there was a less trite route than the screeching guitar god mode.

So, how does it hold up to Final Fantasy VII? Two words, plain and simple: It doesn’t. Rather than those words being intended negatively though, I mean them quite positively — this game could have been a shadow of FFVII, the way Advent Children pretty much ended up being. Instead, the story arcs are clear and concise, and there are new characters to care about that aren’t just more recycled dudes with permanent pouts and razored haircuts. 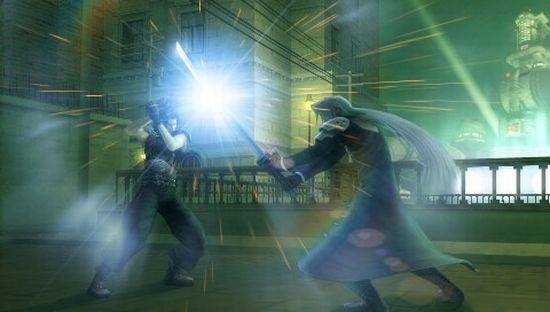 Crisis Core is a truly new adventure, and deserves to be treated as such. As much as it will likely be enjoyed by fans of FFVII, I can also imagine gamers who missed that game playing this could become genuinely curious about going back in time to meet those old characters and learn about how their histories are connected. That’s the best thing a game can do — touch a player so effectively that their curiousity is piqued and leave them craving more. Crisis Core does a masterful job of that, and not even its technical flaws can pull it down.