made its debut on the GameCube in 2004, which I actually remember was the motivating factor in my purchase of that console. The title differed a great deal from the main series in tone as well as gameplay, offering gamers a chance to participate in multiplayer aside from the single player storyline. Four years later, Square has been busy at work on the side series, premiering Ring of Fates on the DS as well working on the upcoming title My Life as a King for the debut of Wiiware.

I had some reservations about this game as I found myself a bit disappointed with the original GameCube offering, but much like a few years can make you forget that the ex you still pine over losing used to forget your birthday, the break from the series had blurred my initial negative impressions enough to make me optimistic enough to be excited about Ring of Fates. Hit the jump to find out why my love affair with Square runs hot and cold, and if this title is worth plopping down your dollar for.

If FFCC: Ring of Fates is anything, it’s unrepentantly adorable. It’s likely this will either strike you as charming or make you want to throw your DS out the window without care for passerby. I wasn’t sure at first, but I found it grew on me as the nuances of the game fleshed out the picture.

The two main protagonists, fraternal twins Yuri and Chelinka, begin the story as young children under the care of their father in a small village. Toshiyuka Itahana’s super deformed character design fondly reminds me a bit of Square’s Tarutaru race from Final Fantasy XI, and everything starts so simply I found myself thinking perhaps the game was aimed at kids rather than adults (although Square has said the Crystal Chronicles series was purposely designed to focus on action, making it easier for non-RPG fans to play.) 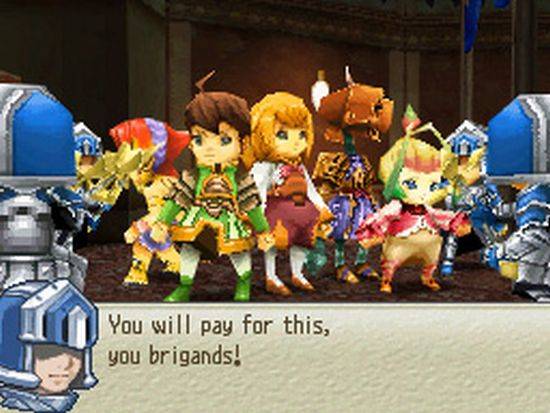 The exploration itself reminds me a bit of The Legend of Zelda series, as you have to physically carry keys around to solve some puzzles, pull switches, etc. This part of the game is fun, but after a few areas were cleared I found I was feeling the repetition — dungeon, puzzles, kill stuff, items, fight boss who has a crystal embedded in a “weak” place on its body…save princess, in another castle, etc. Of course, most games are comprised of repetitive actions, but the key to a great game is making the player forget that and become fully absorbed regardless.

The battle sequences take place in real time, so for those of you that wish turn-based RPGs would die of a wretched plague and never return, this may appeal to you. I like the freshness that this idea potentially brings to the act of grinding, but in Ring of Fates I felt it left a lot to be desired. The most glaring flaw is the implementation of the touch screen, which has you touching it to switch between characters or selecting a magic to use, but is awkwardly non-interactive for such basic actions as moving your character around. You can get past it and enjoy the game, but I would have enjoyed it much more if it was one way or the other when it came to the touch screen.

The turning point of the story was the hook for me; when the children mature into young adults and find their purpose, you’re lead into the real adventure of the game. While it retains the things that make it adorable after this turning point, it finds its resonance as well, which deepens the overall play experience. The dialogue also shines as the story deepens, especially from some of the game’s supporting characters (Al is definitely a personal favorite.) 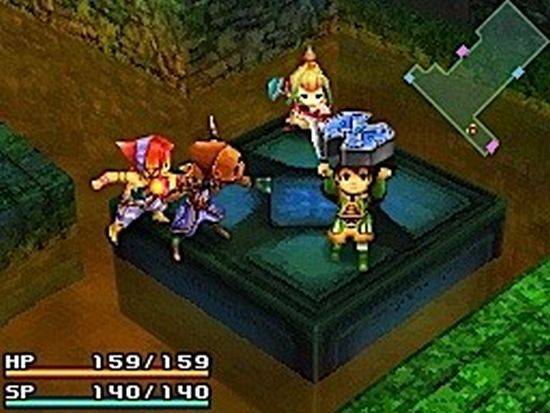 While multiplayer has never appealed to me as a Final Fantasy fan (I guess I’m antisocial when it comes to my RPGs,) Ring of Fates offers it for those of you who enjoy it. You can compete with up to four players (local Wi-Fi only, however) in the game’s caves and dungeons, as well as use the Mog Trader function, which lets you trade moogles back and forth with friends after designing them using the Moogle Paint feature (you can do this in-game when you meet new Moogles.) Moogle Paint is ok, although it seemed to me more like an excuse to use the touch screen for something (other than movement controls which make sense, that is.)

While Ring of Fates has its share of flaws, it still stands as a pretty solid entry into the DS action-RPG category. The music, story and character design stand up to the usual Square standard, which I always enjoy. Since Square has been so crazy about spin-offs these days, I was expecting this title to feel a little hollow, but it actually comes through. Had the oddly unnatural use of the touch screen not been an issue, I think I would have gone from liking to loving it, but in the long run it’s a flaw worth looking past.