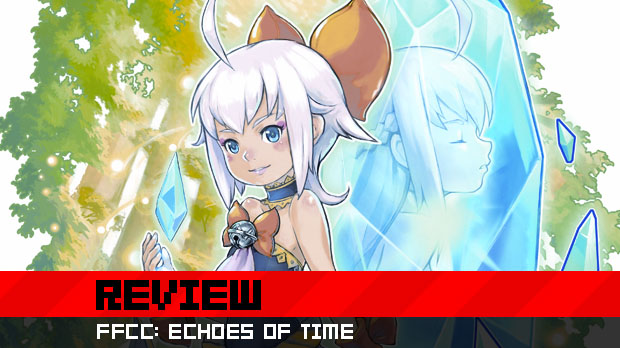 The Crystal Chronicles series of games has never really seemed to catch on, despite having the prestigious Final Fantasy name attached to it. That might have something to do with them rarely being very good. Not exactly terrible, but not great by any stretch of the imagination.

The controls are dodgy, the platforming action messy at best, and the blend of RPG sensibilities with real-time action awkward. Luckily, Echoes of Time has done absolutely nothing to fix those problems, and in fact seems willing to make them worse than ever before.

For what it’s worth, the game’s story revolves around stopping an evil German Librarian who has shattered your village’s Crystal, causing most of your friends to disappear. While he talks of some great incoming tragedy that will strike the planet, you must collect pieces of the shattered crystal and restore order. The story is light and unfortunately lacks characters as memorable as those in Rings of Fate. However, the game is more customizable this time around, allowing you to choose from one of the series’ four races and create your own character.

The title attempts to capitalize on the Monster Hunter craze that is still captivating Japan, putting the focus on four-player multiplayer and quests that can be completed at leisure. You can switch between single-player and multiplayer at any save point, but it’s highly recommended that you don’t bother unless you’re going to play locally. The online mode, at least in the DS version, is utterly pathetic. The platforming action, already hampered by a number of control and camera issues, is made impossible by lag, as characters respond to commands whole seconds after input. While the developers are to be commended for allowing online interaction between the DS and Wii versions of the game, such commendation is meaningless when the interaction simply doesn’t work.

You can choose to create some AI companions, but really … don’t bother. AI has never been in a Crystal Chronicles developer’s vocabulary, and you might as well just go it alone if you can’t get any local players to join you. The main quest is mainly focused on making you play through the same areas multiple times, and coincidentally, so are the rather shallow sub quests.

The worst aspect of Echoes of Time is that it threatens to be enjoyable so often. I have a soft spot for Crystal Chronicles games, and the character customization, equipment leveling, spellcasting and cute artistic style are all present and can often be fun to play with. Unfortunately, for every positive aspect of the game, there is also a negative that severely hampers any fun that could be had. It’s hard to stay mad at some games. It’s impossible to stay forgiving of this one.

Most of the game is spent in its dungeons, short enough to suit a portable game, but long enough to be demoralizing if you die inside them and have to start from the last save point. Simplistic combat and equally simplistic platforming are the meat of the gameplay, but both of them are incredibly flawed, mostly marred by issues that plagued the last game. First of all, platforming with an isometric camera angle is just … stupid. I would use a more eloquent word to describe it, but such an exercise in awful gameplay design deserves no such word. It’s fucking stupid, and it needs to stop. It’s difficult to judge jumps, especially the trajectory of swinging ropes. It’s not fun in the least, and for a game sold in 2009, it’s absolutely appalling that we’re stuck with a mid-nineties camera. The fact that it’s a DS game is no excuse. The fact it’s also a Wii game is just disgusting.

As far as combat goes, it’s just as rough and sloppy as last time. The magic system has been improved, replacing the rubbish Magicite system with a more traditional MP meter, but aside from that, it’s the same lack of targeting and random button mashing as before. Also, please don’t release a portable game with no pause function. Getting trapped in a menu while being beaten to death by an enemy is not my idea of a good time.

I stuck with Echoes of Time as long as I was able to because, like I said, there is fun to be had somewhere. However, the game’s unquestionable commitment to being terrible fights you every step of the way, and each time I started to get into the game, another problem, usually one that Square Enix should have fixed from prior games, rears its ugly head. Messy and chaotic combat, characters not picking up the right objects because is clustered and cluttered, platforming disasters that we’ve not seen since the N64 era. It’s all there for the taking in Echoes of Time, and frankly, it’s not worth your time, or my time, to see through to its grisly conclusion.

As far as the graphics go, this is one of the better representations of 3D graphics you’ll get on the DS. It looks as good as polygons will get on the handheld system, and the designs are are cute and affable as always. Bear in mind that the game looks the same on the Wii as the DS. Yes, it really comes to something when an apparently current-generation home console is sharing graphics with the DS, but there you go. The music is catchy and the sound effects and voices are all pretty good. The presentation is the best part of the game. It’s a shame that the bits that make it a game are absolutely rubbish.

I really want to like Echoes of Time, I truly do. However, you’d need the patience of a saint and the mind of a fish in order to stomach the piles of garbage that cover what could have been a really nice portable adventure. Sequels are supposed to build upon the flaws of the last game while maximing the good points. Somehow, Square managed to reverse that formula, giving us Echoes of Time.

Avoid it. The few glimmers of enjoyable action simply aren’t worth the hassle.