While I am a big fighting game fan, I’ll admit I know much more about the Capcom and Sega fighting titles than I do of SNK’s Fatal Fury series. But what better way to learn than from a disc of some of what are supposed to be some of the best games in the series?

How do these older 2D arcade classic fighters stack up now? Are they worth the price after about a decade? And how is Mai looking these days?

Hit the jump for the impressions of a relative newcomer to the Fatal Fury series.

I’m not a total newb. Here’s what I do know from my interactions with the series’ various titles in arcades over the years: this SNK-developed Neo Geo title let fighters duke it out on two seperate planes, giving it a different strategy from your Street Fighters and such. It has ties to another SNK series, Art of Fighting. The Fatal Fury games have a pretty varied cast of characters, with the most popular being Joe Higashi, the American-looking Terry and Andy Bogard, and the ever-bouncy Mai Shiranui. 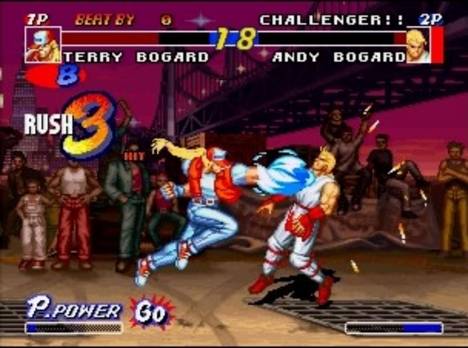 Fatal Fury games are very straightforward as far as gameplay goes. Opponents face each other and fight, via punch, kick, and strong attack buttons. Move sets are similar to those of other fighters like Street Fighter II, though it seems that there is a greater focus on sweeping d-pad/joystick motions for some characters; my play-throughs for some of these characters gave me a half-circle workout!

This action is complimented by some flashy super moves and “hidden abilities,” both of which can be executed after building up a power gauge. There are also “ring outs,” letting you boot an opponent from the playing field after clearing a path for them. Of course, these are in addition to  the previously mentioned multi-plane dynamic, though I didn’t find this to be as useful for dodging as I originally thought.

It has to be said that each of these games are quite difficult, newcomer or not. Seasoned fans tell me that these games even pose a challenge for them, so I didn’t feel as bad as a newcomer. In frustration, I tried to set the difficulty of one of these titles to its easiest setting. Unfortunately, it still took several “quarters” to succeed, and my thumbs were worn raw after the session. I do feel somewhat educated for the experience, and I now feel like I can hold my own playing Joe Higashi in a public setting. I went from having to flip through the manual at first to now feeling pretty comfortable with quick matches. Add another notch to my fighting game belt. 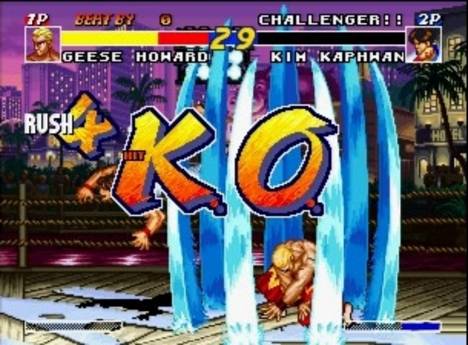 Much unlike Terry Bogard’s fashion sense, all three of these titles have aged rather well. They all look great on the PS2, espeically for mid-1990s arcade fighters. I got a thrill seeing the original “attract modes” for each of these games; Real Bout Fatal Fury Special’s introduction in particular is quite fantastic. The in-game visuals become increasingly better with each title, with Real Bout 2 looking the best of the bunch.

SNK isn’t asking for much for this collection, so don’t expect a lot of bonus content. The hexagon-happy menu looks exactly the same as it does in SNK’s other fighting collections, like the first Battle Archives or World Heroes Collection. But there are a few extra goodies packed in. Aside from the three games, there is also a separate option for a practice mode, which I used extensively to prepare. In Character Setup, you can color your characters in whatever palette you fancy. And, I enjoyed being able to select between the original and arranged versions of each game’s soundtrack.

Newcomer or not, the asking price of less than $20 is a fantastic value for three classic (and formerly expensive) arcade fighting titles. There’s not a lot of variety or extra content here, but these three very solid and deep fighting games alone are well worth the asking price.

Score: 7.0 (Good. Replayable, fun, but nothing innovative or amazing.)