When Bethesda Softworks announced last year that they’d picked up the abandoned Fallout franchise and were hard at work on a “true” next-gen sequel to the game, gamers everywhere perked up.

Fans of the series were excited, but cautiously optimistic. On one hand, ten years was far too long for the main series to remain dormant. And Bethesda has a killer track record, having released a number of award-winning role-playing titles in the Elder Scrolls series, among others. But on the other hand, would Bethesda’s choice to use the skeleton of Oblivion result in a game devoid of the things that made the Fallout series great?

Answers await you after the jump.

The big question on everyone’s minds: “Is Fallout 3 just Oblivion with guns?”

At first glance, the short answer would be “yes”; by using an improved version of the Oblivion engine, there are obvious similarities that you simply can’t overlook, for better or for worse. The way you interact with the world is distinctly Oblivion, like the uncomfortable and off-putting face-front-in-camera conversations you’ll have with the various citizens of Fallout’s post-apocalyptic world, or a somewhat confusing and unwieldy menu system.

But truly, there could be worse things than being compared to Oblivion, a title that was lauded by many as “Game of the Year” for 2006, and praised for its compelling narrative and dizzying array of player choices. Fortunately, all of that translates seamlessly to Fallout 3, making it one of the most engrossing and entertaining gaming experiences of the year.

Simply calling the game an Oblivion clone with a Fallout skin is bit unfair; while Bethesda’s strengths and previous experience as a developer is clear all throughout the title, it’s impressive how they were able to seamlessly integrate some of the series’ trademark gameplay elements into the new title. 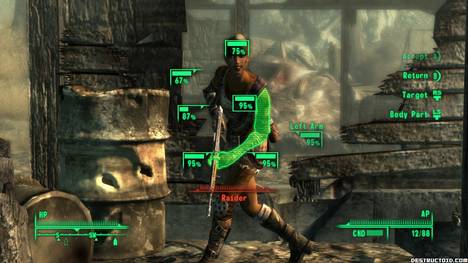 Take the combat, for instance — Fallout 3 can be played from both a first- or third-person perspective, with real-time combat mapped to a single button, much like Oblivion. If you choose to, it’s entirely possible to run through the game like this, playing in a more traditional action game fashion. But that’s certainly not advisable; while movement and aiming is smooth, the game’s role-playing game roots constantly dictate the outcome of combat. Being a head-shot king in Halo won’t necessarily help you here, as an invisible series of back-end calculations (weapon condition, proficiency with your particular weapon, etc.) will determine whether you land the blow and how much damage you’ll inflict.

Enter VATS, the Vault-Tec Assisted Targeting System, a staple of the Fallout series and the way you’ll want to play most of Fallout 3. Pressing a single button will pause the action, and the camera will focus on your nearest enemy target; a quick flick of the control stick will allow you to target other enemies if they’re in your field of vision. By manipulating the control stick, you’re able to target various body parts on a single threat — individual legs, arms, their torso, or their head, for example. Depending on a number of factors, including your position and your proficiency with a weapon, you’re shown a percentage of your chance to land a hit and given an approximation of damage. Pressing a single button will resume the action, and that’s when the fun begins.

Once the action starts, the camera zooms and pans around as the combat begins, giving you a cinematic view of the battle. Despite the fact that you’ve given complete control to the game — you’re simply watching the action play out — the combat feels visceral and terrifyingly brutal. As a baseball bat cracks down on a Rad Roach, the insect explodes like a water balloon, splattering green goo in all directions. A fatal headshot causes a Feral Ghoul’s head to explode like a watermelon, with the in-game camera soaked in gore and blood splashing on nearby objects. A shotgun blast to a running Raider’s leg severs it at the knee, the momentum sending his body flying forward as he drops to the ground, a bloody mess. 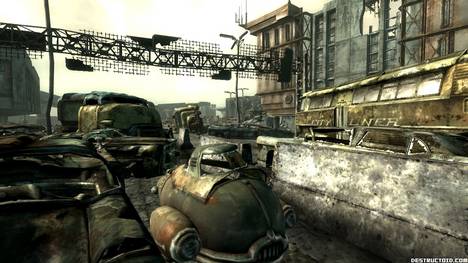 In short, it’s incredibly gruesome and over-the-top, and extremely empowering to the player. Better yet, it really never gets old, which is impressive for a game you could potentially spend more than 50 hours with. But most importantly, VATS brings a level of strategy to the game that you simply couldn’t get in a typical shooter. You’ll have to size up all of your encounters and act accordingly. When head-to-head with an enemy wielding a rocket launcher or about to throw a grenade, perhaps you’ll want to target their arm so that they’ll drop their weapon. If they’re wielding a melee weapon, you’ll want to damage their legs to keep them at a distance, or take a head shot for massive damage at the risk of missing entirely.

While VATS is great and the recommended form of combat in Fallout 3, it’s not always readily available, as each attack uses up something called “action points.” Depending on the level of your character, you’re allotted a certain number of “action points” that slowly regenerate after being used. Once you’re out, you may have to switch to the less accurate third- or first-person shooting, or fall back until your “action points” refill.

And that reveals one problem with the VATS system — there’s no real way to know or determine how many action points a single attack with a certain weapon might use, or at least it’s not readily apparent anywhere in Fallout 3’s myriad of menus. I always found myself simply leaving it up to the game to determine how many attacks I might have left in any given VATS encounter on a case-by-case basis, which put a bit of a damper on some of my combat strategy. It never ruined the experience of combat, but it’s frustrating to be locked out of performing an attack when you’re not exactly sure why, or it comes as a surprise.

Your VATS accuracy — along with the success of just about everything else you’ll do in the game  — is determined by your level, stats, and chosen perks, a system directly lifted from previous Fallout titles. Gone is the hopping across with the fields of Oblivion’s Cyrodiil to upgrade your jump skill, or using a certain type of weapon simply to upgrade your proficiency. Fallout 3 uses a more traditional leveling up system in which points are doled out and placed in the several categories that make up SPECIAL (Strength, Perception, Endurance, Charisma, Intelligence, Agility and Luck). Along with Perks (one special ability or upgrade that can be chosen per level-up, which can be used to further customize your character), this system is classic Fallout, and should be immediately familiar to fans of the series. 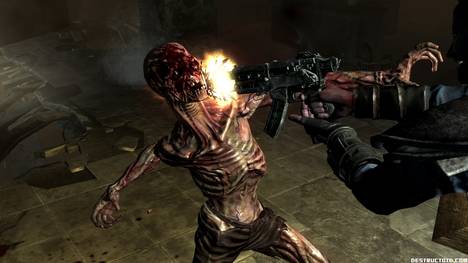 Gameplay aside, Fallout 3’s true strength is in its narrative. Starting as a toddler in Vault 101, an underground facility designed by corporate giant Vault-Tec to help citizens rebuild their lives after a devastating nuclear war, you’ll begin your journey. Progressing up through your teenage years, you quickly find that the often-heard vault dweller mantra “We are born in the vault, we’ll die in the vault” may not be telling the whole story. When your father unexpectedly leaves the Vault (no one leaves the vault!), you venture out to the wasteland for the first time to discover a bleak and unknown world beyond your former home’s steel door.

Bethesda’s vision of the Fallout universe is decidedly less tongue-in-cheek and over-the-top when compared to other games in the series, particularly Fallout 2. That’s not to say it’s without humor, but it’s certainly darker and far more subtle than what many fans might be wanting and even expecting. What it is, however, is well-crafted and intelligent, with mostly-believable characters just trying to find their way through a torn world. From the shunned ghouls of the underworld to a surprisingly articulate Frankenstein’s Monster-esque mutant, there are plenty of memorable character encounters throughout Fallout 3. And because the characters and world feel so real, your actions have a real weight, and the story has many points that elicit true emotion.

I’ll stop here, because just about everything I could possibly say about Fallout 3‘s story would be a spoiler. The true joy in playing Fallout 3 is about discovery, and in the vast post-apocalyptic Washington, D.C.-area world, there’s plenty to see and do. While the “playable area” in the title is decidedly smaller than the massive environment of Oblivion, it’s entirely possible to play the game through to the end of the game’s main story and not actually see all of it. 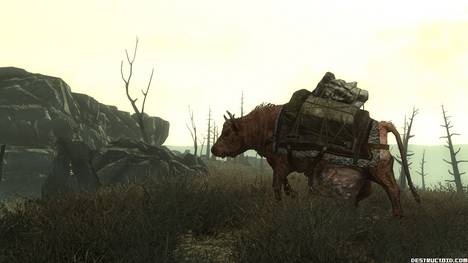 For some, the sheer size of Fallout 3‘s world and the number of options given to you can be overwhelming. Three hours into the game and an hour out of Vault 101, I realized I hadn’t even completed my first quest; instead, I was poking around the world and speaking to its citizens, in awe of its size and depth. While you could simply plow through each main quest point (which I admittedly had to do for the last seven hours of gameplay simply to finish the game for review), there are dozens of side quests, items, characters, and places to discover if you take the time. And because the world is so engaging, you may find yourself lost in the game for hours, quickly forgetting what errand or quest you had set out on.

From beginning to end, you’re always given something to do, and always given a choice to make. These choices will affect your Karma — good, bad, or neutral — and can determine everything from who might want to help you to how the story will conclude. Which brings me to one of the game’s biggest weaknesses — its ending. While the final act is grand and epic in a way that rivals most blockbuster films, the game’s finale was a bit of a letdown. Bethesda promised multiple endings and they certainly delivered, but it’s far too obvious for all the wrong reasons. The ending is a somewhat disappointing patchwork with obvious seams, making it relatively easy to figure out which of your actions resulted in which part of your particular ending. It’s not necessarily bad or game-ruining, but lacks emotion and gravity, and stands in stark contrast to the rest of the narrative. 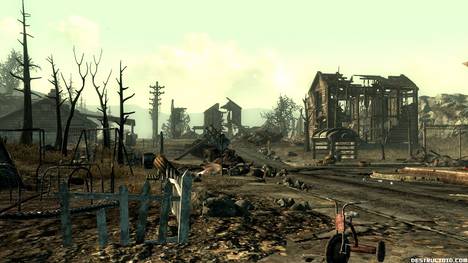 Regardless, the overall experience of Fallout 3 is unmatched, and the amount of game Bethesda has packed into this $60 title can’t be ignored. Flaws aside, taken as a whole, Fallout 3 is an astounding effort and easily one this year’s best gaming experiences. With easily more than 40 hours simply based around a main quest and countless additional hours of exploration and discovery, stepping foot out of your vault onto the ravaged Capital Wasteland is a huge undertaking. But those who take the time to explore it will be rewarded — the bit of radiation sickness is well worth the trip.

Score: 9.0 (9s are a hallmark of excellence. There may be flaws, but they are negligible and won’t cause massive damage to what is a supreme title.)