The first bit of Fallout 3′s DLC became available today. In the unlikely event that you have managed to forget what this installment consists of, this is Operation: Anchorage, in which players have the opportunity to visit a pivotal moment in the history of the Fallout world: the liberation of Anchorage, Alaska from Chinese occupation.

“So, Conrad,” you ask, “How is it? Are there super-cool futuristic weapons? Is the download worth my Microsoft spacebucks/real moniez? Is it true that you have carnal knowledge of my mother?” I have the answers to all of these questions and more.

I’ve done all the real work. You lazy bastards just have to click. 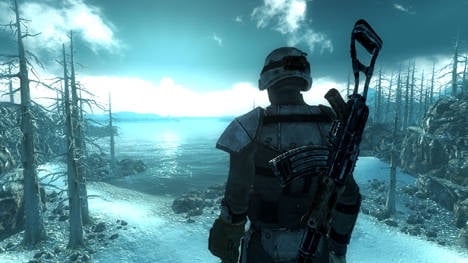 I was curious as to how the team at Bethesda were going to integrate the DLC quest line. The last thing I wanted to do was load up my game and have to wander aimlessly around the wasteland looking for a new location. I did plenty of that in the process of playing through the main game and, though I enjoyed it (twice), I was really not looking forward to doing so again.

Thankfully, the method was so simple that it should have occurred to me from the outset. Shortly after loading up the game, a new radio broadcast becomes available on your Pip-Boy 3000. It’s a distress call from a group of Brotherhood Outcasts who are pinned down by Super Mutants. After traveling to the source of the broadcast and dealing with the menace, you find yourself outside an Outcast outpost. A bit of conversation reveals that you’re just the person they need to help with another problem the group has.

Basically, the Outcast’s outpost is a pre-war military facility and they wish to gain access to its armory in order to salvage the sweet tech inside and hoard it. The only way to open the armory door is by completing a training program in a simulation pod (it’s like the ones found in the main game’s storyline). Unfortunately for them, they lack the necessary equipment to interface with the pod. Good thing you came along, as the Pip-Boy 3000 is just the kind of computer they need to operate the device and you can complete the simulation for them. 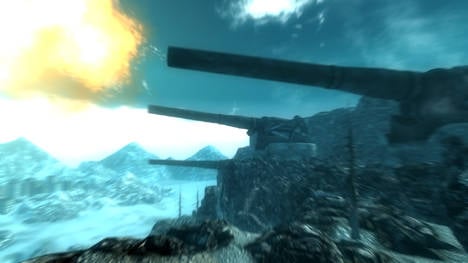 The simulation is broken down into four missions, all pretty linear. The first section begins with you infiltrating a Chinese-controlled artillery battery. Your objective is to destroy the three artillery guns by placing explosive charges at their bases. Of course, you’ll first have to make your way past the Chinese soldiers on patrol. Oh, and you’re only armed with a silenced pistol and a trench knife.

Operation: Anchorage is focused almost entirely on combat. So, right off the bat, if you are not a fan of Fallout 3‘s combat system, you will almost certainly loathe this expansion. If you found the combat to be entertaining but wanted a little more challenge because you’ve reached level twenty and are swatting Super Mutants like flies, on the other hand, you’re in for a treat. 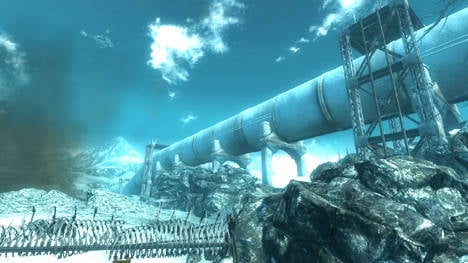 Since the entire series of missions operates within the confines of a simulator, the rules are a bit different. Enemies that are killed blink out of existence shortly after their death animations conclude. This means that there is no scavenging of corpses for ammo and equipment. In addition, there are no stimpaks, limiting opportunities to restore lost health.

This turns the game into a more checkpoint-oriented experience. Along the way, you will find health and ammo dispensers to replenish your supplies. They’re reasonably common, particularly in the first mission, and running out of ammunition for your basic weapons will happen rarely, if at all. Equipment condition is also taken out of the game, as the simulator keeps your weapons and armor in peak condition at all times. 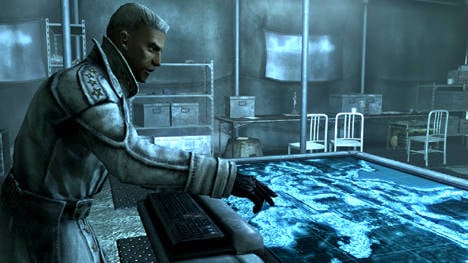 Once you have completed the first mission, you are taken to the Command HQ, where you are briefed on the current status of Operation: Anchorage. Given a field promotion, you get the opportunity to lead a strike team to take out two crucial targets to pave the way for the main force of power armored troops to invade the Chinese stronghold.

This bit is quite cool. You are allowed to form your team using a variety of troop types from basic infantry up to powerful Sentry Bots. You are limited to having three members to your team (in addition to an officer who accompanies you no matter what), and there’s a limit to what types of troops it can consist of. Each troop type has a point value associated with it, and you have a maximum of five points to spend on the composition of your group. So, you have to decide whether you’d rather have that Mister Gutsy drone or a couple of more meaty compatriots by your side.

As interesting as the squad building concept is, their actual effectiveness leaves a bit to be desired. They aren’t very smart, for starters, and will probably wind up dead halfway through a mission. There’s also no way to heal/repair them, and you don’t so much give them orders as tell them to start the mission. Once they’re off and running, the only thing you can tell them to do is return to base, which leaves you with one less target for the Chinese to focus on while you flank them. I don’t mind that Bethesda didn’t want to implement a whole system for squad management, as that would have been difficult and more work than it’s worth, but I would have appreciated it if they hadn’t given the impression that the player is somehow in command of the troops. 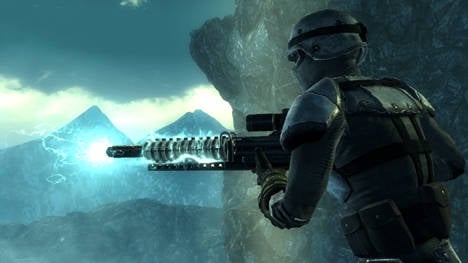 Thankfully, your team isn’t the only thing that can be customized and you aren’t forced to solely rely on them. There are a variety of different sets of equipment you can choose for yourself too. Every grouping of gear you can requisition comes with a close-range weapon as well as something with a little more “oomph.” If you can sweet-talk the Quartermaster, he’ll also supply you with one of the expansion’s exclusive toys, a classic Fallout weapon I greatly missed in this latest installment: the Gauss Rifle. It’s slow as hell to reload, but does more damage than just about every other weapon in the game and will knock nearly any enemy to the ground, allowing for some really fun execution kills while they try to scramble to their feet.

Once you and your team have cleared a path, it’s time for the final assault. This is executed very well, and feels like a chaotic warzone. American soldiers run through the trenches while the Chinese defend from pillboxes and set up ambushes. It’s much more enjoyable than the climax of the main quest in Fallout 3, frankly, as there’s a sense of actual risk instead of simply trodding across the corpses of your fallen enemies. 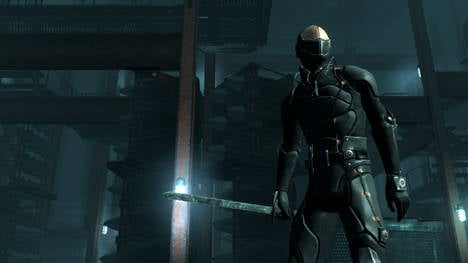 The Chinese are fairly formidable opponents, especially without all of the cool gear you’ve collected in the real world. Their weapons are more powerful than what is carried by your common wasteland Raider, and there’s a good chance that the armor you are supplied with is quite a bit weaker than what you’re used to wearing. It isn’t too much of an issue early on, but things do get a bit hairy as you progress, particularly when you begin encountering their elite forces, the Crimson Dragoons (who wear sweet armor reminiscent of the cyber-ninja from Metal Gear Solid).

There is not a lot of new story content in the expansion, but what’s there is at least entertaining. There are a few holotapes scattered around to listen to, primarily messages recorded by a specific soldier to his girl back home. They help to chronicle the events that took place when the Chinese invaded Alaska and give an emotional level to what would otherwise be mindless killing. I do wish that more effort was spent on explaining the backstory of the conflict, though.

Finally, Bethesda has tossed in the obligatory collection quest. Throughout the DLC’s missions are ten briefcases that contain intel. I would presume that collecting all of them will reward you with something. Unfortunately, I missed one along the way and will have to replay the missions to find out if this is the case. The simulation also appears to be a one-shot deal (it might be possible to go back, but once I finished I could not), so the only recourse for missing a briefcase is to reload an old save and try again. 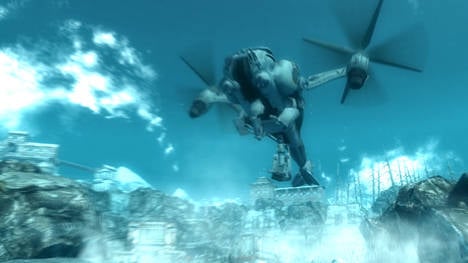 I’m pleased overall with what has been released. The changes in gameplay are refreshing and the challenge level which results from them make it a satisfying experience. It is not painfully difficult, just pleasantly so, and its running time of roughly three hours is long enough to be enjoyable without becoming monotonous. And some of the gear you acquire for having completed it is pretty damn cool too. If you enjoyed Fallout 3, this is a worthwhile investment.