We’ve beaten this horse to death, hired a necromancer to resurrect it and soundly thrashed it again, but I’m going to go grab my equine-smacking stick one more time here and comment on how generally disappointing the fare on the WiiWare service has been. I can count on one hand the number of truly good titles which have been released to date. Thus, it’s a little exciting whenever something with real potential appears on the radar.

Such potential exists in this week’s release of Evasive Space. Described as “space adventure”, Samit seemed impressed with what he saw a few months ago. Now that the game is out, I’ve had a chance to fully put it through its paces and found myself somewhat surprised with what resides there.

Read on for our full review. 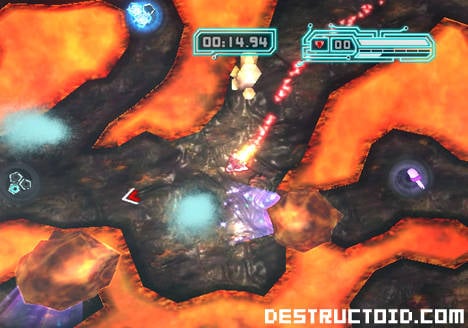 In Evasive Space, you play as Konki, a Space Guardian who is trying to reclaim constellation stones stolen by the sinister Dr. Dark Matter. These are apparently something that power the stars which light up the night sky. The story feels much like it exists only to serve as justification for the game’s twenty levels, as there always seems to be some kind of interruption of the main mission coupled with goofy technobabble explanations for things.

The title is a perfect descriptor of what you do in the game. You’re in space. You evade stuff. That’s pretty much the bare bones of the experience. Colliding with objects, enemy fire and walls will cause a bit of damage to the ship and, more importantly, temporarly shut off your thrusters. This essentially makes you a sitting duck for a couple of seconds while you wait for them to come online and can be fatal. The ship does have a shield which prevents damage from pretty much anything, but at the cost of slowly draining health. 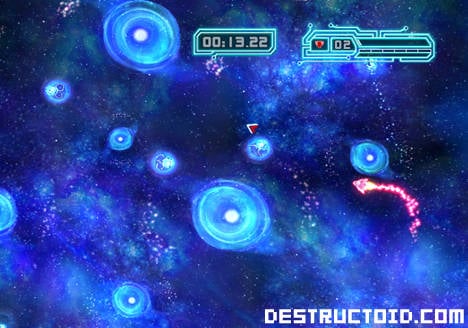 You control Konki’s ship entirely with the pointer on the Wii remote. The cursor indicates which direction the ship is intended to face and holding down the thruster button accelerates it in that direction. It’s a surprisingly agile little craft and the control mechanism allows for making quick turns with excellent precision under normal circumstances.

Environmental conditions, however, often play a role in how the ship controls and it can feel like a very different craft altogether from one level to another. Asteroid belts and planetary rings can play hell with your turning and some objects in space have enough mass to generate a gravitational pull on your ship. This is really fun to play around with in early levels and adds significantly to the challenge level of later ones. 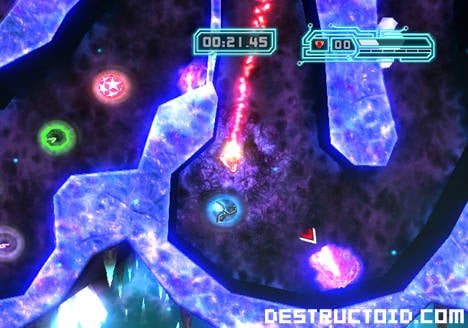 While the main goal of the game is to acquire the constellation stones, levels often switch up the objective. Your time is, more often than not, spent on towing derelict ships back to space stations, rescuing stranded astronauts and returning them to their ships or collecting fuel to replace all the energy you wasted rescuing ships and people.

Levels are broken up into three types. The first are maze-like caverns or ships where you must carefully wend your way through to collect a constellation stone and/or reach the exit portal. These levels almost always have a time limit associated with them and it can be brutally difficult to get in under the wire at times. Other levels are more open fields where you navigate around moving and stationary obstacles. 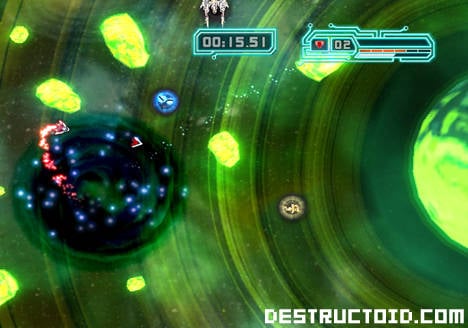 The third type have you orbiting some sort of large mass. These are forced-scrolling areas where the screen rotates and you are required to keep ahead of the turn as going off of the edge results in death. These are some of the most interesting environments but they come at a price: Staring at them for the length of the level can affect your vision and even result in dizzyness, which is a little uncomfortable.

Konki’s ship can gain some improvements to its basic functions as you progress. Going out of your way to collect diodes tucked away in levels will build your upgrade meter and, once filled, you’ll be granted a little more speed or control. The upgrades come in a specific order so there’s no real customization to it. This is too bad, as it’s very possible to finish the game without getting all of the upgrades and it feels like a missed opportunity not to let players decide what it is that they improve. 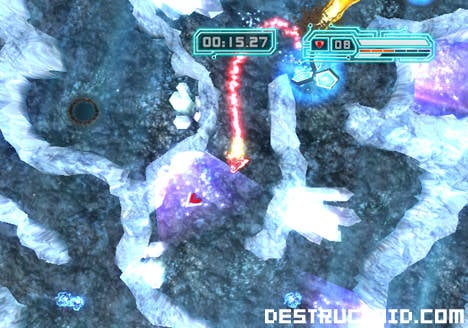 Another gripe comes from the conversations Konki has with her ship’s computer. At the start of every level, the two will have some kind of exchange that requires you to move past multiple prompts. This isn’t bad in and of itself (though it rarely imparts valuable wisdom or interesting plot development), but there’s no way to skip the entire conversation and it pops up every time you start. After about the fifth attempt on a level, this becomes more than a little bit annoying.

These are really minor complaints about a game that looks and feels very polished. It can be exhilerating to speed past obstacles and wend through mazes in this fashion, especially once you get the hang of timing your use of the ship’s shield. The single-player campaign comes with a local leaderboard so you can try to beat your best times on levels if you like. 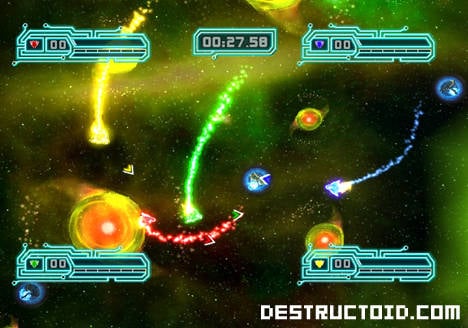 Evasive Space has a local multiplayer mode as well, where up to four players can compete against each other on eight of the game’s levels. These are essentially the rescue and collecting missions from the main game made into a competitive format. It’s a fun toss-in but nothing particularly special.

On the whole, Evasive Space is an interesting title with fun gameplay. It can be frustrating at times but a solid game and a welcome addition to the service.

Score:  8 — Great (8s are impressive efforts with a few noticeable problems holding them back. Won’t astound everyone, but is worth your time and cash.)