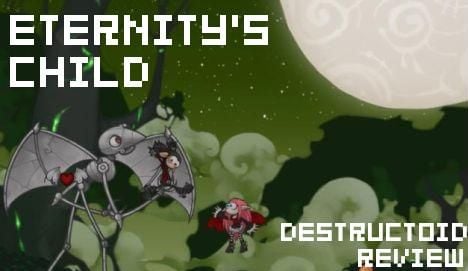 I really, really hate doing header text for reviews, and Eternity’s Child isn’t making my job any easier. Where do you start? Talking about the game’s complex history over many potential platforms? Talk about the game’s creator, Luc Bernard, whose skill at self-promotion has put his work firmly in the public eye for one reason or another? How the game fits in amongst indie gaming in general?

I suppose by writing out which of those things I could use as an intro, I’ve essentially used them all. Thus, I consider my job done as far as writing pre-jump text goes.

All you need to know before hitting the jump is this: the game is Eternity’s Child, and the reviewers are myself and Conrad Zimmerman. And even though Mr. Destructoid is in the game, that doesn’t mean we’re going to go easy on it.

Before we begin, I need to make one thing absolutely clear: I do not enjoy bashing games. I’m not one of those guys who takes great pleasure in coming up with profane puns to mock the title of a game I hate, and I take no glee in ripping something to shreds — especially if that game is created by a very small team of people, working for little to no cash.

Even with that in mind, however, I have to say this: Eternity’s Child is the worst game I’ve played in several years.

Let’s start with the most superficial, and work upward. The graphics, one might think, look great: Bernard’s drawings feel sort of like Tim Burton mixed with someone who isn’t as breathtakingly pretentious or gloomy as Tim Burton, and, in screenshots, the game looks awfully beautiful.

Unfortunately, the graphics only look good in screenshots. In motion, the game looks as good as, if not worse than, most flash games you might find on Newgrounds. The character animations are incredibly stiff: the sprites glide across the screen with the absolute minimum amount of personal animation required to show that they are, in fact, walking and not just magically floating from place to place. 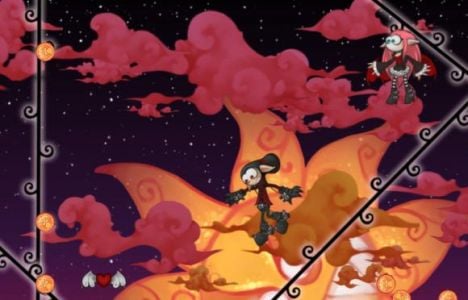 Next, story. There is one, and I’m sure it’s interesting, but it’s delivered in the most boring way possible: through a several-minute-long, text-only prologue which explains, in detail, the characters, the world, the villains, and the plot. It’s a clunky, inefficient, and just plain lazy way of delivering story to the player: why not interweave the story with the gameplay in some way — in any way? Unless you feel like memorizing a bunch of proper nouns and abstract plot points the game throws at you in its first five minutes, then the story of Eternity’s Child will be irrelevant at best, and nonexistent at worst.

But let’s forget the story, and talk about gameplay.

Let’s talk about level design, or the complete lack of it on display in Eternity’s Child. How the player is given essentially no direction as to where to go, but to move randomly eastward, hoping to bump into something of importance while making blind leaps of faith, praying to land on something to show that they’re on the right track.

Let’s talk about how the jump button only responds to your input about a third of  the time, leading you to fall to your doom for no good reason.

Or that the player must kill every single flying enemy they see, because even if they manage to temporarily run away from them — even if they run all the way to the opposite side of the level — the enemies will eternally chase them, so that five minutes after escaping a horde of Evil Flying Robotic Heart Things, you rest for just a moment and, from out of nowhere, the Evil Flying Robotic Heart Things you’d forgotten about come from offscreen and kill you. The only way to survive any encounter with the enemies in the game is to shoot every last goddamn one you come across, unless you feel like being ambushed after you’ve assumedly gotten out of harm’s way.

Additionally, the jump button only works a third of the time. 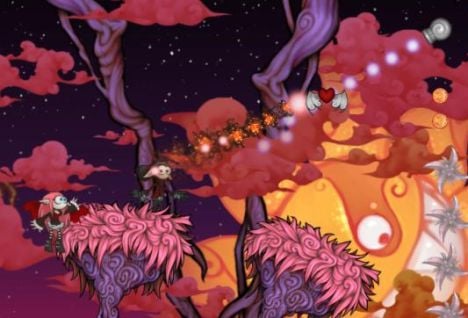 And speaking of combat, the shooting mechanics just don’t feel right. I find it hard to verbalize, but the projectile combat is just poorly paced all around: since your bullets can collide with the bullets of your enemies, and since your enemies fire a lot of bullets, and since the enemies take a lot of damage to kill, and since you can’t dodge these bullets since the jumping mechanics are horrendous, your only recourse is to stand more or less still while firing an unending stream of your own bullets at the enemy, waiting patiently as your bullets slowly knock away each one of the enemy’s dozens of bullets until finally reaching the enemy himself and eventually destroying him after a few shots. You can’t really understand just how underwhelming and slow the combat is until you play the game — something which I would strongly recommend against doing in the first place.

Roughly 66% of the times you hit the jump button, your character won’t do anything.

To summarize: the graphics are bad, the story is irrelevant, the level design is horrendous, the shooting is sloppy and the platforming mechanics are even worse. Yeah, there’s a level editor, but saying the level editor makes the game better is like giving someone a crudely-drawn picture of a penis along with a pencil, and saying the pencil makes the picture itself better because you could hypothetically improve it.

There is nothing good about this game.

We’ve observed Eternity’s Child for a long time now and had an intimate connection with it. Now it’s out and I’m left scratching my head, wondering what went wrong. If you’ve ever had a family member that’s a few years younger than you, someone you’ve watched grow up and care about, only to discover that they’ve become utterly insufferable as an adult, you’ll understand where I’m coming from here.

Luc Bernard’s artwork is beautiful. The backgrounds alone are breathtaking and I could easily lose myself staring at them. The characters and enemies are equally attractive. It all goes wrong once they start to move. Suddenly, they become paper dolls being danced around a kitchen table by an eight year-old. Watching these gorgeous, detailed characters flop around in the environment with stale, rigid and lifeless animation pained my heart. 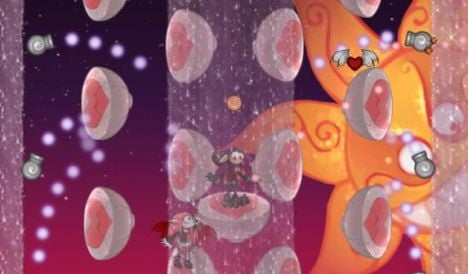 We were warned that the game would be hard and it is. The problem is that it’s difficult for the wrong reasons, most directly in terms of control.

In general, the controls are more loose than a five dollar hooker the morning after shore leave ends. Your character defaults to their running speed and you have to use a separate key to slow him down. If you want to walk to maintain control, you have to keep this key held down, which is really inconvenient when you have to keep one hand on the mouse. Not that it matters much, since you won’t be able to clear most of the jumps without going at top speed and you’ll probably just wind up struggling in a stop-start motion to make sure that you don’t overshoot instead of bothering with it.

Shooting works better, if that says anything. The mouse cursor determines the targeting of your fire while the left and right mouse buttons produce rapid-fire and a charge shot, respectively. The charged shot is interesting because you can catch it with the cursor and then direct it around the screen to kill enemies. It’s a cool idea that utterly fails in execution due to how precisely the cursor must be placed. And, since everything in the environment can collide with your ball and set it off course (and away from your already tenuous grip), trying to use this ability is frustrating at the best of times. 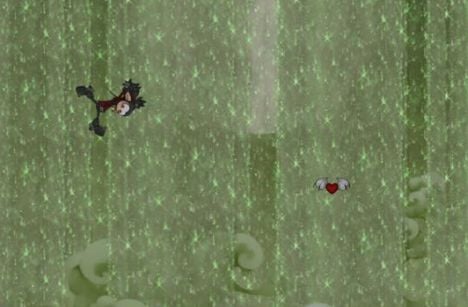 Where stages are concerned, I found them to be surprisingly well-designed. Big and complicated, there are often multiple paths to be taken and you’ll occasionally be forced to do a little problem solving to get past a seemingly impossible distance or grouping of enemies. Unfortunately, other design choices ruin what is an otherwise decent effort. As pretty and detailed as the art elements are, they take up a lot of real estate on the screen. Consequently, it’s impossible to see far enough to determine where many platforms are and you’ll often blindly jump in the hopes that solid ground may appear beneath your feet.

Other technical issues abound. The game crashes on menu screens from time to time. It did not support my joystick (or those of other people I’ve spoken to about it) despite having the option available. Sometimes it just doesn’t want to load the first level. (NOTE: A patch has been released since the time of writing, which may or may not fix these problems.)

When all is said and done, this is a horrible excuse for a commercial release. Nothing could possibly redeem the full product, but there is one positive that I can lend to this review: the soundtrack is excellent. It is too good for this. The best experience you can possibly have with Eternity’s Child is to look at screenshots and listen to the score. And, at around nine and a half minutes, this activity would be enjoyable for a longer period of time.

Whatever you do, don’t buy this game. In fact, don’t even say its name, for that might give its already unholy form power.