It’s fair to say that Koei’s Dynasty Warriors series gets more coverage on Destructoid than possibly any other games media outlet. The fact is, I’m crazy about the games and I don’t care who knows it. The first few games provided an ingenious take on the hack n’ slash genre when they were released, and while Koei hasn’t helped the series endear itself to gamers with numerous sequels, the hardcore fanbase just keeps coming back for more.

The main entries in the franchise (a series which boasts at least thirteen different games and expansions!) are essentially the same — a series of button mashing battles between two opposing forces set in the Three Kingdoms period of ancient China. The battles and characters are loosely based on the era, most notably coming from the Romance of the Three Kingdoms historical novel. A vast majority of gamers don’t see the appeal, while a cult-like collective hungrily snaps up every new iteration, despite the fact that each sequel contains only minor tweaks. What can I say? It’s an addiction.

With Dynasty Warriors 6, Koei’s trusty backbone series makes its current-gen debut, with the promise of having been “reborn.” Boasting a new combat system, fully redesigned characters and a selection of fresh features, Koei is hoping to breathe new life into a game that had admittedly lost its ability to surprise.

Is Dynasty Warriors 6 a true rebirth? Is it as mighty as Lu Bu, or as annoying as Sun Shang Xiang? Hit the jump to find out. 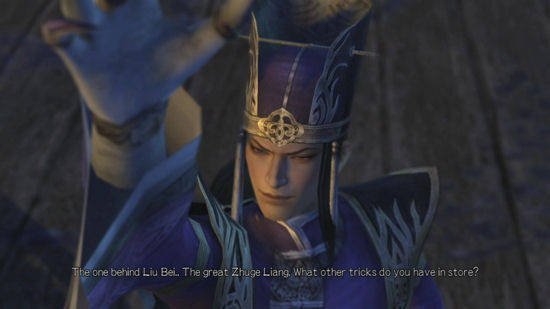 Fundamentally, Dynasty Warriors 6 provides fans with the kind of action they have come to know and love. You pick from a substantial roster of famous medieval generals, then take to the battlefield, helping your forces achieve success by hammering on your controller until everything is dead. You can slay potentially thousands of enemies on certain stages, as you cut down endless ineffective peons and take out their more dangerous leaders. This has remained unchanged in DW6, and hack n’ slash fans will be well served.

Dynasty Warriors 6, however, takes the battles to an all time high. Using the increased power of current-gen consoles, the sixth official sequel puts more soldiers onto the field than ever before. Where the PlayStation 2 put tens of characters onscreen, expect to see tens of tens of tens appear this time. More than ever before does the game truly capture the feeling of being part of a large scale battle, and when things are going well and you’re marching on the enemy main camp with a ridiculously huge force of allies surrounding you, the fight feels more exhilirating than it ever has. The only problem with this is there are sometimes so many models filling the screen you can’t even see what you’re doing. 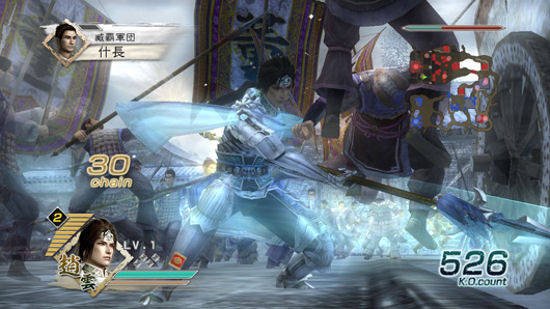 In addition, the battlefield is far more lively this time around. There is so much more going on during a stage and even the common soldiers feel like they have a bit more personality. Slaying enemy generals will be rewarded with nearby allies punching the air and cheering in triumph, and as you lay siege to a castle, you’ll see engineers frantically building catapults and battering rams, while others make a dash for the walls carrying ladders. The environment is incredibly busy and feels very energetic, which is a huge improvement over a franchise that was starting to feel a bit lifeless. The only real issues with the battles themselves are some of the awfully designed maps that they take place on. A fair number of them are needlessly complex and restricted, full of dead ends and meaningless winding paths that chew up way too much time and frustrate no end, especially when you need to be somewhere in a hurry.

The biggest change that DW6 brings about is the new “Renbu” system which certainly keeps the pace more frantic. As you attack enemies, you slowly build up a meter in the bottom left hand side of the screen. When you fill the meter, you gain more attacks that add to your combo string. You can fill the meter three times (after unlocking further refills when you level up), and each time your moveset will increase with ever more impressive attacks. You need to keep up the offense though, as an extended period without attacking, or receiving particularly heavy attacks yourself, will deplete your Renbu meter, and you have to build it back up.

The Renbu system is a very effective way of adding some much needed depth to the combat, as you fight to slowly build up your attacks. Sadly, with large expanses of battlefield to traverse, it’s sometimes hard to keep the Renbu going on certain stages, but the system is generally forgiving with it taking a good while for the meter to deplete and equipment that grants even further Renbu-keeping abilities. The major downside to the new fighting style is that attacking has been even more simplified than before — while in older games you could pull off new attacks with remedial but satisfying button combos, DW6 is more of a button masher than before, with two different combos (a set of normal or strong attacks) being pulled off by hitting the respective button over and over.

While the combat feels a little more stripped, it essentially doesn’t matter for the most part, as battles are so intense this time you barely notice that you’re just smashing your controller with your thumb. The addition of hugely satisfying grapple moves and collectible special attacks also go some way toward providing a bit more involvement for the player. Ultimately, a DW fan will feel put off by the new system at first, but should warm to it greatly after a couple of stages. 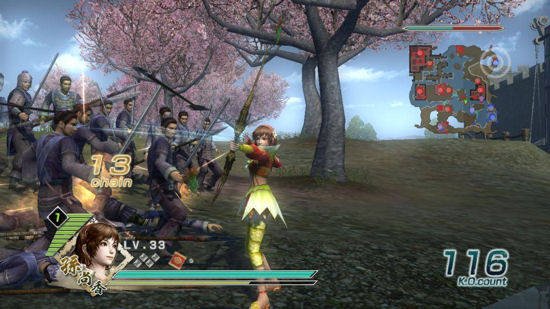 What is less forgivable, however, is the way the game feels stripped down in other areas. For a start, a number of characters have been removed from this title without explanation. Old favorites like Jiang Wei are gone, while characters that were only introduced in the last game, like Pang De, have also been thrown out. One of the most appealing aspects of new DW sequels is seeing what new roster additions there are, so it’s somewhat upsetting to see a reduction instead of an addition. This is compounded further by the fact that a good few characters are clones of each other, with the same moveset. Seeing characters like Zhang He, who had very unique movesets in prequels, be given a generic weapon and a cloned set of attacks, is also cause for sorrow.

Adding in the fact that the story-driven Musou mode is only available for some of the characters, the lack of ultimate weapons or items to unlock, and the complete absence of online functionality, one can’t help but feel the game isn’t being all it can be. There’s a co-op mode, but you can’t take it to Xbox Live or the PlayStation Network, and that’s a huge missed opportunity. I usually don’t comment on a game not having online features, but Dynasty Warriors is a franchise that screams for it, and it’s a shame that there’s nothing to cater for the online gamer — a fact that is doubtless going to cost it a few potential sales. 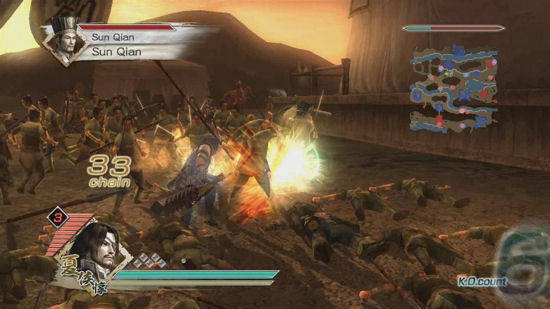 Although the game is lacking in a good few areas, it still provides a largely satisfying experience. In addition to your main goal, each stage now has three different targets, special deeds for you to accomplish on the battlefield that yield experience points and weaponry, as well as new characters if the proper requirements are met. The RPG-lite elements also return, with a more involving Skill Tree this time around that lets you pick and choose from branching paths of power ups which add to your stats or confer unique abilities, as well further Renbu stages.

The game is a visual step up from prior games, although as ever, compromises have to be made for the sheer amount of characters onscreen. Famous generals look fantastic, with a typically flamboyant artistic design that is a Koei trademark, but the rank-and-file soldiery is generic and lacking in any kind of variety. Sadly, however, excessive slowdown is also apparent at times. While it’s not game-breaking, when there are a huge amount of models on the screen, the game will unfortunately struggle to keep the framerate up. Slightly understandable of course, given the huge armies, but it still warrants mention.

The voice acting is yet again slightly spotty, although nowhere near the level of terrible that people claim. A fair few of the voices are actually very good (Josh Keaton is a series regular, for example), and whomever plays Zhang He this time around totally got it right, making him almost as deliciously camp as he was in Dynasty Warriors 3. The ridiculous guitar riffs that make up the soundtrack are also out in full force, and still totally rock in my opinion. 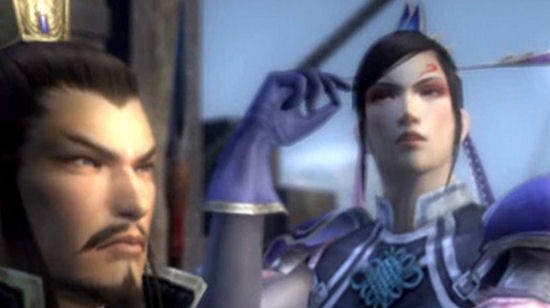 Ultimately, Dynasty Warriors 6 tries some brave new things, fails in certain aspects, but still manages to provide the same button mashing action that won it a hardcore fanbase. Whether it can add to that fanbase with this latest installment remains to be seen, but with a higher level of intensity and a battlefield brimming with life, it’s a good starting point for newcomers. There’s something hugely gratifying about capturing enemy bases, slaying generals and watching the morale of your opponents slowly dwindle which DW6 amplifies to a new level. Is it a rebirth? That’s certainly stretching it, but I can at least tell you it’s a fresh coat of paint on an old dog that’s actually learned a couple of new tricks, but still remains the faithful canine you either love to play with, or keep relegated to the kennel.

If you’re a fan of hack n’ slash, I recommend you go get this flawed but immensely satisfying title. Anyone else, give it a rent sometime, but you probably already know if you like it or not.