Despite the constant grumbling that surrounds remakes, some people are obviously interested enough to keep buying them, proving that someone somewhere is either enjoying the shiny new version or playing it for the very first time. Dragon Quest V is a special case, though, having been originally released in Japan for the Super Famicom in 1992 and also rereleased on the PS2 there, but the US has never had an English language version until now (although fan translations are out there).

Dragon Quest V differs a bit from other RPGs in that it allows you to live out twenty years of your character’s lifetime, including childhood, marriage and family. While the average RPG definitely shows off character evolution, Dragon Quest V seems as if it might offer just a bit more for the fan looking for a deep and rewarding story. Did it come through? Follow me past the jump to find out.

From the first moments of Dragon Quest V, you get the feeling you have a seriously epic adventure on your hands — after all, how many RPGs start with your character’s birth? After a few years pass, you are allowed to name your character and then begin by adventuring with your father, Pankraz. As I mentioned before, the game takes you through this character’s lifetime, but I won’t say anything further about the plot because I don’t want to be responsible for spoiling any part of a good story for any of you (that’s what the internet’s for). 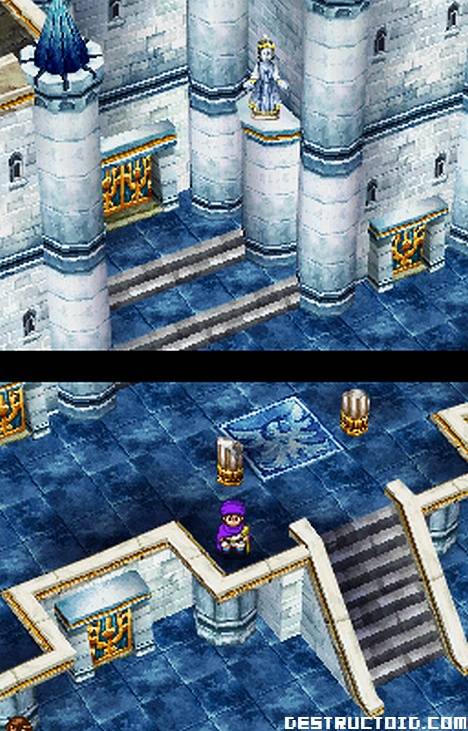 The first thing you are likely to notice about this game is how lovely it looks, even for a DS title. Your world is splayed across both the top and bottom screens, allowing for a more developed sense of the land around you and letting you see where you’re going just a tad better. Being able to use both screens in this way definitely won points with me, as it amplified the feelings of adventure and showed off a world that was easy to sink myself into.

Now, on the field, as you may imagine, there’s grinding to be found, and lots of it. People’s enjoyment of classic-style grinding in RPGs seems to be split pretty evenly as of late, so I’ll warn you: if you hate the grind, stay away. Classic to Dragon Quest history, you will have to spend a lot of time leveling up your characters — probably about 70% of your gaming experience will be spent in random battles. (As an aside, it’s worth mentioning that the battles are complimented by beautiful character art, but you can only ooh and aah at that for so long.)

However, Dragon Quest V differs slightly in that it offers you the ability to capture and train monsters, with a total of 40 available. This adds a bit of spice to the normal grind and allows you to focus on leveling up monsters and using the skills to your advantage in battle. Sometimes certain beasties will ask to join you if your party is strong enough, which is amusing. I personally enjoyed this feature quite a bit and found myself seeking out monsters to capture and level rather than blasting through each area as I usually do. 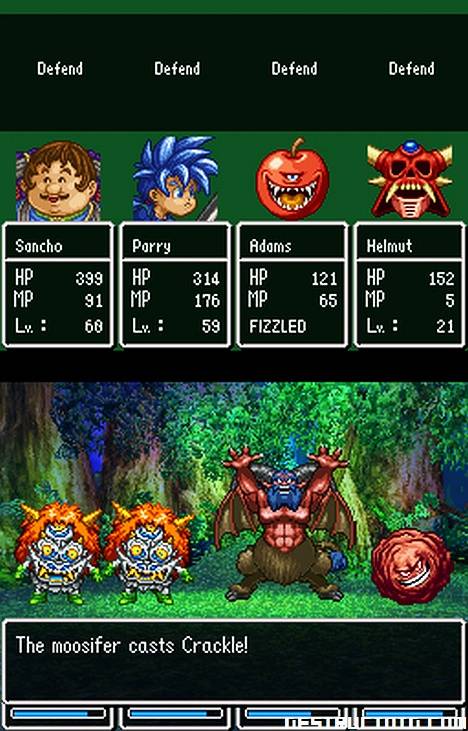 If you get burned out on the grind, you can always pursue one of the game’s collection missions or go relax and play some minigames. The slime-based one is one of my favorites! These don’t really relate to the main story in any way, but it can be fun to go mess with them and make a little extra money every once in a while.

Square made the choice to not add animated cutscenes into Dragon Quest V, which will surely divide fans opinions. Some games that did not possess cutscenes before, such as the PS1 remake of Chrono Trigger, have drawn nothing but criticism from fans (and rightly so), while other titles seem to have benefitted greatly from the addition. Personally, I think they could have been beautiful, but considering I’m choking on cutscenes in the modern RPGs I’m playing, the break from them seemed more refershing than disappointing.

As usual, Koichi Sugiyama takes on the score for Dragon Quest V, and the music is every bit as beautiful as fitting as one would expect from the series. I can’t recommend enough that you play the game wearing headphones, as it takes the immersion to a new level and allows you to easily lose yourself in the game’s world. 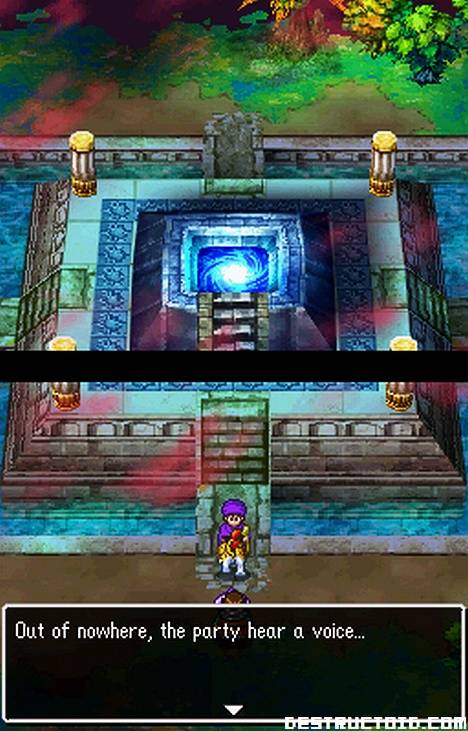 I don’t get the opportunity to use the words frequently enough in RPG reviews, but the only fitting description for the reward of grinding your way through Dragon Quest V‘s story is deep satisfaction. RPGs aim to draw you in with the telling of a story, but they often add padding to be able to claim “sixty hours of gameplay”! While Dragon Quest V offers a solid 25 hours or so, each of those hours is densely packed with real content that engages you emotionally and makes you think and feel as you go. For a portable RPG choice, you honestly can’t do much better unless you’re toting a copy of Chrono Trigger DS around with you (and if you’re a fan, here’s betting that you finished that months ago!)