Donkey Kong Barrel Blast is the latest racer for the Wii. If you’re unfamiliar with the backstory, we’ve been promised the game for quite some time – it was actually supposed to be a GameCube title, using the accompanying bongo peripherals. Instead, it’s been being reworked and picked at all this time, and now it’s finally knuckle-dragged onto the Wii, where instead of playing video game bongos, we can now flail video game remote controls.

It features monkeys flying on rocket-powered bongo drums. Is this awesome? Hit the jump to find out.

Donkey Kong Barrel Blast (Wii)
Developed by Paon
Released on October 8th, 2007
Let me preface this review by making a bold statement: I don’t like racing games in general, and that includes Mario Kart. At first, this was just because I never got into it; now, it’s because I’m sick to death of hearing about Mario-anything. I mean, to be sure, one can expect many a Mario title to crank out on the Wii. But when will the madness end? Mario Shuffleboard?

Mario Blood Drive? Mario Car Wash?  And yeah, you don’t need to tell me there are other things to play on the Wii, like Mario – I mean, Metroid and Zelda. But it’s like, picture this: Samus asks you out on a date. You’re like, “yes,” right? The first five minutes you’re in her presence, it’s just totally rad, and then she’s like, “what do you wanna do?” And you’re like, “why don’t we play a game, baby,” and she’s like, “alright! I brought Mario!” Come on! Don’t be like that, baby. Come back here. I’m still talking to you. Don’t you dare walk away from me, Samus Aran.
–Anyway. Racing game fan or not, Metroid rapist or otherwise, when Linde dragged me out of my wicker cage to review DK Barrel Blast – and here I was thinking I’d get a new ration of zwieback, perhaps a new canister of lye to wash my face with – I was heartily eager, because if I have to look at one more Mario game I’m going to apply a nail gun to my eyes.

I love the old Rare fashion of simian rendering, and it’s been pretty faithfully reproduced here – you’ll even recognize the familiar theme song of one of my old favorites, Donkey Kong Country, in the tutorial screen. At first, you’ve only got Rookie Mode, a few of the Kong family, and a couple of the crocodile Kremlings, to play with, but as you win more races, you’ll unlock more modes and more racers. Unlockables, yes!

Gameplay’s pretty simple; think of how it might have coordinated if you had bongo drums. Rapidly alternate the Wii remote and the Nunchuk up and down – like drumming, duh – to accelerate, and give ‘em a jerk in tandem to jump. Shake either the Wii remote or the Nunchuk by themselves to move right or left. It’s simple, and it’s pretty damn aerobic. As a result of playing this game for only a few days, I am proud to report I have developed swollen, fearsome guns capable of crushing tons of barbed wire and aluminum – unfortunately, Linde renovated my holding pen to compensate, and I am now coming to you from an adamantium chamber in the Earth’s mantle. I have a phone, but Nex is the only person who calls me, so it’s like a new kind of illegal torture.

Oh, right, the game. Okay. It’s pretty fun, actually. You can play in the “Jungle Grand Prix,” which features several different competition cups and one build-your-own, and you unlock additional stuff by coming in first overall in the average score from the three races. You can also do single races or time attacks, and there are, of course, single and two-player modes. The stages have themes like jungle, ocean, volcano and temple – but other than that, there isn’t much variation. You can hop up into blasting barrels (it’s a Barrel Blast! Get it?) for shortcuts, and even pull off style moves by shaking the Wii remote in the indicated direction to get a bigger boost. You might also land a speedy mine cart ride, and you can also hop on top of your familiar animal buddies, like Rambi the rhinoceros, or Enguarde the swordfish, to zoom through obstacles and get a little speed burst. 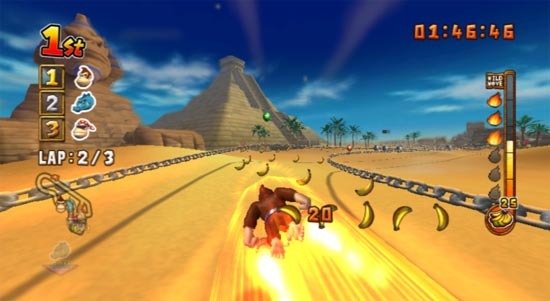 The core of the gameplay, though, revolves around collecting bananas as you go – save up enough and you can pull off a “wild move,” which means you pull back on the Nunchuk’s stick to charge a burst of speed. You can chain the speed bursts by smashing into barrels – though, it’s unclear why smashing into barrels would make one go faster – and you can also knock down your competitors by charging into them, or by hitting A when you’re near them.

Any SUPER WACKY racing game would be incomplete without power ups, and DK Barrel Blast has a few. I must confess, I have yet to really figure out the functionality of them in practice, because it isn’t eminently clear. I think the fairy helps you get bananas, and the tiny monkey enters monkey-on-monkey slavery to steal bananas from the other monkeys. Monkeys! Oh, yeah, and there’s a coconut which makes you invincible, but it looks a lot like a grenade to me. Y’know, stuff like that.

I have been told that DK Barrel Blast is getting what Jim Sterling might call a right proper trouncing in the press, and while I won’t read their reviews until I’m done with mine, I have to hypothesize that it isn’t because the game sucks per se, but because they had expectations carefully nurtured by waiting for this title since the GameCube era. I, on the other hand, was expecting it to be utter garbage, and was pleasantly surprised to have a lot of fun playing it. I might have even more fun if I had someone to play against, but then I’d have to thaw the ice around my heart and splinter my glassy veneer of misanthropy and learn to love again. Pfft.

The levels are not that great; in terms of look, style and course pattern, they get really repetitive – it’s the kind of lack of variety I’d expect from the 16-bit era, and back then it was due to technology limitations. And the controls are a little touchy. They’re simple enough that you can compensate, but sometimes the difference between a quick left-right alternation and a left-right simultaneous smackdown seems a little hard for the game to understand, and you might end up jumping when you mean to accelerate. Not that big a deal, though. And, I confess, the overall experience feels as if it’s just missing something; it’s a little hollow. But, you know, this is a problem I’ve had with Nintendo games in general lately – including DS titles – where they’ve got this great idea, and great technology that has tons of potential, and it just seems they settled for simplicity, didn’t go all the way. You get the idea that DK Barrel Blast  was kinda going somewhere, but didn’t quite make it. 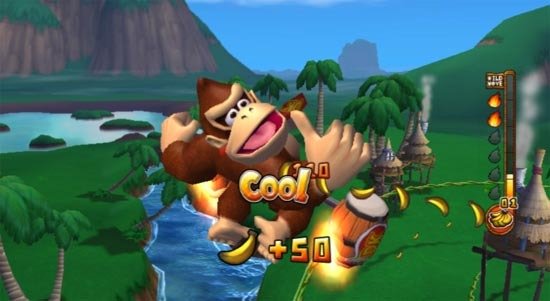 But it doesn’t suck. It ain’t complicated, you’re not gonna cry at the end or cosplay it at some anime convention or cut yourself to the soundtrack (which is kinda insipid, but works) – but it is a lot of fun, and again, probably even better with a friend – and this coming from someone who doesn’t enjoy racing titles, and who hates games that are intended for co-op play (Mario Strikers Charged bores the eff out of me). To be fair, if it is the most fun I’ve had on the Wii for a while, that probably has less to do with the game and more to do with the Wii’s selection – but yeah, I like it, OK? And anyone who hates it probably just sucks at it, and when I get out of here I’m going to play them at it and beat everyone and unlock all the monkeys and be really really proud of myself and then shake the president’s hand and become Queen.

Got nothing to do? Want to max out your pump and shore up your biceps and stare at monkey butts for a while?