So there you are with your friends, hanging out in Shibuya, Tokyo, minding your own business. Your chesty friend Yuzu (nicknamed Yoohoo) was busy being…well, chesty, while your nerdy friend Atsuro was rambling on about computers or something like that. All of a sudden, the sky goes dark, and the entire city of Tokyo is put on lock down by the Special Forces. You and your friends, along with all the other citizens, are trapped within the confines of the Yamanote circle, Tokyo’s inner ring of train tracks.

But this will blow over, right? Maybe not. The military says the lock down has something to do with a gas leak, and they will not let anyone pass. It seems like they’re hiding something. To make matters worse, monsters start appearing out of nowhere and begin killing innocent citizens. Do you stay trapped, waiting to die? Or do you fight back, pushing your way through the military blockade? But wait. You’re just a student. What can you do?

Luckily, through some mysterious modifications by your even more mysterious cousin, your Nintendo DS-ish COMP game and communication system is now able to summon demons, much like the ones already terrorizing Tokyo. Could this be your chance to fight back and survive?

Read on for our review of Shin Megami Tensei: Devil Survivor.

Atlus makes its demon summoning debut on the Nintendo DS with Shin Megami Tensei: Devil Survivor, a clever blend of standard and strategy role-playing games. While it was technically titled Megami Ibrunroku: Devil Survivor when originally released in Japan, this is a Megami Tensei game, and all the familiar features and settings that fans have come to love are in this game as well. This means that Devil Survivor also has a modern day setting where demons become allies. And yes, even Jack Frost is here. Hee-Ho.

At first glance, Devil Survivor looks like a strategy role-playing game, but there’s so much more going on here under the hood. Just like SRPGs, you’ll use tactics to decide where your characters are placed on a grid in relation to enemies, being mindful of their individual abilities and weaknesses. But when battle actually does take place, you’re transported into something that looks more like a standard turn-based role-playing game. Each character (a total of four are available) represent a sort of mini-party, where they and two summoned demons go up against an enemy mini-party. It’s here that you’ll jump back into the Megami Tensei’s familiar world of exploiting character’s elemental weaknesses. Just like in turn-based games, you’ll select a command and watch it execute. Should you take advantage of the enemies’ elemental weaknesses, you’ll be granted a extra turn, giving you the advantage. Another ability, called Skill Crack, lets you take some of a defeated enemies’ power for yourself. With this blend of game play styles, the strategy becomes much more involved than in your standard tactical role-playing title.

Your handheld device, your COMP, is more than just a demon summoning tool. It also serves as a communications device, GPS, contacts list, and much more. Even navigation of the game’s world takes place on your COMP. All of Tokyo is mapped out; all you need to do is select the location to travel there. You’ll set up your teams and plan your pre-battle strategies in your COMP, too. Aside from summoning demons, you’ll also be able to fuse them to create new ones, just like in other Megami Tensei games. This time around, you’ll actually be able to pick skills to be fused to your new demon, letting you make your own custom creation. Finally, demons can also be acquired through a demon auction. You’ll actually put up what you think the demon on the block is worth, going up against two other opponents. If done right, you’ll save a bit of money. If you don’t pay attention, you might end up buying a dud demon. 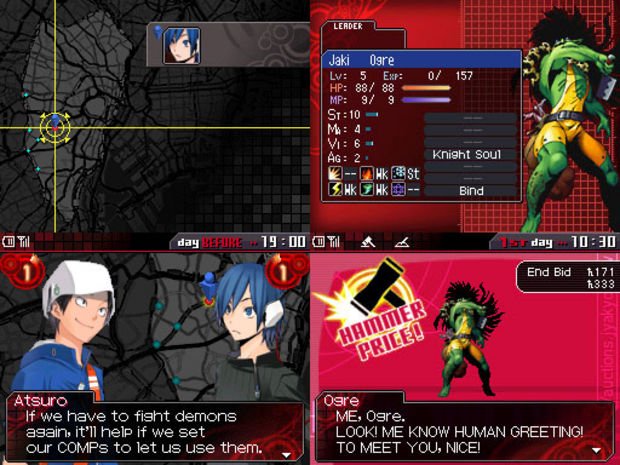 Like many of Atlus’ other related games, time is a key aspect of Devil Survivor. First off, through some strange future-predicting emails, you find out that the world will probably end in about 7 days, so there’s that. These same emails, coming daily from an unknown source, also tell you about deaths that are scheduled to happen. You’ll have to watch the clock to make sure you are in the right place at the right time. If that wasn’t enough, through the power of your COMP device, you’ll actually see a number floating over citizens’ heads, indicating how many days left they have to live.

You are given control of Devil Survivor‘s story with the choices you make. Most of these choices are dialogue-based. In the beginning, it won’t seem like you’re changing much, but as the game progresses, you can take totally different paths depending on your preference (or bravery). With only so much time in the day, you might talk to one character, but miss the chance at talking to another. Between these choices and the nightly email sessions you partake in before bedtime, you’ll have some control over what you do and where you go. Ultimately, you’ll be still be working to save the world.

The game play in Devil Survivor is more about combat and less about character building or relations.  If you consider that the world is close to coming to an end, it makes sense that the cast has no time for small talk. This makes for a leaner, more focused experience than you might expect. There’s still plenty of story elements that slowly unfold, but you’ll spend most of your time in battle or planning out an upcoming battle. 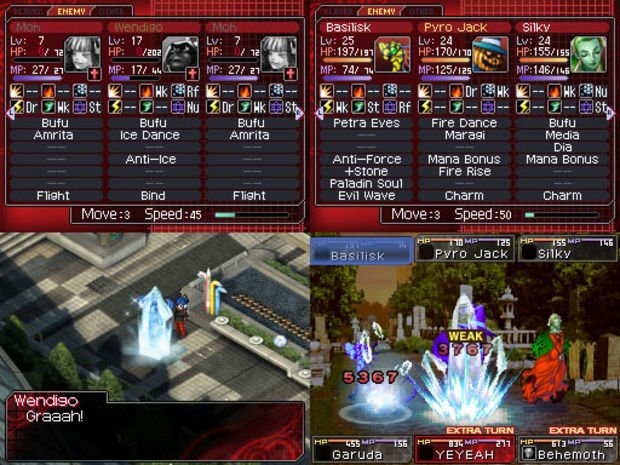 What kind of name is YEYEAH?

The battles in Devil Survivor ramp up from entry level to seriously challenging. It’s the good kind of challenging, mind you. You’ll start out fighting low level demons, but end up taking on mini-gods that will challenge your strategies and in some cases, try your patience. There were a few end-of-the-day main battles that took me 8 or more attempts to beat. While the game does provide some opportunities for griding, in the form of Free Battles, true success will only come in devising the proper strategies, with a focus on exploiting enemy weaknesses. You’ll have to prepare and pair up with the proper demons, as Devil Survivor has no items or weapons as variables. It’s just you and your demons up against other stronger demons. This is a game that requires your thinking cap. While some of the key battles are fairly high in difficulty, devising the right strategy and finally winning is incredibly rewarding.

For their first outing on the DS, Devil Survivor is a great-looking game. You won’t get the lush, animated cutscenes and the full-on voice work of console titles, but you’ll still get a sharp, stylistic experience, as you’d expect from Atlus. The art and character designs are hip, and the backdrops of a crumbling Tokyo are spot on. You won’t have a lot of time to appreciate these works as you’ll be in battle most of the time. The battle presentation is still nice, but it lacks motion to the point that an onlooker would wonder if you were even playing. The music was a nice surprise. It’s 100 percent guitar based, and the pre-battle guitar wails and boss battle power shredding helped to step up the tension. All of the musical selections are top-notch, save for the slightly annoying exploratory music, the one you’ll hear the most of. But good outweighs the bad here.

If you’ve got the strategy chops and don’t mind a bit of a challenge, Shin Megami Tensei: Devil Survivor is a fantastic role-playing experience on the DS. Its time-based, branching story and clever blend of both strategy and turn-based game play styles make for a highly original title.