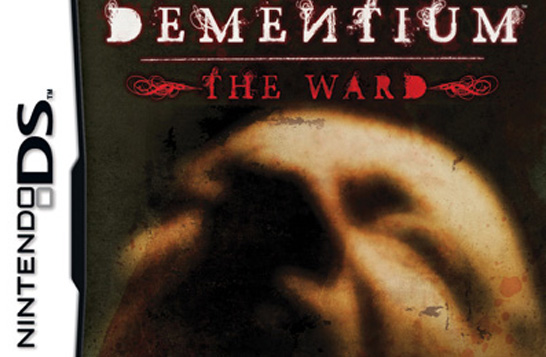 Yesterday was a grand day. I got a little brown box delivered to my door. Looking at the label, I noticed the Gamecock logo and squealed with glee. This could only mean one thing: My much-anticipated copy of Dementium: The Ward had arrived. I quickly wrapped up my work for the day, settled onto my sofa with cat and headphones, turned out the lights and prepared to immerse myself.

Before I begin my review I have to stress something for the readers: Playing this game without headphones is a crime. I played it for a few minutes without just to get a feel for it, and I can say with all surety that this title can only be experienced fully with your ears plugged directly into all the amazing detail of sound within. One of the most effective things a game can do is take you completely out of the world around you. By using sound and music to perfection, Dementium does just that.

So in case you haven’t been scrutinizing every news tidbit about this game as I have, I’ll give you the lowdown. You awaken in a deserted hospital with no recollection of why you are there and very little memory of who you are, and must explore the darkened hallways for clues about what’s happened. Sound familiar? If you’re a horror game junkie, you’ve already fought foul nurses in Silent Hill‘s Brookhaven hospital, so you should be right at home in this setting. As excited as I was to play Dementium, my inner skeptic couldn’t help but put her two cents in: Would a horror FPS work on the DS? Why would I play this over a Silent Hill title? Can the DS handle the graphics?

While Gamecock is distributing this title, it was actually created by Renegade Kid, an indie company formed by industry veterans Gregg Hargrove and Jools Watsham. They’ve been making games for over 14 years, but Dementium is their first independent offering. Cheerleaders of the indie innovators, will you please stand up? This one is for you, and by you I also mean me. (Clears throat and shakes bloody pom poms for emphasis.)

The controls for this game are an absolute pleasure. You use the stylus to look around (FPS point-of-view) and the D-pad to move. Shoulder buttons allow you to flip through weapons (sadly, there are only a few to be had in Dementium) and attack your foes. Character movement is fluid and is considerably more pleasant than the famous “difficult to control” characters of many major survival horror titles before it.  Luckily, you can use the nightstick as a way to defend yourself from the undead without using ammo — there’s lots to be had at first, but as you progress, both it and health become more of a challenge to find.

You might be busy bashing baddies, but regardless the sound and music in Dementium will surely catch your ear. As soon as I plugged in my headphones and got to playing, all my doubts about compelling horror on a portable platform were gently quelled. While the limits of the DS don’t go unnoticed in Dementium, they are easily forgiven in favor of intensely atmospheric sound. Each slither and gutteral gurgle is crisply realized, and the soundtrack has a sense of minimal appeal that really sets the tone, leaving you with a feeling of melancholy disconnection from the real world.

Speaking of enemies, it’s been ages since I had a real reaction to an enemy in a horror game. They tend to be pretty generic, whether it’s a stumbling zombie or a headless beast groping at you. Encountering the maggot-like creatures of Dementium actually made me curl my lips away from my teeth in disgust, and for this horror veteran, that’s a real feat. The sounds they make are terrible, and even mulltiple encounters with them didn’t reduce my revolted reactions. A word of warning: The bosses start hard and get harder. I know that’s the way the structure is supposed to go, but you’ll see what I mean after the first boss wipes the floor with you five times.

One of my few complaints about Dementium is the way the save feature functions. The game’s story is split into chapters, and the game allows you to save at the start of each chapter. The chapters are fairly short, but after completing several tasks and trekking halfway across the hospital only to be murdered by a disembodied flying head, you are forced to start again at the beginning of the chapter. A few deaths later, I was frustrated enough to have to take a break from play until the next day. It would have been nice to save your progress a little more often, although fans of old school titles may actually enjoy the retro taste of the save structure.

Overall the game is a pleasing experience and should delight fans of horror, FPS or quirky indies. There’s nothing like Dementium for the DS out there, and for me personally it’s always a thrill to see the first game of its kind for a portable make a debut. These are the types of titles that we remember years later as benchmarks, and I think Dementium: The Ward surely has a crack at that status. Don’t forget to play it in the dark!