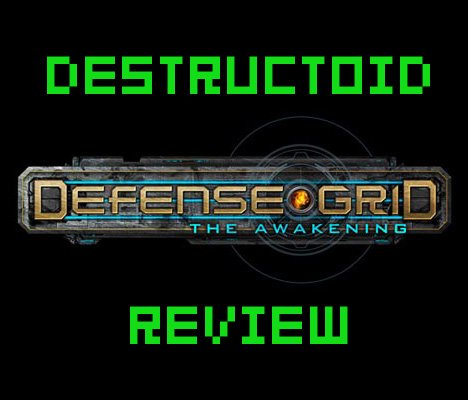 There’s a whole slew of tower defense games available, and most of them are made with Flash and are free to play on the Internet. Personally, I’ve spent a lot of time procrastinating with games like Gemcraft and Desktop Tower Defense, but until now I’d never played a professionally made tower defense game that actually costs money.

Hidden Path Entertainment’s Defense Grid: The Awakening was recently released for PC and will be coming out for XBLA next year, and it attempts to take the standard tower defense game that’s been around forever and make it as pretty and as slick as possible. Does the polish and presentation that comes with a retail game make it worth the purchase, or are you better off playing one of the many free tower defense games available? 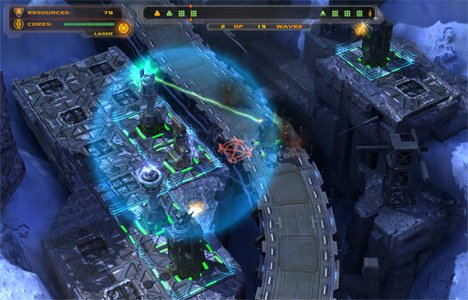 If you’ve played a tower defense game before, you’ll pretty much know what Defense Grid is all about. This game doesn’t aim to turn tower defense on its head — its goal is to provide a quality, polished tower defense game without trying to reinvent the genre. As with most tower defense games, the story in Defense Grid: The Awakening is pretty basic. After 1,000 years of peace, your planet comes under attack by aliens.  The only chance you have of surviving is to reactivate your planet’s defense grid, which has been dormant for the last millennium. As you attempt to re-energize the planet’s defenses, the aliens attempt to steal the power cores that will bring the system back online. If they manage to take all your power cores, it’s game over.

You don’t have to do it alone, though. The defense grid’s AI, voiced by a delightfully dry British man, is there to guide you, dispense advice, and provide you with new towers and weapons with which to crush the oncoming alien hordes. His voice acting is particularly well done, and his comments are sparse enough that he never becomes annoying. 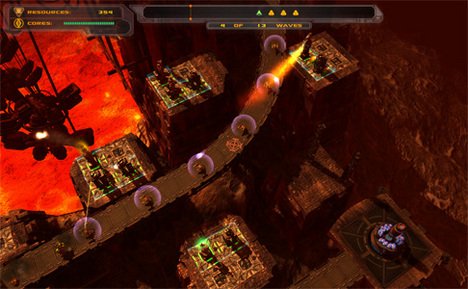 While you start the game with only one tower available for purchase, as you progress through the game, you unlock more towers until you have all ten. All of your towers are invincible and cannot be attacked; the only thing you have to worry about is building the right towers and putting them in the right places. The ten towers you can get are pretty much staples from any other tower defense game: the inferno tower is a close-range flamethrower that will continually damage any enemies that stand in its blast radius and is good for taking out groups of weak enemies, the missile tower is an extremely powerful tower that can only hit air units, the temporal tower slows down the aliens, and so on. Each tower can be upgraded twice, and if you’re strapped for resources, you can also sell them.

The one tower type that truly is unique is the Command Tower — while doing no damage, it reveals any stealthed enemies near it and increases the amount of resources you get when any of your other towers that fall into its control radius kills an alien. Additionally, about halfway through the game, you get access to the orbital laser, which lets you fire a huge laser blast once per match anywhere on the map. Used properly, it can turn the tide of battle, or save your ass if on the last wave, an enemy is just about to leave the map with your last core.

In order to beat Defense Grid, you’ll have to learn what each tower does and strategically place them so that they are the most effective. Unlike some games, you can’t win this one just by placing a ton of towers everywhere — most enemies are weak to one or two specific kinds of towers, and each level has a pretty wide variety of aliens that will come at you. While Defense Grid has the types of enemies you would expect (weak but fast aliens that run in and grab cores, slow lumbering aliens that require ridiculous amounts of damage to kill, fliers, etc.), some of the monsters bring something new to tower defense games. Decoys cloak any aliens around them, making it so you have to have a Command tower nearby not only to kill them, but to kill everything around them as well. Turtles are slow, but killing one breaks open its shell to release other enemies hiding inside. Seekers, if not killed quickly, will open portals that spawn other aliens. These new enemy types add some variety to the game and help keep Defense Grid from feeling too stale. 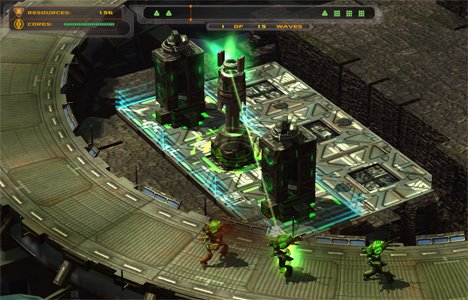 To ensure that players don’t finish all the single-player levels once and then uninstall the game, the developers have added a number of incentives and game modes to keep you playing even after you’ve finished the main campaign mode. Thanks to Microsoft and Xbox Live, achievements are becoming standard on Steam games, and Defense Grid has 57 different ones for you to collect. While some of the achivements are gimmes, a lot of them are quite difficult and will require multiple attempts to collect.

There are also 3 different medals you can earn for each story level, depending on how well you do. While the first medal is granted just for surviving the level, the best medals require you to pretty much play a level perfectly — placing the least amount of towers posssible and spending the least amount of resources, and they will keep perfectionists busy for hours.

Additionally, upon completion of a level, you gain access to a host of new game types for that level. Story Challenge increases the difficulty of a map, 10 Tower Limit pretty obviously only lets you build ten towers, and Green Towers Only prevents you from making any upgrades. While not every mode is available on every level, the eight additional modes give you another reason to go back and revist a level you’ve already beaten. 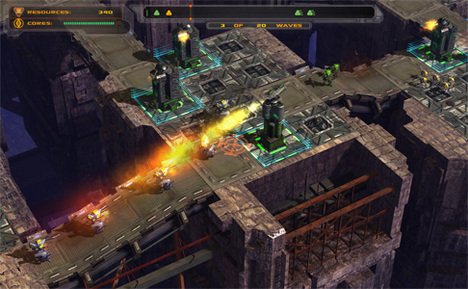 Defense Grid is probably the prettiest and most well-polished tower defense game currently available on the PC. However, at its core, the gameplay itself doesn’t really feel any different from the many Flash-based games I’ve played before. If you’re a huge fan of the genre this certainly isn’t a bad thing, but for a $20 game I suppose I expected just a little bit more.

Even with the multiple play modes, achievements, and medals to earn, it still doesn’t change the fact that there are only 20 levels. Twenty is not a lot, and once you’ve played them all to completion, there’s really nothing else to do. This is a game that would benefit tremendously from a map editor. Hidden Path has said that it’s something they’d like to do, but they’ve stated that their current focus is on getting the 360 version out so it will be a long time before a map editor appears, if it gets released at all. Many people are clamoring for a multiplayer mode as well — a game where one person controls the towers and one person decides which kind of aliens to send out would be great, and would certainly extend the lifespan of the game. Again, multiplayer is something that Hidden Path says they want to do, but can’t promise will ever actually happen.

Even with these flaws, though, there is no denying that the game is fun to play, and it’s extremely well-made. Hidden Path set out to perfect the basic tower defense game, and they’ve come fairly close — the lack of a map editor and multiplayer are really the only major problems with the game (if you can even call them problems). If you’re looking for some big innovation in the genre, if you absolutely don’t care about graphics and polish at all, or if you just don’t like tower defense, then you’re probably better off playing one of the many Flash games available for free. But if you like tower defense games and have $20 to spend, Defense Grid: The Awakening is absolutely worth checking out and will provide you with some solid entertainment — just don’t expect to get 40 hours of playtime out of it.