The first Cooking Mama title spawned everything from Mama cosplay to speculation that Mama was actually in direct cahoots with Beelzebub. While no one has actually been able to unmask her true intentions, Cooking Mama 2: Dinner with Friends may make you forget about them altogether. Not only are there tons of new meals to choose from, but new people to cook for and tons of minigames to keep you in the kitchen.

Now, the question is, do the new features give Cooking Mama 2 the replayability to make it into a game worth buying versus renting? Can this game appeal to anyone over the age of 12? Is it the kind of delightful gaming experience that makes you forget your age entirely? Will Mama eat your windpipe if you ruin a bowl of Kimchee?

Come into my kitchen, if you will.

Even if you adored the first Cooking Mama, you may be skeptical about the release of a sequel (as I was.) As much fun as I had with the first game, I played it through, got gold medals on all my creations, and promptly traded the game in. While I enjoyed it, I didn’t feel it had much replay value. Half the time I was playing it, I would stop to go to the kitchen and make actual food as the game made me hungry.

Cooking Mama 2 takes the formula of the original and improves upon it in spades. The original Cooking With Mama game is intact, where you cook as Mama instructs you. The difference in Cooking Mama 2 is that you receive rewards for the dishes you make, depending on how well you have done so. Success at preparing a dish can earn you anything from presents (food and things for Mama to wear) to unlocking new recipes.

The Let’s Cook option is where the friends come in, allowing you to cook for Mama or for her pals. The game’s art style is at its best here, introducing adorable new characters with the same charm as Mama herself. After you complete a dish, the character tastes your food and gives you a review and a score.  Should it go well, you will often unlock a new recipe and sometimes a new friend. Getting a perfect score here is the equivalent of watching puppies dance to an Erasure song — happiness bordering on paroxyms of joy.

Cooking Contest allows you to either compete solo or use the DS WiFi to challenge friends. This is the key to the game’s replayability and what can make it really fun. The solo version of this is really challenging — it took me some time before I could earn any better than a silver medal on any of these. Two player will set you up on a split screen, which you have to be careful with in order to keep your eye on your own food — it’s easy to get distracted! If any of your friends play, I definitely recommend playing with them as it gives the game a lot of extra sparkle. 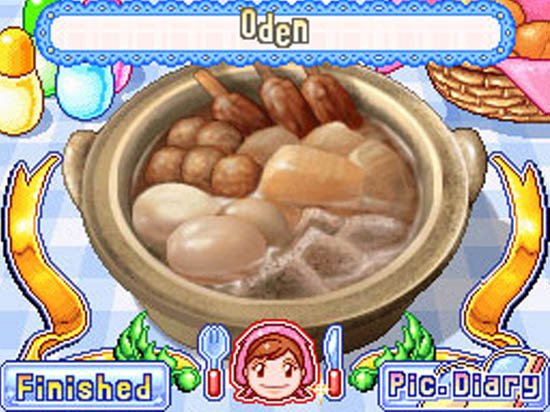 Change Design is a new function I could have lived without, but I’m sure it will appeal to younger players. In this section, you can customize everything from Mama’s outfit to the kitchen itself. I don’t really care if the kitchen has pink countertops, personally. The feature seems slightly weird and unnecessary, as if Animal Crossing made a brief visit to the kitchen, but once again it doesn’t really detract from the overall game as you can ignore it if you wish.

One thing that doesn’t quite make sense is the bonus system. Sometimes you’ll fail at a dish, but you will still get ranked afterwards and get three stars or more, and sometimes a present as well. I’m assuming the reasoning for this is that you did well in several stages of preparation but failed one of them, still garnering some sort of recognition (Mama will sometimes comment “Good effort!”) Its to your advantage so it doesn’t really distract from the game, but I tell you what, I’m not rewarding any chef that brings me a burnt loaf of bread no matter how good a job he did before burning it.

Also, is it just me, or did Mama get a little …. nicer? A little less bipolar? I was definitely less afraid she would stab me while playing this game. Maybe her friends told her she was a bitch. Maybe she’s also that type that acts normal in front of her friends and then takes it all out on her husband in private, whipping his ass with a colander. Poor Papa.

If you’ve never played a Cooking Mama title and are interested in doing so, this is the one to play. If you are already a fan of the series, I would definitely recommend checking it out. Still, as much content was added, it still feels like beneath it all, it’s more or less the same game: High quality, but eventually, you’re going to get over it. I’d say it’s a buy it or rent it title based on your love of the series itself. If friends buy it too, I’d lean more towards recommending you buy it as the WiFi playability gives it a lot of extra happy.