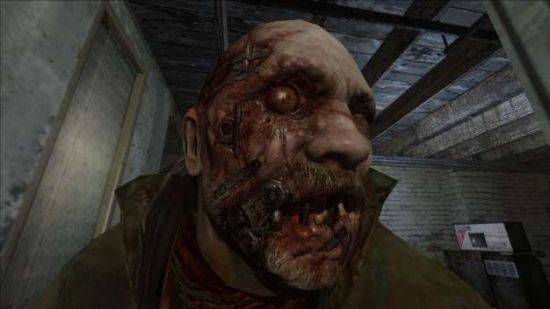 The original Condemned: Criminal Origins wasn’t a masterpiece or anything, but it was good at what it wanted to be: a hobo-pummeling simulator with absurdly good graphics and Greg Grunberg voicing the lead character. With Condemned 2: Bloodshot, Monolith has amped up the hobo-bashing engine, tweaked the graphics, but lost Greg Grunberg.

Can the next entry in the Condemned franchise survive the loss of the man who would be Matt Parkman? Will Ethan Thomas’s adventures ever be the same again, now that they are no longer narrated by the chubby dude from Alias?

Oh, and is the actual game any good?

Condemned 2 is one confused-ass game. It doesn’t realize that people loved the first Condemned not because of the straightforward story, or the cute crime scene bits, or the “scary” atmosphere. People played Condemned for one reason, and one reason alone: to barehandedly dwindle the national hobo population by a few hundred members. Condemned 2 knows that people sort of like this, accounting for its slightly improved fighting system, but the game’s story mode nonetheless does whatever possible to actively prevent the player from doing what he wants to do (e.g., bashing vagrants’ heads in with a lead pipe).

The actual fighting system is a lot tighter and more responsive this time around; instead of the R trigger handling all attacks, the L trigger represents the left hand while the R trigger represents the right. This was an obvious problem with the first Condemned, and it’s the first thing that will jump out to franchise vets. Players can now string together combos for damage multipliers, perform innumerable, violent Manhunt 2-esque environmental executions, and generally engage in a more visceral, entertaining version of the Condemned fighting system than the first game offered.

If only the game wasn’t so preoccupied with making the player walk around abandoned, ridiculously dark corridors for hours on end, maybe I’d have gotten a chance to enjoy it. 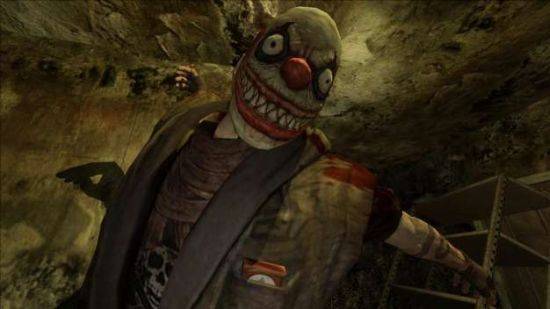 As said earlier, Condemned is about vicious fighting, but Condemned 2 is more about trying (and failing) to scare the player. Every mission includes roughly 70% walking around pitch-black environments, occasionally using a UV light to search for clues or the way out, 25% involves actual combat, and the remaining 5% is comprised of some occasionally fun investigation minigames. Personally, I’d have no problem spending the majority of my time in near-total darkness, if said time was either (A) scary, or (B) even remotely interesting. Condemned 2‘s levels are neither.

Since the player can’t jump, or duck, or do any of the things a person logically should be able to, each pre or post-brawl bit of level exploration essentially boils down to the player turning on a flashlight, right before checking every single door, nook and cranny for a little A-button initiated hot spot.

These hot spots are never highlighted in any significant way (a small pile of lumber might look totally irrelevant, until you spend ten minutes wandering around a room to find an exit only to find that you’re supposed to hit the A button near the wood and step over it), they’re very poorly placed (the game has an infuriating fetish of forcing the player to look behind them or above them in order to progress, rather than, you know, putting hotspots in the goddamn front), and when Ethan does each hot-spotted action by himself without player interruption, it really breaks the flow of the game. Every platform climb or small jump is done as an animation, while the player sits patient and immobile, waiting for his turn to actually play the game. 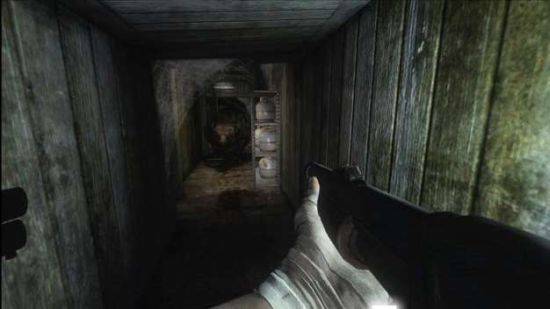 This ridiculous hot spot progression mechanic makes the game feel far more linear and repetitive than it should, considering how much silly fun the first game’s environment’s were. the first Condemned kept the darkened room searching more or less to a minimum, but Bloodshot seems to be convinced that players really, really enjoy fighting with absolutely horrific level design more than they do fighting bad guys. The hotspots fragment each level into an irritating “walk through this darkened corridor, then kill one guy, then walk through three more dark areas as you scratch your head trying to find the goddamn exit, then backtrack to find a switch you need to flip to open a door, then leave, then watch a cut scene, then fight one more guy, then leave the level” sort of rhythm. This causes the game to get repetitive after less than an hour of play.

Later on, the game even forces the player to rely heavily on guns, rather than fisticuffs for several levels at a time. This is not unlike loading up a new Burnout game, only to find that after two hours of playing around with turbocharged cars, you’re supposed to spend a few rounds hang gliding around the courses instead. Condemned 2 is not good with gunplay, and it’s not what people play Condemned for. The fact that such a heavy emphasis is put on use of firearms later in the game makes absolutely no sense.

Bloodshot‘s half-hearted attempt at puzzles don’t make much damn sense, either. Consider one instance in which the player is running around a factory full of sentient, exploding baby dolls. A large jet of flame shoots out on the opposite side of a doll conveyer belt, blocking your path. After about fifteen minutes of dicking around in the factory, I found that in order to progress, I had to turn on a conveyer belt which moved a box with an exploding baby doll inside it in front of the jet flame, using the box as cover so the flames wouldn’t burn me to a crisp. To reiterate, the game goes to great lengths to tell you that these little baby dolls are explosive, and then forces you to put one in front of a white-hot jet of flame. This sort of puzzle-solving “logic” is, if I may be blunt, goddamn stupid. 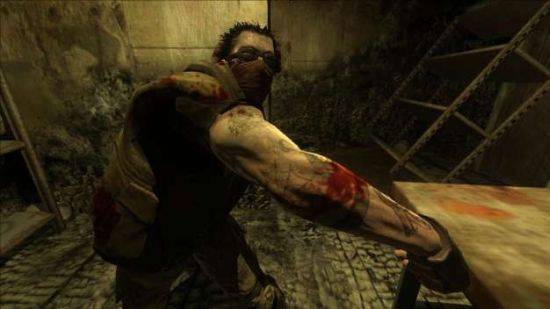 You may have noticed that I haven’t mentioned anything about the story yet. There’s a reason for that: it’s equally stupid. The Ethan Thomas from the first Condemned — a normal, clean shaven cop — has been replaced by a brooding, bearded, “badass” who doesn’t take crap from anyone. The Ethan from the first game was a relative rarity in the pantheon of videogame characters: interesting, but without being cliche or over-the-top. Monolith evidently thought such subtlety had no place in the sequel, and so we’re stuck with a gruff antihero who combines the worst traits of Marcus Fenix, Max Payne, and that douchebag from The Darkness.

Without going too deeply into the plot (not for fear of spoilers, but because it’s really not worth talking about), it moves from not having one at all, to becoming a retread of the first game, until finally settling on an absolutely absurd “global conspiracy wants to end the world” narrative which has been in every single action game since the dawn of time.

It’s not all awful, though. The Fight Club option is a welcome, if brief diversion which cuts through the grease and gets right to the nitty-gritty fighting, the multiplayer is passable if humdrum, and the investigation minigames can actually be quite interesting at times. I have to admit experiencing a moment of CSI-esque glee as I was asked to look at a corpse and determine if the bullet hole in his back was typical of an exit wound or an entry wound, and whether or not he’d been dragged to his current location, and from where. Many of these minigames are dull, flawed, or ridiculous (I dunno how Monolith assumed anyone would be able to pass the detonator investigation on their first try), but the few that really work are damned satisfying.

Overall, Condemned 2 is bad. It’s got one or two fun mechanics, which it absolutely refuses to let the player enjoy for any significant length of time. The story sucks, the level design is even worse,  and the graphics are grimy to the point of being ridiculous. It’s only worth a rent if you absolutely, positively have to see the upgraded fighting system; otherwise, just pass on this lackluster sequel and play the slightly-less-flawed original.