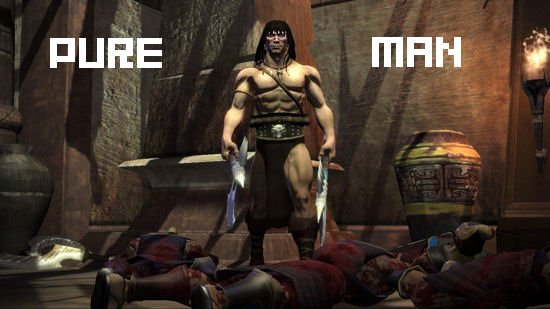 There’s something about the Conan franchise that brings a smile to my face without fail. The sheer testosterone-fueled, immature male fantasy aspect of it all is certainly worth a chuckle. Conan is not a sophisticated man, but then, males generally aren’t. He drinks, he fights, he shags, and that’s about it. Somewhere along the line, a sorcerer or two pops up, Conan beats his head in, then it’s back to wine and women.

Nothing typifies the idea of base male gratification more than THQ’s Conan. There is nothing to this game other than carnage and breasts, and I’m not going to pretend that I don’t find that just a little bit brilliant. Especially in our politically correct age, the idea of what is at best, a completely male-focused, almost chauvinistic videogame being released is just a tad amusing.

But is the game any good? As a fan of brainless action games that require nothing more than hitting buttons until things are dead, I was certainly hoping so, and picked this one up with glee. Our very own Nick Chester did the same, and it is the thoughts of he and I that you shall get to read after the jump. Service us? Aye, and gladly.

When I first played Conan, I was having the time of my life. It had been an age since I last played a pure action game, so this was filling a hole most adequately. Conan rips off limbs, sends blood splashing all over the place, and rescues damsels with their breasts hanging out who say things like “take me and crush me with your love.” It was a joy to behold for all of twenty minutes as I laughed at the shameless dialog, rampant misogyny and unapologetic gore. There was only one big problem with the whole thing.

After ten minutes, the game stopped being very fun to play.

Now don’t get me wrong, Conan is not a terrible game. It’s certainly not a great game, but there are far worse out there. Where it fails, however, is in trying to be superficially difficult through cheap enemies with aggravating attacks and the ability to instantly block all your moves until you level up enough to find the one attack that breaks their defenses. There are elite guards later on that have spiked shields and they are infuriating to face, able to block everything and even damage you with that block if you so much as think about hitting them with a shield-breaking move. What this amounts to is a frustrating amount of time trying to attack these near-untouchable enemies until you find that one Achilles’ Heel, then hitting them with the same attack over and over again.

That’s not very enjoyable when you have a whole arsenal of special moves. Even Dynasty Warriors has variety in the moveset, but I found no fun in rolling to an enemy, doing the same combo and rolling away until it dies — which can often take a needlessly long time. It also doesn’t help that, unlike yourself, enemies can shrug off attacks like they were nothing and complete their own moves unhindered — which makes tackling big enemies like the gorilla monsters a chore. There is nothing amusing about being able to land one or two hits at best then having to dodge another boring, long sequence where a big red monkey waves his arms around like he’s having an epileptic fit.

I have no problem with difficult games. God of War could infuriate me at times, but I stuck it through, and Metal Arms: Glitch in the System is one of my top titles of all time, but if you’re going to be taxing, you have to do it in style and you have to be an awesome enough game to justify making me work. Conan neither handles difficulty well, nor is it worth so much effort. Considering the story is rubbish (Conan must fight a wizard who is evil, also, bewbs), there’s not much incentive to play through boring and cheap faux-difficulty to see what happens next.

There are times where Conan shines. The level-up system is ripped from Onimusha, where you collect runes from fallen enemies to spend on new skills, and the game takes a “not broke, don’t fix” approach. The moves you can unlock are, of course, a joy to behold when you find enemies that actually let you do them. Being able to lop off a bandit’s leg and watch him hop around on one foot for a moment never gets old, it’s just a shame that too many enemies can shrug off your attacks and stop you from pulling them off.

One of the main features of combat is the parry system. Blocking just before an enemy hits allows you to parry their move and turn it into a deadly, insta-kill counter. This is where things really get gory and deliciously ridiculous. Once you block at the right time, you simply follow a randomly selected one-button prompt and Conan will do the rest. Depending on your weapon and the button, you will get to do anything from pulling some poor fool’s guts out to jumping on his chest and stabbing in in the neck before leaping off in a blaze of showboating glory. As with everything in this game however, there are setbacks. Enemy AI is such that there are times when they mostly won’t bother attacking at all if you stand perfectly still. Rather than be a game of timing, you can sometimes stand there like an idiot while they stare at you, possibly admiring your loincloth and turning it into a boring goading/waiting game. Also, as seems to be Conan‘s calling card, the over-the-top nature of these kills gets real old real quick.

At least I can say that a number of Conan’s boss battles are epic, bringing back an old tradition that’s lacking in a lot of modern games. Every now and then, we gamers need some huge, ridiculous monster to test our mettle against and Conan has us covered. From elephant demons to sand dragons, there are some huge foes to decimate, all of them broken down into multiple stages which both adds variety to the fight, and provides in-battle checkpoints to save on the (all too abundant) frustration. While the final boss is one of the most rage-inducing and horrible gaming experiences I’ve had, the majority of boss fights are excellent indeed and you feel real satisfaction when they’ve finally been slain.

Altogether, Conan is not what it could have been, which is terrible considering that it wasn’t even aiming very high. While its heart is in the right place, I grew to loathe the restrictive and cheap combat, grew tired of the gory finishers and hated how I could never finish a combo against most enemies that weren’t the weakest of peons. Even saving the naked women grew tired after about the tenth time I heard some tart squeal “where are my clothes?” My love of repetitive action games is well known, so for me of all people to grow weary of Conan says quite a bit. It put me in mind of Spartan: Total Warrior both in terms of look and frustrating gameplay. I never need to be reminded of Spartan. Ever.

That’s another reason I hate this bloody game.

It’s hard to disagree with Jim when it comes to most of his points. Certainly, Conan lacks the polish and ambition of the games that have clearly influenced its design (God of War, specifically). And yes, eight hours of slashing and hacking limbs off of your enemies might seem a bit on the repetitive side. But here’s where I don’t agree with Jim: The game never really stopped being fun, and like a bad b-movie, was hilariously entertaining from beginning to end.

Perhaps it can be attributed to some long-forgotten childhood trauma, but Conan’s over-the-top methods of dispatching enemies never got old. Whether it was dual wielding swords and quite literally “disarming” an enemy, or tossing a pirate into the air before slicing him in half, I found the combat to be deliciously vicious and rewarding. The ability to pick up and wield a number of different weapons (from two-handed broadswords to smaller axes) opens up a variety in the combat that Jim seems to ignore.

Despite the whining about how the enemy AI being “cheap” and “aggravating,” I had no such issues. Save for the final boss battle, I found Conan to be quite a breeze on its default difficulty setting. Knowing the right set of moves and situations allowed me to pull off most of my attacks with ease; while I’ll admit that I found myself using the same moves time and time again, it was mostly a matter of preference, and not out of necessity. Once you teach Conan how to lop someone’s head off with a shield, it’s hard to not want to do that over and over again. For eight hours. But that’s just me.

Objects in the environment can also be used as weapons, including boulders, and carts. Tossing an enemy onto a spike on a wall is also not out of the question, and throwing a flaming torch at a lion will cause the animal to catch fire. Yes, that’s right — this game features flaming lions, which immediately sets it apart from all of those others games that do not feature flaming lions.

I also found that Conan uses context sensitive action buttons in a few unique ways. Like God of War (and so many titles, it seems, that have followed it), button prompts to perform finishing actions and environmental interactions are all over Conan. The variety of these sequences is worth applause, and some I found were extremely clever. Pushing up large gates, for instance, was more than a matter of simply mashing a button — pulling down on the left stick causes Conan to crouch down, and pulling back up makes him push the door up with force.

Visually, Conan is all over the place, and unfortunately, most of it’s not good. The scope of the game attempts to be epic, and the set pieces are appropriately large and impressive. The action when viewed from afar is also acceptable, but things take a turn for the worse during cut-scenes. Conan and the rest of the cast certainly are some ugly bastards, with little to no discernible details in the face or body. It’s interesting to note that the only character models that do look decent in the game are the naked wenches Conan regularly frees from bondage.

The bottom line is that really, Conan is not a great game. I’d hesitate to say that it’s even a “good” game. But, just like some of the most poorly executed cult films are fun to watch, Conan is a riot to play through, especially while with a group of (possibly intoxicated) friends. Whether or not the game’s developer Nihilistic meant for Conan to be taken seriously is irrelevant. What is relevant is how the player approaches the game. If you’re looking to kill a few hours listening to hilarious and poorly delivered dialogue, or laughing at a brutal, misogynistic barbarian man handle both men and women alike, Conan is certainly worth a look.