Clover is one of those games that would immediately catch the eye of a certain type of gamer — that is, the gamer always on the lookout for something slightly different than the rest of what’s out there. Described as a “plot driven platformer”, this Xbox LIVE Community title places you in the role of Sam, a young man living in a small Medieval village during troubled times.

With a 2D sidescrolling look and very straightforward gameplay, Clover is sure to appeal to retro gamers and turn off the types that are only interested in what’s new and shiny. That’d be a shame for the latter group though, because Clover offers a thoughtful story behind its simple exterior. Hit the jump to find out more.

When Clover begins, you’ll find yourself inside a house with someone rapping at the door yelling at you to come outside. After a brief conversation, you’ll start to get a sense of the current situation. You’re Sam, an orphan who relies on a government-provided allowance to get by. There’s just been a pirate attack on the kingdom, and it’s clear that the political climate is … tense at the moment, to say the least. Try chatting with some of the villagers, and you’ll get a better look into what’s really going on (keep your eye out for the nod to a beloved retro console as you explore!). 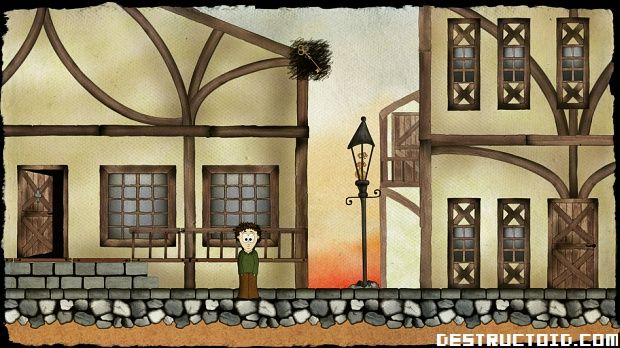 The controls for Clover are extremely simple — you move using the left analog stick and you simply press a button to talk to someone or pick up an item. Your inventory holds three slots, which are visible on screen sbove your head. The heart of the game centers on using items to solve puzzles, but you’ll need to be carrying the right items at the right times to do so.

There’s also no way to die — the worst thing that can happen to you is that you do something to provoke suspicion (such as “pollute” the town water supply by jumping in it), and even if you get caught and thrown in jail, you can merely walk right out and get back to what you’re doing. At other times, you may hear what sounds like a heatbeat and notice the controller thrumming in your hands a bit, which means you’re doing something you shouldn’t be. Too much of this and the guards will take you back to jail as well, but since you don’t have to stay there, it’s a minor inconvenience at best. 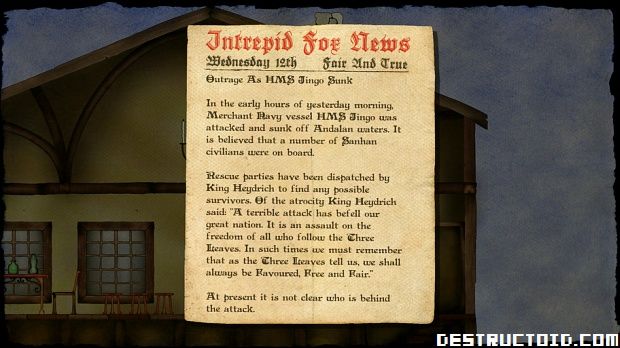 Creator Deejay has said several times that Clover was inspired by the old Codemasters Dizzy games, and while I haven’t played them personally, my impression was more than I was reminded of games like Maniac Mansion and other point and click adventures where you solve puzzles to further a story. One of the only faults I can cite about the game is thatusing the right items can require some trial and error and since your inventory is limite, that may mean some walking back and forth across the map to get something you left somewhere. You can run, but I found myself wishing I had a bigger back so I could save myself the backtracking.

I personally liked the watercolor art style of Clover, but my one complaint with it was the character design. I felt the oversized eyes made the characters too cartoonlike and somehow out of tune with the thoughtful tone of the game. I’ve heard a few Southpark comparisons, which I can’t disagree with. However, the lovely soundtrack does a hell of a job compensating, and after listening to the piano tracks for several hours I found I still wasn’t remotely tired of them. You can also unlock game art by completing the puzzles, which is cool to check out after you complete the story (I did it in a few hours). 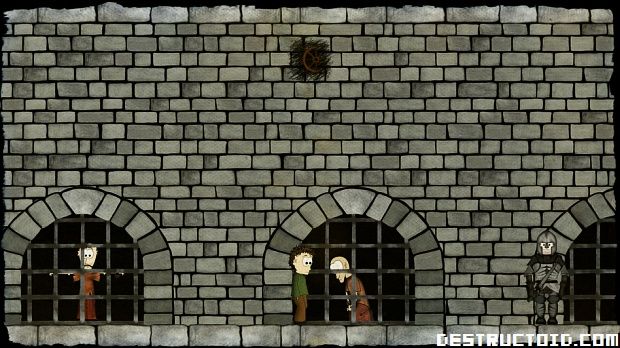 As a whole Clover was a relaxing gaming experience for me, and I enjoyed playing something as unique as it is. If you’re interested in exploring more of what Community Games have to offer, this is one of the best titles out there so far. If you want to see for yourself, you can download the free trial here. Enjoy!