If you’re reading a review of an Atlus game because you’re a fan of any of their other titles, you may have some idea what to expect: beautifully drawn characters, old school fundmentals and often brutal difficulty. While this combo of features may not please every gamer, Atlus tend to shoot for the niche that can’t get enough of it.

That same niche has most likely been looking forward to Class of Heroes for some time now. The PSP title boasts a crisp, pleasant look and dishes up the kind of gameplay any hardcore dungeon crawler fan is looking for: 75 dungeons, over 400 items to find and over 80 hours of gameplay if you choose to explore all it offers. You’ll get your money’s worth, that’s for sure. But will you have fun along the way? Hit the jump for my review.

Long before Class of Heroes had any hope of a US release, it was called Ken to Mahou to Gakuen Mono, which roughly translates to “Those of Swords, Magic and Academies”. Atlus was clever in that they figured that name wouldn’t go over so well, so they decided to go with Class of Heroes, which they felt clearly expressed the RPG/academic elements of the title. By the way, a sequel is already in the works for Japan, so if you love this game and want the sequel, let Atlus and Zerodiv know!

Speaking of academic elements, it’s likely the first impression you will get when you start playing Class of Heroes is that it’s like a cross between Etrian Odyssey and the Harry Potter universe. It’ll likely ring some Mana Khemia bells too, if you are familiar with that series. The game opens in a world where mysterious labyrinths populated by wild beasts have popped up across the land. Naturally, adventurers have explored them and come back with tales and treasure, and like everyone else, you want your chance too.

To get that chance, though, you’ll need to train for the task. This is where Particus Academy comes into the picture. When you first arrive, you’ll have some time to explore the campus and get to know some of the faculty and staff, which is just a really fancy way of saying you’re going to be amazed by the sheer number of menus you are about to encounter. Not that that’s a bad thing, mind you — the hint of obsessive complusive disorder in my blood can’t get enough of that stuff. 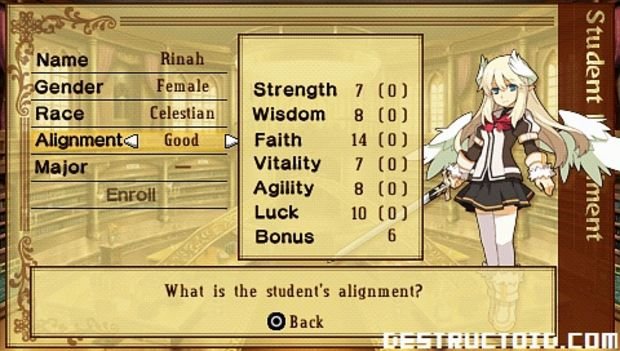 To start off, after a general orientation you’ll need to craft some characters to accompany you on your adventures. You’ll have a handful of premade ones to choose from if you want to get started quickly, or you can choose the “Enroll” feature in the library to create your own from scratch (note: the premade characters start off at level two, which can be a huge help — I advise you use them). If you’ve ever played a dungeon crawler before, you’ll already be familiar with some of these options: choosing race, alignment, and what they call a “major” here, which is basically your job class. These can be changed later in the game too, which makes for some cool depth as far as how you choose to play.

It is worth noting that some races do not get along well with other races, so affinities must be considered. For instance, the Drake, while strong, is the snobby type and may piss off your other party members, and Diablons have demonic origins, so most other races tend to avoid them in general. Unless you read the manual, you aren’t going to be aware of this from the get-go.

After you get your team together, you’ll get a school tour that ought to help you get your bearings. Meeting the staff is where you get to see that spark of personality that seems to dominate the majority of the games Atlus make, publish or both: there’s a tweaked out lab teacher, a drunken Holy Arts instructor that greets you with bottle in hand pretty much all the time, and a girl running the shop who is ready to chew you a new orifice within moments of meeting. It’s going to be a fun ride, folks.

The success of your first trip into the training dungeon, and all trips thereafter for that matter, will depend on careful planning. If you just grab the premade team and march into the training dungeon without carefully arranging their formation, you’re likely to get your ass handed to you. It works like this: your party has a front row and a back row, as do the monster groups you will fight. Obviously, you’ll need heavy hitters in your front row and spellcasters/ranged weapon users in your back row. You can skip the initial lessons offered at Particus if you want to get straight into the dungeons, but you’re a lot better off taking the time to learn how to properly play first (quick hint, though: elemental weaknesses are your friends). No matter what you do, it’s gong to be tough at first though. 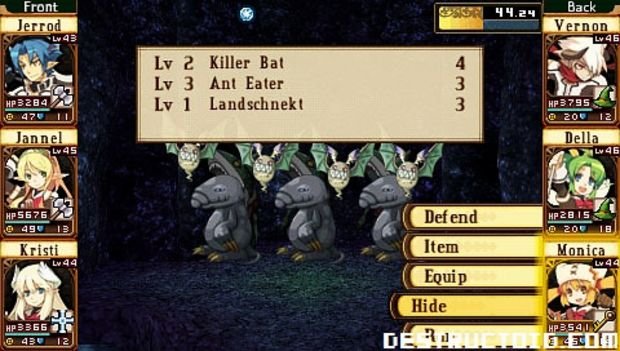 The dungeons are played in first person perspective, and much like the ones in The Dark Spire, they are laden with traps. The first couple of floors of each dungeon you go into are randomized, but as you progress further you’ll find the heart of the dungeon is always the same. You’ll need a map, but you aren’t going to find one in the dungeons themselves. They can either be given to you or purchased at the school shops. Don’t go in without one of these unless you’ve been hand-drawing your own maps with meticulous care for years (and if you are doing that, god bless you, you’re ten times the gamer I will ever be!).

Most of the quests you get are fairly straightforward, such as finding an item or rescuing someone that’s gotten lost. As you progress further into the story, the dungeons’ special floors will become accessible, which are called labyrinths. You’ll find bosses lying in wait down here, as well as a use for those magic keys you’ve been finding on the earlier floors.

Combat itself is turn-based, but the key to success is in the details. For instance, the tension system allows you to charge up special skills that utilize the strength of the whole party. As you complete quests and battles, it will fill up, and eventually you can unleash massive attacks on the foes you face. Also, the game is not focused on how much gold you will collect (because trust me, it won’t be much at first) but alchemy instead — you’ll need put the items you find to clever use. 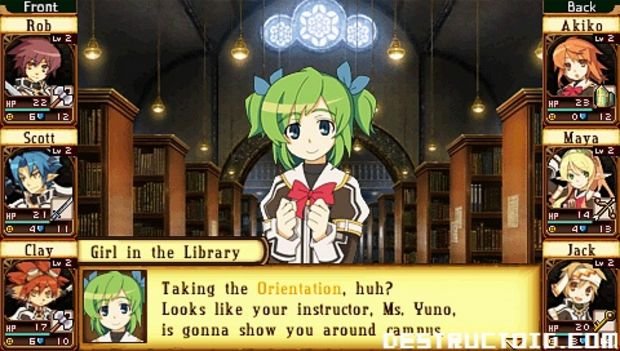 Speaking of alchemy, if you a fan of crafting in your games, you are going to be in heaven. If you have the right items, you can create items and equipment to your heart’s content for very little cost, break your stuff down to the raw materials and sell it or use it to make something else, or even add elemental powers and make your sword or bow ferociously effective against your foes. If alchemy isn’t your thing, I have bad news for you though — you really need it use it to its fullest advantage to make it through this game. if I hadn’t started crafting early on, I would have gotten frustrated enough to hurl my PSP out the window.

As a whole, the music is fairly pleasant, although the Particus academy music does this weird skippy thing where it sounds like it stutters and then starts again. Dungeons are limited to the sounds of the denizens living within and your footsteps, but it never comes off sounding cheap or empty. All your characters have their own personal sounds as well, which you’ll hear plenty of in the heat of battle.

There’s so much depth to be found in Class of Heroes for fans of the dungeon crawling genre, it’s almost overwhelming how much time you can spend playing with the details. On the other hand, the learning curve is much steeper than other games of its kind, and it may turn off gamers who pick it up due to the cute anime look and have no idea what they are getting themselves into. Then again, if you’re going for anything with the word Atlus on the cover thinking you’re going to get off easy, well, you’ll learn fast.