Maintaining a garden is not my idea of a fun time when it comes to video games. Normally, this is a side task in Animal Crossing or Harvest Moon that I give some lip service to in order to focus on the important tasks at hand: catching bees or trying to bang the milkmaid. Chibi Robo: Park Patrol makes this the centerpoint of the game, woefully leaving me without any milkmaids that can relieve my robot urges.

Moving from the original GameCube game Chibi-Robo: Plug Into Adventure, Chibi-Robo: Park Patrol takes it’s chances on the Nintendo DS. The game has you beautifying a park by watering the plants, dancing to make them grow, and fighting pollution. The game’s extremely quirky, and having never owned the original Chibi-Robo for the GameCube, I wasn’t quite sure what I was getting myself into when Aaron decided that I’d be reviewing this game.

I still have no idea why this game is only available at Wal-Mart. If you decide to pick up this game, be sure to have a map ready with you, in case you get lost inside the giant cavern that is a Wal-Mart. Or, if you need to count how many Goron children are in the store. 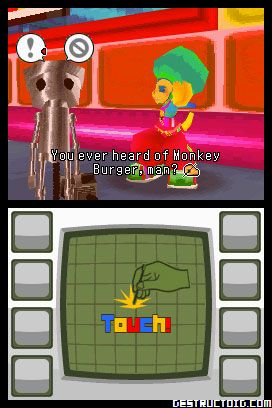 There’s been an epidemic of pollution recently, thanks to all you people driving Hummers. It’s gotten so bad that the local park has turned into a veritable wasteland. So, what are we to do? Summon Captain Planet? If only. Instead, Citrusoft deploys their Chibi-Robo unit to the park in order to clean it up and turn it into something beautiful once again.

Beautification projects certainly are no easy task, especially when the evil smoglings — black balls with legs — decide to try and sabotage all the work that you’ve done. They’ll crap up all of your plants and turn your flowers black, causing them to die at the end of the day. It’s a struggle of epic proportions! Good vs. Evil! Nature vs. Chaos! Environment vs…ok, you get the point. The story is overflowing with cheesiness, what with a big bad cloud of smog trying to sabotage your efforts, and sending his second in command to try and stop you by periodically hurling smoglings in your way.

The park that you are working in is massive: 49 plots of land, and you’re barely as tall as a flower. As Chibi-Robo, you walk around, spraying flower buds with water to try and coax them into growing into blooming. Once they’ve done that, it’s time to break out the beatbox and make those flowers dance like they’ve never danced before. This is how you get them to produce the precious seeds needed to plant more flowers. Once enough flowers are in an area, that plot of land will grow grass, marking your dominance over that area. 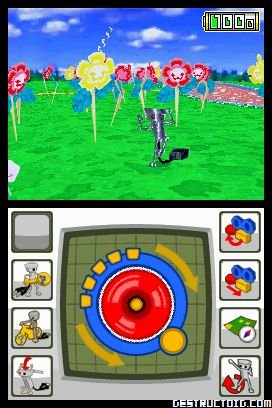 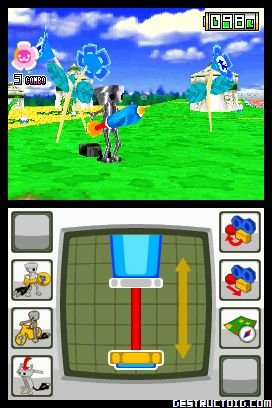 Running around the park and taking care of all of these tasks takes up quite a bit of energy, literally. Chibi-Robo survives on a battery built within him. Once you’ve danced the seeds out of the flowers, the buds will give off some “happy points” as a reward, which will then be converted into watts back at your base. Watts also act as a currency for buying upgrades, such as transportation, tools, or cartridges, which you can use to build, repair, or alter things in the park. There are a variety of toys that you can find within the town section of the game that will aid you in park projects.

The game handles wonderfully. Most everything Chibi-Robo does is controlled by the touch screen, with the D-Pad (or ABXY buttons if you’re left handed) handling movement. All of your items and abilities are hidden within various submenus, making for quick access when in the middle of trying to raise a bunch of flowers and take down a group of smoglings. Each vehicle in your possession handles differently. The car, for example, moves in forward/reverse with the buttons, and then steers with the touch pad. The bicycle steers with the buttons and then moves by rotating on the touch pad. Occassionally, though, there will be stutters when it comes to making the stereo work or some of the driving controls. It’s more of a minor annoyance that pops up only every so often.

This game, though, is by no means difficult. Perhaps in the first hour or two, when you’re getting used to how everything works in the park, and have yet to acquire a bike, there is some inkling of challenge. After that, though, it’s all a cakewalk. If the smoglings come and attack, you can just run them over, and any damage that they cause can easily be rectified within a day’s time. There are some minor points where you’ll stumble, but for the average gamer, this game really isn’t difficult.

That’s not to say this game isn’t fun, though. I haven’t been able to put the damn thing down. When I should have been writing papers, reading books, or going to the bathroom, I instead played Chibi-Robo, and loved most every minute of it. There’s a level of happiness that comes from maintaining the garden, and the fact that you’re consistently making progress in the game creates a feeling of happiness. It’s a difficult to explain, but there’s a line between grinding and childishness that’s fun, and this game rides the line like an ace. I really want to go back to playing this game as soon as I’m done with the review, but I know I have things that I’ve neglected, like sleep. 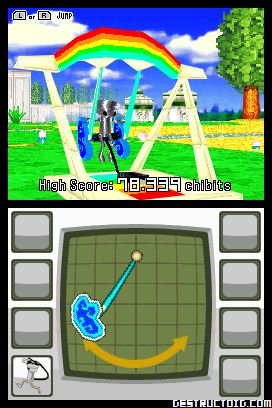 The game has its flaws, though. There’s very little variety in the dialogue, and after 20 minutes or so, you try to avoid even looking at the text boxes. The game will also force you to sit through animations,which get irritating rather quickly. Mostly, you only encounter this at the beginning/end of a day, when you go to refill your energy, drop off gathered items, etc. Listening to the voices chatter on in gibberish can be excruciating — everyone sounds like a Jawa. You can’t just leave the sound off, because a lot of the game depends on audio cues, like the dancing or warning noises for the end of the day or enemy appearances.

The faults of Chibi-Robo: Park Patrol are by no means dire. They certainly prove to be annoyances, and the fact that the game doesn’t provide much difficulty is a knock against the game, but overall, it is a lot of fun. If you were a fan of the original game, then this is most likely going to be an obvious buy. With the tsunami of games flooding shelves, Chibi-Robo: Park Patrol is one that’s good for the whole family.