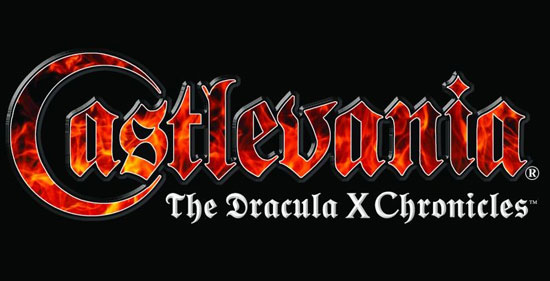 Rondo of Blood was the one Castlevania title that some people on staff (OK, Linde) were creaming their pants over. Now, Konami finally put out Castlevania: The Dracula X Chronicles, which contains a remake of the game Rondo of Blood, as well as the original version of the game, and a re-translated port of Symphony of the Night.

All of that packed onto one little UMD — it’s like Orange Box all over again! How does the game stand up, though? Rondo of Blood was from a different type of Castlevania — the classic platformer as opposed to the more Metroid-esque titles like Symphony of the Night and Aria of Sorrow. Let’s find out!

Castlevania: The Dracula X Chronicles‘s main feature is a 2.5-D remake of the Japan-only game Rondo of Blood. As the hunter Richter Belmont, you’re there to kick some ass, take some names, and eat all the ice cream you find hidden in the walls. The game plays like the old school Castlevania titles — hop over some pits, whip some ill-placed medusa heads, and platform your way to the boss.

Like Castlevania III, Rondo of Blood features branching paths, where you can affect who the final boss is, and thus how the game progresses, by discovering a secondary pathway that’s hidden. Rondo of Blood goes one step further, though, and presents a whole set of alternate stages (2′-5′, specifically) for the player to go through. All in all, though, your end goal is still to kill Dracula. For those of you that don’t know, the final battle in Rondo of Blood is the opening to Symphony of the Night.

When I walked into this game, I didn’t know what to expect — I had only played the more recent, “Metroidvania” style, titles. I was woefully underprepared for an old school style platformer. After struggling through the game the first time, I went back to unlock all the alternate levels and get the few extras that I had missed. This time around, though, I had a blast playing the game. I’ve been used to Castlevania being about searching around the castle, and going back to an old school was a jarring experience.

One of my problems with the game was the poor hit detection from the enemies’ attacks. I would go into a death animation while I was dodging an enemy move, even though I was out of reach. Similarly, I would miss some ledges because the game didn’t register me landing on it properly, so I would just fall back down, unable to proceed. So, it was necessary to switch to Maria, who I preferred over Richter, simply because she can double jump. Playing as her does eliminate some of the challenges in the game, because the double jump allows you some level of control instead of needing to time things exactly right.

Graphically, the remake of the game looks amazing. I’m a recent PSP owner, and I’m still shocked at how beautiful the graphics can be on this system when compared to the DS. The cutscenes look stellar, and the in-game graphics look good. Just like the original Symphony of the Night, the voice acting could have been done a lot better. The voices in Rondo of Blood sound stiff and are delievered poorly.

I know a lot of you are wondering about Symphony of the Night and the retranslation, as well as the new voice work done on it. Well, rest assured that the new work done on it is all good. The voices sound much better and the translation isn’t laughable. That being said, the intro just wasn’t as fun for me without, “What is a man? A miserable pile of secrets.” I guess it’s the nostalgia (even though I played Symphony of the Night two months ago for the first time) — for those playing the game for the first time, though, this’ll be a treat.

Throughout the game, a ton of extras are lying about within candles and tombstones as items. That’s all it takes to unlock Symphony of the Night or the original Rondo of Blood. Similarly, songs from the soundtrack can be unlocked in the same way, and then the game will allow you to go back and re-assign what music plays during each stage. So, if you’re an absolute fanatic for the Clock Tower song, then you could have it play through every single stage.

What I’ve noticed with Symphony of the Night is the game takes an inordinate amount of time to load. I think it might be that the PSP has some trouble loading PS1 games in any reasonable amount of time, as it was with Final Fantasy Tactics: War of the Lions. I can’t say as much with the original Rondo of Blood, and the remake’s load times weren’t horrible. It is very similar to being back in the PS1 days, and the game will occassionally take a few seconds to load up.

Castlevania: The Dracula X Chronicles offers a hell of a lot — 3 full Castlevania games for $30. For those who don’t own an original copy of Symphony of the Night, or haven’t already downloaded it from the PSN, owe it to themselves to buy it for that alone. For Castlevania fans, you probably own the game already, even if you don’t already own the system. For everyone else, this game is a solid platformer and will take you a while to reach 100% completion. The only problems lie in some load issues and poor hit detection — while serious, they don’t hinder gameplay completely. It just gives you something to blame all your suckiness on.