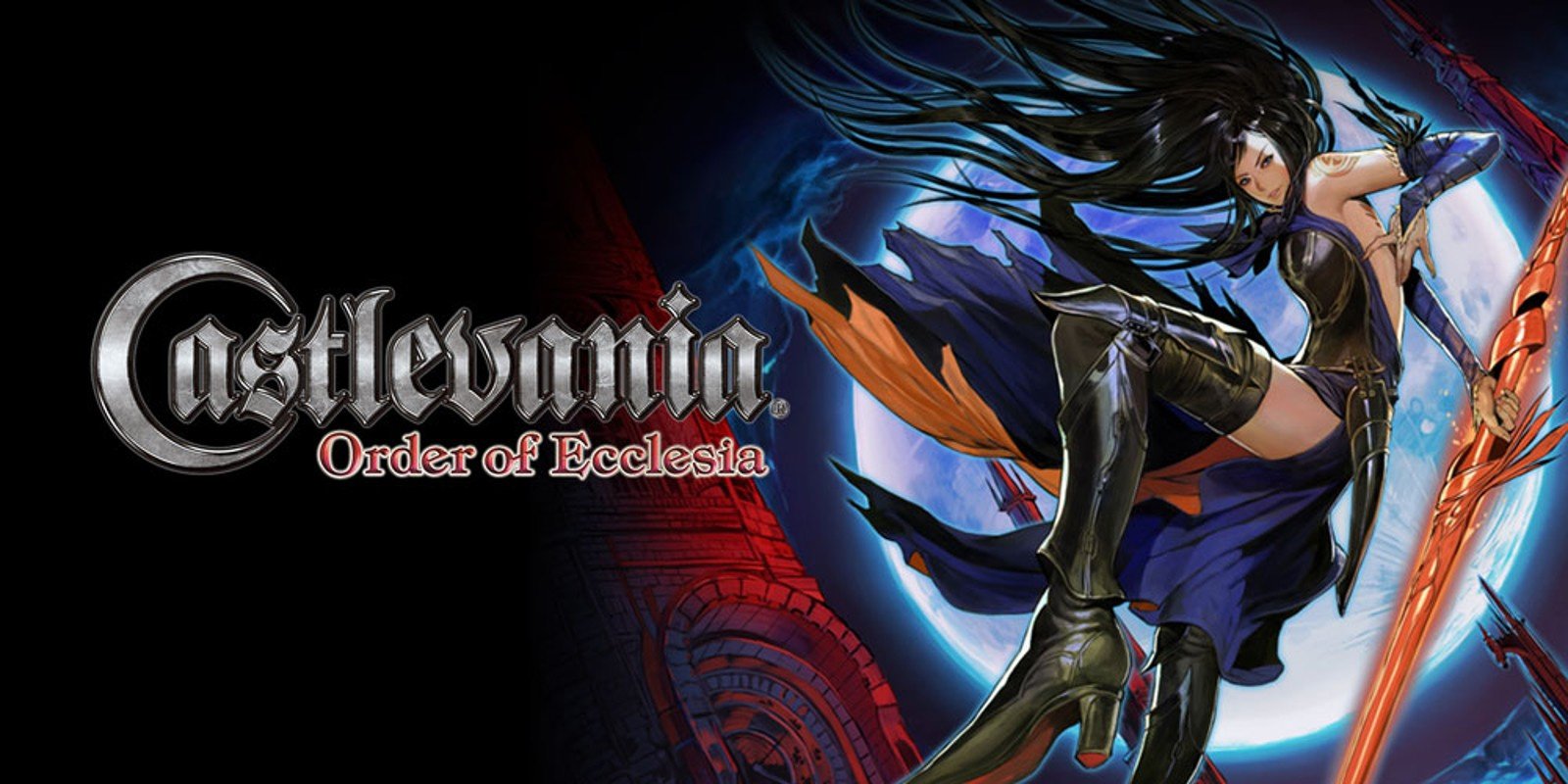 The Castlevania series stands alongside Mega Man, Mario, and Zelda as one of most prolific franchises in gaming. Every game in the series is unique, but like all games that fall under the same name, they do have their similarities. There are three general rules of thumb that players can use to prejudge what kind of game a Castlevania title is. First, the older the game, the harder it’ll be. Second, if it was made after 1997 and it’s in 2D, it will play like Super Metroid. Third, if the game is in 3D, it sucks.

The latest entry in the series; Castlevania: Order of Ecclesia, is a bold one, as it defies at least one and a half of those rules. Curious about which of those rules it breaks? Is that why they call you whiskers?

Then hit the jump for the full review.

For those who have never played a Castlevania game (and sadly there are a lot of you), here’s a quick overview. The series has had many different protagonists, from a werewolf to a little girl who throws doves at werewolves. It’s taken place over many different time periods, from the year 1094 to 2036. Regardless, each Castlevania game is unmistakably different from the next. The only thing that all the games have in common is the theme of killing mythological creatures and classic movie monsters. Back when the series first started in the 80’s, before Silent Hill and Resident Evil, the Castlevania games really stood out for their flirtation with the horror genre. Though today Castlevania may be considered lightweight, back in the day it was about as scary as videogames got. 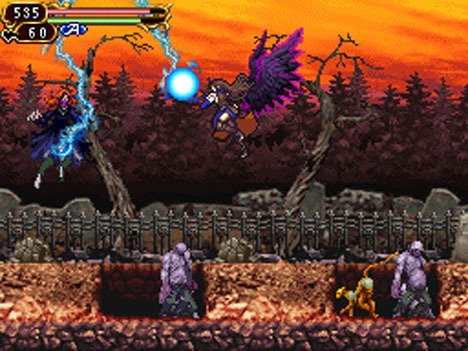 The other thing Castlevania-virgins need to know about is the drastic change the series took with the PS1 entry Castlevania: Symphony of the Night. Before that title, Castlevania games were mostly linear, level based affairs. After that title, they basically turned into action/RPGs, where leveling up and exploring were just as important as jumping over spikes and killing bosses.

Which brings us to Order of Ecclesia, a game that does nothing to push the series forward in terms of inducing fear, but does everything to try and offer a sort of “best of Castlevania” experience that all fans of the series can appreciate. If you never liked 2D action games before, this game will do little to change your mind about the genre, but if you ever loved a Castlevania game, regardless of whether it was pre or post Symphony of the Night, then you’ll want to pick this one up. 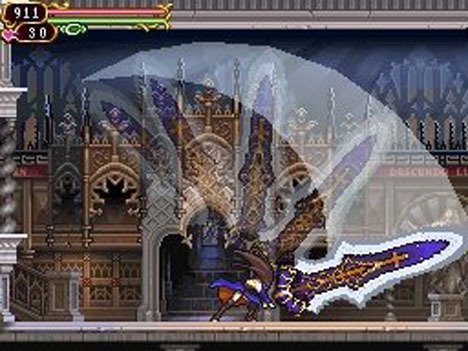 The first thing that Order of Ecclesia does right comes from its visuals. Gratefully, the weak, anime=inspired artwork of the other two DS Castlevania games has been ditched for a painterly illustration style that is much better suited to the game’s gothic setting. Also added to this entry are about fifty new enemy sprites. This may not sound like a lot, but it’s more than any Castlevania game on the DS has added thus far. Recycling is still a problem for the series, as many of the sprites in the game are still borrowed artworks from Symphony of the Night, but the new sprites seen here still do wonders for the game’s potential to resonate with modern audiences. It’s amazing what little touches like adding an enemy based on the little girl from The Ring or Leatherface from Texas Chainsaw Massacre can do to make an “All-stars of horror” game like Castlevania feel current again.

Also new and exciting is the game’s protagonist, Shanoa. Unlike the forgettable she-Belmont from Castlevania Legends, Shanoa is a woman with depth and purpose. She’s on a solo mission to rescue twelve kidnapped villagers who have been imprisoned in areas ranging from a haunted prison to an underwater cave, all while caught in the middle of a power struggle between a fatherly priest and a gun toting maniac. If that’s not interesting enough for you, did I mention that Shanoa is a nun covered in tattoos, with the magic ability to turn those tattoos into anything from a battle axe to a giant, snarling wolf’s head? Well she is, and those traits alone are enough to make her one of the most, if not the most, interesting Castlevania protagonists ever. Part of that extension comes in the form of Order of Ecclesia‘s extremely combo heavy combat system. With time and practice, you’ll be pressing all six of the DS’s buttons in rapid succession to deliver beatings the likes of which have rarely been seen in an action-platformer. The DS’s X button controls Shanoa’s left arm, the Y button her right arm, and alternating between these two buttons will produce much faster attacks than just mashing one on its own. It’s double wielding for the 2D world, and it’s pretty kick-ass. Mix this new combo system with jump attacks, back dashing, slides, and special moves, and the violent possibilities become nearly endless. 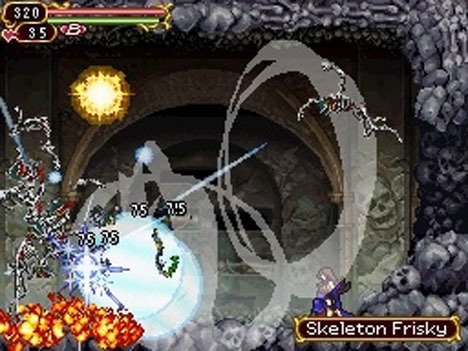 The other innovative aspect of Order of Ecclesia‘s combat is its selection of weapons, or rather, the way older weapons never become fully obsolete. In past Castlevania games, once you got a “better” weapon (faster, stronger, better range), you rarely needed to ever use your older weapons again. What that lead to was the amassing of a huge arsenal of largely obsolete weaponry, with only the top three strongest and widest reaching weapons ever getting any use. Order of Ecclesia keeps that from happening by putting its focus on elemental aspects of your weapons, and not their ability to affect your stats. In fact, almost none of the game’s weapon glyphs alter your stats at all, so on the surface, they are all equally powerful. It’s only through trial and error that you’ll find out which enemies have weaknesses to which elements, causing you to change weapons frequently to better fit the situation at hand. It’s a simple touch, but adds a surprising amount of depth to what is already a valid extension of the standard 2D Castlevania combat system.

Speaking of “standard Castlevania“, Order of Ecclasia does more to standardize and unify the series than any other game before it. The first half of the game plays a lot like old-school Castlevania; linear and action focused. It’s a refreshing return to roots for the series, and could do well to bring older Castlevania fans who dropped out of the games after they got more complicated. As the game goes on, it gradually increases in complexity, and by the end players will see that Order of Ecclasia is just as vast and expansive as any other “Metroidvania” title. In this way, the game acts as a near-perfect bridge between the “classic” and “modern” Castlevania games. Too bad it didn’t come out in 1997, when that bridge would have had the most impact (and alienated the least fans.) 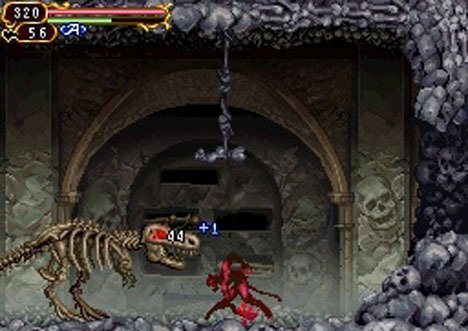 OK, enough of the technical babble. Let me get into the little things that make the game really special. There are a lot more of them than the previously mentioned inclusion of Leatherface, so many that I could never fit them into their own paragraph. Elements like the newspaper reporter whom, upon rescue, gives you a working in-game camera used to take pictures of certain enemies for his magazine. Or how about the cat rescuing moments, which are completely optional, unexplained, and do little for you other than provide the Chrono Trigger-like satisfaction of being a proud cat fancier.

Then there is the inclusion of multiple unlockable songs from the original Castlevania, songs that can be activated at any time to replace the game’s regular soundtrack. And who could forget the way that Shanoa and many of her enemies scream the name of whatever attack they’re using mid-thrust; the best example of which comes from the game’s last boss, who frequently comes at you with a move called “RACHEL RAY!” (I think). There is so much more I could mention, but I haven’t the space. It’s hard not to gush about all this minutia, because of the way it all comes together to makes Order of Ecclasia what it is: a 2D game that feels as real as any 3D title I’ve ever played. 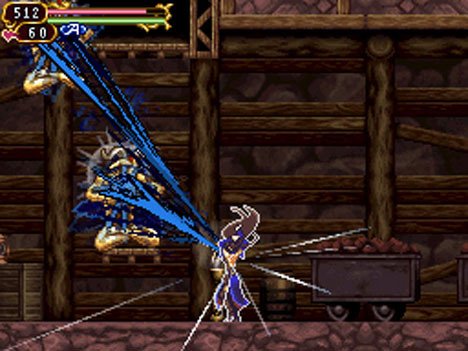 The game does suffer a few missteps. Some of the earlier, more linear areas are a little too linear, as in they involve nothing more than walking from left to right while killing enemies, with no platforming or vertical movement involved. “Useless” is the first word that comes to mind when describing these small, inconsequential parts in the game, and though there aren’t many of them, they do mar what is otherwise a fantastic mix of action, exploration, and platforming. The game is also a little short. I chalked up about eleven hours play time before seeing the credits, and that was with skipping most of the sub-quests. Keep in mind, that’s eleven hours recorded play time, not counting the many hours spent dying and restarting on the game’s tough-as-nails bosses. In reality, it probably took more like twenty hours for me to finish the game, and that’s still without collecting all the glyphs or playing through it again with the hidden character. Order of Ecclesia relies less on backtracking and more on hard won battles to expand its length, and as such is a game that is hard to measure in minutes.

Order of Ecclesia isn’t a move forward towards a bigger and more complicated Castlevania, but instead reaches a hand out to those who may have abandoned the series when it lost its action oriented focus. Everything that makes Castlevania what it is; huge bosses, monster-slaughtering, as well as weapon-gathering and castle-raiding, is all here, and it’s done spectacularly. It’s the only Castlevania game I feel I can truly recommend equally to Castlevania fans of any era. It doesn’t matter if Castlevania IV, Rondo of Blood, Symphony of the Night, or Aria of Sorrow is your current favorite game in the series, because after you play Order of Ecclesia, you may have a new number one on your list.

Score: 9.0 (9s are a hallmark of excellence. There may be flaws, but they are negligible and won’t cause massive damage to what is a supreme title.)