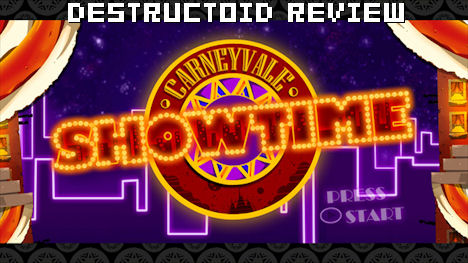 When I first started challenging Community Games developers to submit their work for review on Destructoid, I had hoped that some real gems would come out of the woodwork and prove their worth. I had not, however, expected CarneyVale Showtime.

At the risk of spoiling the whole review before you even read it, let me say that if you’re at all interested in the potential of XNA games, then you really, really, really need to check this one out. A breath of fresh air? This is more like a gale of the stuff.

Read on for the full review. 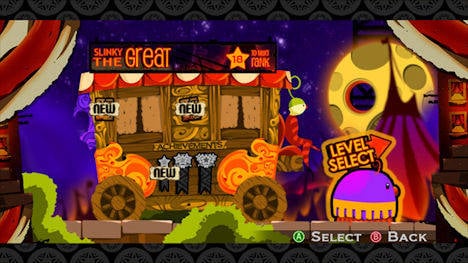 As you may have already gathered from the name, CarneyVale Showtime is all about the thrill of the circus. This is no ordinary circus, however. This is a circus in which living puppets perform death defying acrobatic stunts for the pleasure of the crowd, their ragdoll bodies flailing around for all to see. Taking on the role of Slinky, your job is to make it from the launch cannon at the bottom of the stage to the ring of fire at the top as gracefully as possible and without getting killed.

At first, it’s as easy as pie, and not even very interactive. The guiding principal of CarneyVale is as old as the 16bit era, and if you’ve ever played Ristar, you’ll probably recognize the main mechanic. Slinky is propelled through the stage by Grabbers, which you activate by pressing the A button. If Slinky is close enough, the Grabber will shoot out a grasping claw which holds Slinky and begins to spin around in a circle. To move on, you simply let go of the A button and the grabber will free Slinky, causing him to fly through the air with the trajectory and speed handled by simple but sensible physics.

It’s a very simple concept, and at first you might be fooled into thinking that this is the most interaction you’ll get from CarneyVale. However, you’d be dead wrong. As you progress through each stage, Slinky earns new abilities and overcomes increasingly dangerous obstacles. By the end of the game, you’ll be performing mid-air dashes and riding rockets, avoiding pillars of fire and getting fried by electric blocks. What starts out as an incredibly simple affair becomes a complex game of risk and reward. 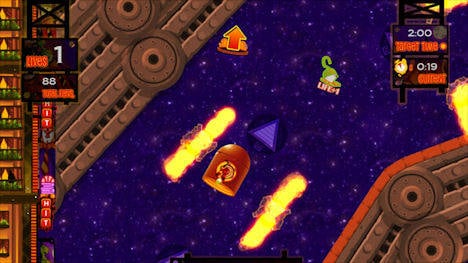 Simply getting through a stage won’t be enough to impress the audience. There are a number of sub-goals and each “performance” is graded depending on how many of these goals are met. Completing a stage within a short amount of time, collecting hidden stars and bursting all the balloons will earn you more stars when your performance is “reviewed.” You can also learn to perform a variety of tricks such as triple backflips and wall bounces, which will earn you more fans and help raise your overall ranking.

The great gameplay is helped along by a wholly charming visual style and terrific music that really sets the mood for this carnival-themed game. The physics make total sense, and the ragdoll form of Slinky is a joy to watch when flying high into the air thanks to a well-timed throw. Everything is bold, bright, colorful and clear. A real treat when compared to the drab and dark titles that saturate the market.

As well as the main game mode, players can create their own stages thanks to an immensely user-friendly interface that allows one to generate and place objects anywhere on the map. Sadly, there doesn’t seem to be a way to share the content, which would have made this feature all the more worthwhile. 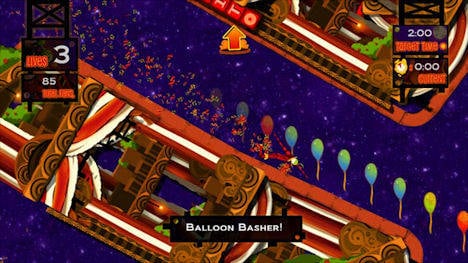 Like with other XNA games out there, CarneyVale makes up for the lack of Achievements with its own Award system. While not exactly doing much to up the replay value on their own, they are still a nice extra feature. Unlockable concept art is also there for the taking.

CarneyVale Showtime is inventive, addictive, charming and very clever, with deceptively simple gameplay that soon gives way to something far more complex and fiendish. If there were any justice, this game would be expanded and end up on the Xbox Live Arcade. As it stands, however, CarneyVale is an absolute steal for 400 Microsoft Points. If you loved some of the high profile XBLA games that released this year, then you owe it to yourself to check this little game out. Highly recommended indeed.

Score: 9.0 Superb (9s are a hallmark of excellence. There may be flaws, but they are negligible and won’t cause massive damage to what is a supreme title.)