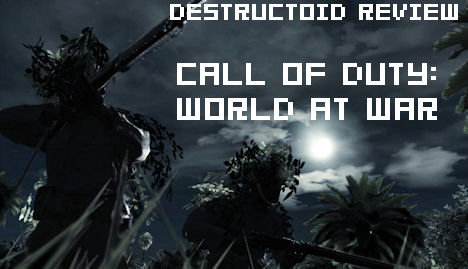 Call of Duty 4: Modern Warfare is easily my most played game of 2007. It was, in fact, the title that made me truly care about online gaming, thanks to its fast-paced “meat grinder” style of play and fantastic promotion system. It was one of the biggest releases of its year, critically acclaimed and popular enough to knock Halo 3 from the top spot of Xbox Live’s most played titles.

Infinity Ward had done an excellent job with a game that not only provided addictive multiplayer, but an engaging and sometimes shocking single player campaign that truly distinguished it from other war shooters. Imagine the dismay of gamers everywhere then, when it looked like Treyarch was going to play it safe and set the follow up title back in World War II.

Does Call of Duty: World at War prove the critics wrong and show that Treyarch can do just as great a job with the franchise as Infinity Ward, or is it just another World War II game that does nothing to make its mark? Read on for the official review … 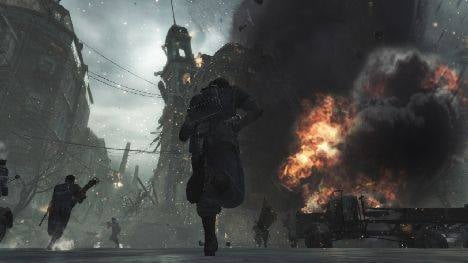 World at War takes us back to the series’ roots of World War II, this time changing things up by setting it in both the Pacific conflict and the fall of Germany. Switching between a US Marine and a Russian Private, you will play two stories and fight against both the Japanese and German forces. That’s about all I can say about that.

If there is a story in World at War, it doesn’t come across very well. Unlike the previous title, there aren’t really any interesting characters or a sense of plot outside of what actually happened in WWII. The game almost cynically attempts to recapture the shocking and dramatic moments of Modern Warfare at times, but the characters and events are so vaguely distinguished that you are never compelled to care. Only at the very end does the game approach anything that feels personal and interesting, but it’s way too little, way too late.

This isn’t helped by the fact that the single player campaign is, quite frankly, stupid. There really isn’t a better way to describe it, but the single player actually redefines stupidity in game design. The unique algorithm of CoD titles whereby enemies constantly respawn until the player reaches key areas has always been slightly jarring, but the game assaults you with bullets from so many angles, often from enemies that can’t even be found, that Treyarch has almost parodied the entire fundamentals of the series.

There are times when, without even any indication that health has been lost, you’ll suddenly just die. Sometimes it’s because an enemy snuck up and hit you, but more often than not you simply won’t know how you died and will be left scratching your head wondering what the hell just happened.

Then there are the grenades. If you thought grenades were annoying in Modern Warfare, prepare yourself for a laugh riot, because grenades this time around are ridiculous. They seem to randomly appear, even in really improbable locations, sometimes one after the other in quick succession, and will always pop up if you dare to use cover for anything longer than thirty seconds. A particular checkpoint even spawned me on top of one. Grenades will account for about 80% of player death in the single player campaign, if not more. 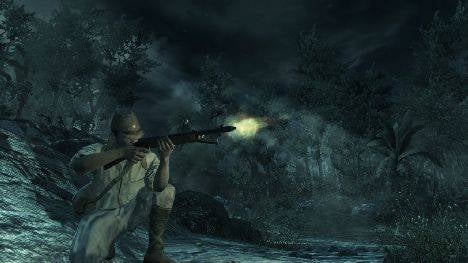 It’s not like challenge in a game is a bad thing, but it’s simply unrefined and vulgar to throw bullets and bombs at a player and deign to call it challenging. The worst part is that there simply isn’t any reward for all this. A well-designed hard game constantly rewards the player for absorbing punishment. World at War is all stress, all the time, with no carrot dangled in front of the player to compel one forward.

I’m trying to think of where the campaign redeems itself but I honestly can’t think of much. There’s co-op, if that helps, and at least setting it during the fall of Berlin is a rather unique and interesting addition. The weapons are, of course, “new” and there is a flamethrower, but it’s not really all that much fun to use and I found myself wanting a machine gun again within minutes.

Ultimately, the single player campaign is atrocious and I had a rotten time playing it. It seems to take everything that was frustrating about Modern Warfare, magnify those elements, and then leave out the interesting objectives, characters that matter, and anything that leaves a lasting impression beyond anger and disappointment.

Luckily for World at War, the campaign is but a small part of the overall package, and even luckier, the game is using one of the best multiplayer structures already pre-built. If you were a heavy player of Modern Warfare‘s multiplayer, then you’ll know what to expect, because Treyarch has barely changed a damn thing.

The maps are new and the models are obviously different, but the multiplayer makes no attempt to bring anything remarkable to the table. Ultimately, this works in the game’s favor, since you can’t go wrong if you’re using something that was already such a success. However, unlike say, Gears of War 2, which built upon a pre-existing engine and mechanics to create something even bigger than before, World at War does it completely by the numbers, never daring to stand on its own outside of a few new Perks and a different weapon set. 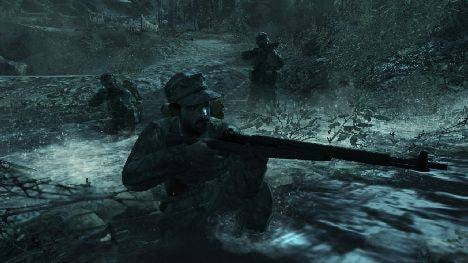 The multiplayer is by no means bad. It’s Modern Warfare set in WWII, there’s no way it could actually be terrible. However, the maps seem a lot bigger this time, and this is really counter-intuitive to the experience. One of the best parts of CoD4‘s multiplayer was how the tight environments meant that action was around every corner, and that the battlefield was one of pure chaos. In WaW, however, there are times when you can spend ten minutes trying to find an enemy, and encountering nothing. I once hopped into a game already in progress, and didn’t see a single enemy soldier, save for one tank.

That’s not to say that the multiplayer doesn’t have its moments. Maps like Asylum bring back the feeling of CoD4, and being able to pilot tanks and unleash dogs can make for some real hectic gameplay. However, most of the time this game just brings back fond memories of the last title while doing very little to make one care about this one. It is basically Modern Warfare, but with none of the love.

The only time the game comes out of its shell and tries something different is with Nazi Zombies, an unlockable that is achieved upon completion of the campaign. It’s probably the best part of the whole game, but it’s cute for about five minutes before growing tiring. With Left 4 Dead already providing first-person zombie shooting, this is something that just doesn’t cut it. It is certainly not worth the hassle of unlocking. 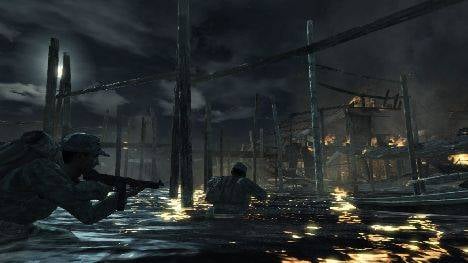 Ultimately, Call of Duty: World at War feels completely unnecessary. It’s not bad, but most of the good stuff is only good because Infinity Ward made it and released it last year. It’s unfair to say that this is an expansion pack because it has a bit more meat than that, but it’s barely much more. With an awful campaign and a multiplayer that is fun but completely appropriated, this game can’t hold a candle to the last. Fans of the series should check it out, but I couldn’t in good faith recommend a purchase, at least at full price. Give it a rent or check out the bargain bin a few months from now. It’s not like Activision won’t make millions out of the game anyway which, ultimately, is the point … and in this game, it really shows.

Had it actually been an expansion, it could have really brought something to the franchise. As it stands, World at War simply exists.