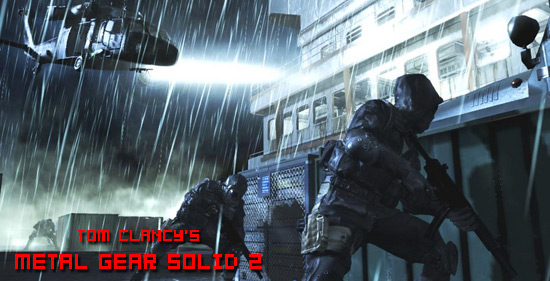 The first two Call of Duty games were widely praised as the next step in the first-person shooter genre. They had bombastic action sequences, gripping storylines and enough Nazi-bashing to make George Patton squeal like a young girl. Even today they stand out as the finest examples of the ultra-over-saturated World War II FPS subgenre, but like the Treaty of Versailles the series’ string of stunning successes couldn’t last forever. Call of Duty 3, while a competent game, certainly didn’t live up to the brand, and while above-average, was seen as the low point of the series.

With Call of Duty 4 though, Infinity Ward (developers of the original two titles) have taken the reins back from Treyarch (developers of CoD3) and abandoned the World War II setting. This new game takes place entirely in the modern day, while clinging sharply to the things that made the series a success in the first place. How’d it turn out? Hit the jump to find out.

If there’s one thing the first two Call of Duty games did extremely well it’s that they set up an engaging story as a backdrop for their explosive action. The stories have never been as philosophically deep as something like BioShock, and they never challenged your own perceptions of morality like Portal recently did, but they do manage to tap into that same visceral feeling as Spielberg’s Saving Private Ryan that gives a real sensation of meaning to the chaotic violence all around you.

Call of Duty 4 succeeds in exactly this same way. It’s story is exactly the sort of thing you’ve seen in hundreds of summer blockbusters since the 1980s: madman acquires nuclear weapons, madman uses nuclear weapons, the good guys form a team of badasses whose only tools are bravado, bullets and explosions, and through the might of jingoism and hyper-masculine guns-as-phalli fantasies the ragtag team of heroes saves the world. While the title has an illusion of depth, the in-game choices all boil down to where you’d prefer to stand when you blow the heads off of incoming Jihadists entirely secular gentlemen of vaguely Persian ancestry.

That’s not to say the game is unengaging, however. This is the sort of title that through the magic of intense pacing and clever audio/visual tricks can easily make a 6 or 7 hour play session seem as if it were only 20 minutes. It’s a backhanded compliment to say this makes the game’s story blow by in a strikingly short amount of time, but compared to other FPS titles, CoD4’s sub-15 hour run-time is (unfortunately) pretty standard — and often much more enjoyable.

In fact, if Infinity Ward’s main goal was “engaging gameplay” they utterly nailed it. It’s easy enough to create a title where you kill people or blow up machinery, but adding a sense of tension to the proceedings is apparently quite difficult, at least based on the number of FPS titles available on PCs and home consoles that are strikingly generic. CoD4 succeeds in this area for two main reasons: first, many subtle tweaks have been added to create almost primal reasons to murder your opponents. From a storyline with an innate psychology that creates a strong illusion of the same us-vs-them philosophy politicians have been using for years to justify the battles CoD4 mirrors, to tiny gameplay nuances such as the ability to return thrown grenades to enemies with a toss of your own, the entire thing feels like you’re in the middle of a battle in the dusty streets of some Arabic town. Adding to that enemies that take cover, shout at you in appropriate dialects and wear the same dirty, scavenged military gear their real-world counterparts are known for, and the game immerses you in a way that few other titles ever have.

Secondly, and most importantly, the game never lingers too long on any particular playstyle. In the middle of the campaign, there’s a stretch of three missions where you’ll go from dropping heavy explosive rounds on Russian soldiers from the TV-assisted gunner’s station of an AC-130 gunship, to slogging through the Russian countryside in the middle of the night, to a 15-years-prior flashback where you and another soldier are tasked with crawling through the ruins of Chernobyl with only a sniper rifle and a pistol in a quest to assassinate a local warlord. That last mission in particular, rachets up the tension present in the entire thing to previously unseen levels — lying prone in a field while Russian troops patrol literally two feet from you is an experience that anyone with even a passing fetish for military ops absolutely must experience.

One of the most interesting points of the whole thing, whether it was intentional or not, is that this video game demonstrates a breed of warfare that has, in effect, become a video game. This is most striking in the AC-130 mission, which is much easier than either of the ones that come before or after it. It seems that as the layers of obfuscating technology between a soldier and the people he’s killing grows, the connection with reality blurs. As I said, the AC-130 mission is strikingly simple, almost a point-and-click affair, and while it does give you an interesting respite from the rest of the game, it also loses a lot of the visceral intensity of being shot at and seeing your bullet split a man’s face in two.

Call of Duty 2 became a darling of the multiplayer set due to its realism that contrasted sharply with the bouncy, fictional reality of the big FPS of its time, Halo 2. Call of Duty 4 manages to beat out even CoD2′s stunning experience by adding an RPG-lite experience system similar to that found in the latter-day Battlefield titles. Simply stated: the more you play, the more you’ll unlock useful perks for use in game. Whether they be bigger guns or a more resilient soldier, each perk is useful and desirable in its own way. Sadly this also leads to one of the title’s biggest flaws: new players have to contend with gamers who have attained perks that make them almost god-like. While it’s never impossible to kill an opponent, the difference in abilities is extremely palpable and will turn off many new gamers immediately. I don’t know why they couldn’t stratify the multiplayer games based on character level as they have in Halo 3, if only to keep players with similar perk levels competing on even ground. Then again, CoD4 probably can’t hope for the kind of online presence a Halo draws, so had they split the playerbase in this way, it might be difficult to find games in which to play. Still, having to make the choice between having no one to play with, or having people to play with who can shoot you through walls from 4 miles away, you can see the kind of issue Infinity Ward had to contend with.

The graphics in Call of Duty 4 are quite good. While I wouldn’t go so far as to say they’re the new high water mark for the systems it appears on, they definitely convey the environment convincingly. The developers seemingly spent a lot of time adding tiny flourishes like the vague flickering of the green LED night vision goggles or the imprinting of one’s own capillaries on one’s vision after staring down a flashbang. There are never any jaw-dropping moments, but the entire thing subtly provides further enhancement to the engaging plot by visually convincing you that you’re actually there.

As a special aside, I would like to highlight the “death effects”. It’s typical for these titles to give enemies ragdoll reactions to being shot or exploded, but there’s something truly striking (and depending on your slant, either extremely satisfying or disturbing) about the massive splatter and violent spasm following an opponent catching a round from an AK-47 in the eye. It never approaches cartoonish, but it definitely conveys the damage a high-caliber round can do to a person’s soft tissue.

As much as I’d love to be able to say this title is an absolute must-buy there are issues that mar its surface. As stated above, the game is short. While that may be an illusionary side effect of the intense plot, you’ll be wishing for more when it finally comes to its thrilling conclusion. Also, the title is incredibly linear. It offers the spectre of choice in some missions, but when compared to the recent BioShock, you realize you will have seen the entire thing in one play through.

Combine these with the multiplayer system’s well-meaning but ultimately poorly implemented experience system, and you have a solid title that would serve better as a rental for anyone who wasn’t already excited about it enough to buy it at launch.