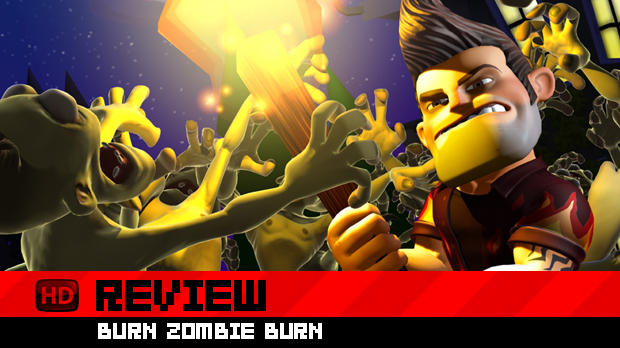 Zombies are great, aren’t they? Damn right they are. As enemies of humanity they are persistent, deadly and singularly driven to accomplish their goals. As mirrors into the soul of mankind, they are unmatched in the history of supernatural villainy. And, sometimes, they’re just kinda funny.

Burn Zombie Burn is a game where the art style would suggest that latter purpose for the undead marauders was the focus of the designers. After a brief amount of play, however, it quickly becomes apparent that these aren’t any more cute or cuddly than what you’d find in a George Romero film. They’re brutal and unstoppable, regardless of whether they’re wearing tutus or not.

Hit the jump for our review of Burn Zombie Burn.

There’s a fatal flaw in many games which are centered around zombies: Victory. As much as I would like to believe that I have the chops and planning necessary to survive a zombie outbreak, I know in my heart that this is an impossibility. The dead will walk the Earth and, eventually, I will walk with them.

It’s always refreshing to play a game which really espouses that fundamental truth and Burn Zombie Burn is like a cool drink of water sipped atop a pile of fetid corpses in that respect.

The object of Burn Zombie Burn is to kill zombies. That’s it. There’s no plot, just straight-up arcade action. Controlling the rockabilly Bruce (who, with his square jaw and dialogue, is likely an homage to B-movie legend Bruce Campbell), players attempt to survive as long as possible while being constantly assaulted by the undead. 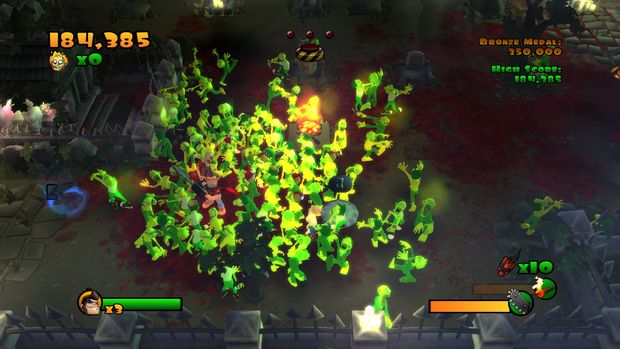 While it’s easy to kill a standard zombie, there are a lot of specialized monsters in this game with different traits that must be handled in different ways. Zombies with dynamite strapped to their chests explode either when getting close to you or when hit with fire or another explosion, while armored zombies require you to get up close and personal with a melee weapon. Poisonous zombies slowly drain health if you stand too close while ballet dancing zombies and football player zombies charge headlong at you at great speeds. There are ten types in all and the variety is great, as you never really know what’s going to come next and in what numbers.

Each level drops groups of zombies as numbered waves. Don’t let the “wave” terminology throw you off, though. The flood of re-animated bodies does not stop to allow you to clear them all away, with waves dropping after a certain (brief) amount of time has passed regardless of how many remain shambling. The way this manages to keep the pressure on is great with each wave being progressively more difficult both in their composition of zombie types and sheer numbers. 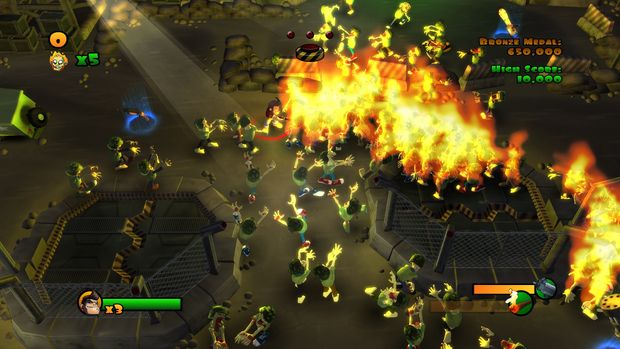 Getting a high score in this game requires you to carefully balance a number of factors. All zombies score you points but the manner of their disposal is what determines how many points are earned. Killing a zombie with a gun, for example, scores less points than using a cricket bat.

If you want to earn a serious amount of points, you’ll need to take advantage of score multipliers and this mechanic is where the cleverness of the designers really shines through. Bruce’s secondary weapon is a torch which he may hold out and set zombies ablaze. These flames will spread to other zombies and objects in the environment and your score multiplier is equal to the number of zombies lit up by Bruce. Since burning undead move more quickly, deal more damage and are no longer afraid of fire, they become much more dangerous as a result.

Points are not the only reason to set zombies on fire. Enemies will occasionally drop power-ups as you kill them and the items dropped are different depending on their state of inflammation at time of death. Normal undead will leave behind food, ammo and explosives while the firery sort will give you a boost to your speed, increase the range of explosions and upgrade your dynamite to proximity mines or remote-detonated bombs. Keeping alive means controlling the population of burning zombies to get the things you need. 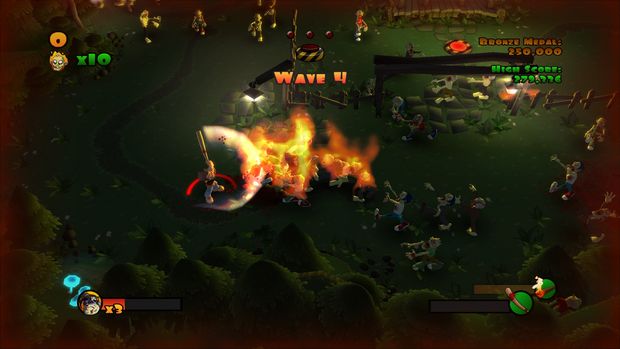 The game’s six levels run the full gamut of zombie movie cliches. There’s a cabin in the woods, an army base and the drive-in theatre. Every level can be played in three different modes:

At the most basic level is Free Play, where the only thing the player has to worry about is keeping themselves alive. In this mode, every level has a special “event” button on the map which activates as you chain together kills with a singular weapon type. Hitting the button has a different effect on every level, some of which are extremely helpful for clearing out enemies while others can be deadly traps for you.

In the Timed mode, you are given a time limit in which to score as many points as possible in addition to the number of lives awarded. It’s a good mode for people who have gotten the hang of Free Play and want a little more challenge, as putting more time on the clock means killing burning zombies and hoping they drop alarm clock power-ups to get an additional 20-30 seconds.

Last is “Defend Daisy”, in which Bruce’s girlfriend sits helplessly in a pink convertible while the horde of zombies tries to kill her. Burning zombies will drop health restoration items for her, which is a damn good thing as the surface area of her car allows for huge swarms of undead to completely surround her and can quickly take the damsel out. 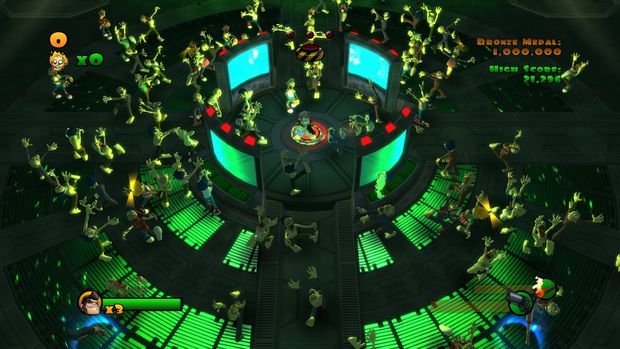 While it’s great that all three modes can be played on every level, the manner in which they are unlocked is a bit on the tedious side. Unlocking a level through Free Play only unlocks Free Play in the new level. Every mode must be unlocked independently on every level and it really drags things out unnecessarily, especially for a game which is centered entirely around quick, arcade-style play.

There are a few other minor gameplay annoyances, such as an empty weapon needing to be fired one last time before it can be dropped or replaced by another one and that only zombies which Bruce is directly responsible for burning providing a bonus. These problems aren’t anything serious but they can be frustrating during particularly heated games.

More irritations come from the game’s multiplayer modes, which are entirely local with no online play available. Every single level of the game can be played in co-op and versus modes, but only if you’ve unlocked them in single-player first. Achieving success in a co-op game also does not translate to the single-player modes, so you can’t count on a friend to help you open up the whole game. 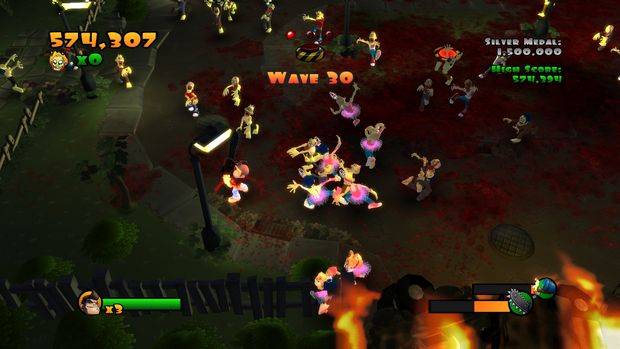 Then there’s the issue of split-screen, which is managed fairly poorly. While other games of its type might dynamically zoom out to keep both players in the same screen, Burn Zombie Burn uses a vertical split-screen that doesn’t allow you to see much of the playfield at all. There’s no method for keeping track of where the other player is, let alone the zombies, and it makes the game feel cramped.

Mediocre multiplayer aside, Burn Zombie Burn is still a very fun to play and has an impressive amount of complexity for what it is. The zombies are charming, funny charicatures with outlandish behavior which are sure to bring a smile. Fans of dual-stick, arcade shooters should have a good time playing, while those less interested in score-based games may be unimpressed.