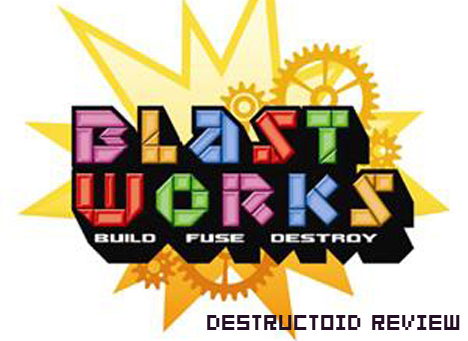 Most people associate the Nintendo Wii with three things; motion controls, market dominance, and last-gen graphics. Diehard gamers know better. The Wii is not all about waggle packed budget titles. The console also plays host to more old-school, skill based 2D shooters than any home console since the Sega Dreamcast. Less than two years after it’s initial release, the Wii has been been graced with Metal Slug Anthology, Geometry Wars:Galaxies, Heavenly Guardian, The Mokey King: The Legend Begins, Castle Shikigami III, and now Blast Works: Build Trade Destroy, all 2D shoot ’em ups, all firmly grounded in the traditions put forth by the original videogame, Computer Space.

Does this latest entry in videogame’s oldest genre join classics like Ikaruga and R-type Final in the upper pantheon of SHMUP gods, or is it just more Wii shovelware for the fire?

Blast Works isn’t an original game. It is more of a re-adaptation of the PC freeware classic Tumiki Fighters. The defining characteristic of both Blast Works and it’s predecessor is the “sticky ship” gameplay mechanic that they both hold. Much like in the Square classic Einhander, after an enemy ship is destroyed, it’s weaponry can be snatched and attached to the player’s craft, adding significantly to your arsenal. But unlike Einhander, the amount of enemy cannons one can procure in Blast Works is limitless. A skilled player will typically have more than twenty enemy ships attached to it at one point or another, creating a clump of mass destruction even the King of All Cosmos would be proud of.

Unlike Katamari Damacy, the huge cluster of power one can form in Blast Works is not all fun and games. Captured enemies are easily lost in battle, which makes the game tough, as holding enemy ships not only increases you ship’s firepower, but also to increases your score at a significant rate. For every second you maintain attachment to a captured enemy, you get a score bonus. Keeping hold of ten or twenty ships is the only way to rack up enough points to gain the extra lives necessary to survive Blast Works‘ grueling campaign mode. If you want to keep your stolen property from being blown off your ship by enemy fire, you must be skilled at retracting it at a moments notice. Much like the constant color switching/shot absorption needed to survive in the modern classic SHMUP Ikaruga, Blast Works requires the player to extend their massive collection of enemy weaponry, retract it to dodge enemy bullets, extend it again to capture more ships, and swiftly retract again as the screen fills with death pellets.

Blast Works/Tumiki Fighter‘s core mechanic is amazing; a truly original addition to the SHMUP genre, not an easy feat considering SHMUPs have been around for nearly forty years. Sadly, it’s not enough to make Blast Works’ campaign mode a classic. The “clump of death” gameplay goes a long way to keep the game interesting, but the key to creating a truly great SHMUP is in the details; graphics, music, level design, and bosses. On all four of these fronts, Blast Works falls a little flat. While the game’s Tron-esque visual style certainly makes a statement, the game’s levels are flat, barren and generic, based around such unimaginative settings as “the city”, “the bay” and “outer space”.

The music is not much better. While a few of the game’s tracks are catchy, most of the game’s levels are played to the tune of some of the most bland techno to be found this side of Basshunter. As for Blast Works’ level design, it’s almost non-existent. Throughout the game’s fifteen levels, only two or three offer any sort of environmental hazards: walls. Not quite up to flying penises and unruly Moai heads found in classic shooters like R-Type and Gradius. The ability to play Blast Works‘ campaign mode with up to four players helps make up for the bland level design, but it’s like pouring perfume on a pig: not quite enough to make it pretty.

All those failings would be forgivable if Blast Works‘ bosses came through with the shock and awe, but they just don’t. There are some exceptions to this. There is a two headed giant robot boss at the end of stage five that does inspire some fear and respect from the player, and a massive octopus boss at the end of the afore mentioned “bay” levels which put a smile on my face. Sadly, these types of boss encounters are in the minority, as most of the bosses in Blast Works are just big planes that shoot out a bunch of bullets. Though they do require skill to beat, they don’t require strategy. If you can utilize the same “Don’t get shot by the bullets” technique you perfected in order to get to a boss in order to beat the boss, you’re bound to score yourself a victory.

With all that blandness, I still managed to find motivation and pleasure, in playing through Blast Works multiple times, thanks to the plethora of unlockables the game offers. I’m not talking about just any unlockables. I’m talking about four games previously available only on PC, all with improved graphical displays, all by Kenta Cho.

These games include the “Geometry Wars with bosses” classic Gunroar, the previously mentioned Tumiki Fighters, the fast paced 3D shooter/racer Torus Trooper (which the recently released WiiWare title Gyrostarr heavily borrows from), and rRootage, a series of high tension boss fights playable in modes based on other  classic SHMUPS, including Ikaruga. I won’t go too far into raving about how great these four games are, as they are each deep and interesting enough to warrant their own reviews. I will say that each is worth at least the same seven to ten dollars that WiiWare SHMUPS, Gyrostarr, Star Soldier R or Protothea would cost you.

And finally, we have Blast Works’ level editor. This alone is probably worth the game’s forty dollar asking price. First of all, some of the most interesting levels in Blast Works( like the  black and white living room level), and the most interesting bosses (like the giant pair of scissors and the evil pirate spider) are only found in the level editor. The inclusion of this “level editor exclusive content” goes a long way to inspire the shy (or the lazy) gamer to get off their butt and start making their own games.

From there, it takes minimal effort to start creating your own ships, enemies, bosses, and stages, upload them to www.blastworksdepot.com, and/or download new levels and ships. In the past twenty four hours, I’ve played a new Blast Works level based on both Super Mario Bros. and Sonic the Hedgehog, and then downloaded graphcs based on Mega Man, a Hu-Card, and Ryu from the NES Ninja Gaiden to boot. All this free of charge or friend codes. Take note, Wii developers, this is how to do DLC on the Wii (that means you too, Nintendo).

On it’s own, Blast Works’ campaign mode would probably only deserve a 7.5. It’s a solid shooter with an amazing gameplay mechanic, but overall the main game is too bland to deserve a higher score, even at the budget retail price of forty bones. However, the four unlockable Kenta Cho games included in the package (each one being as good if not better than Blast Works‘ campaign mode) ups the package’s value considerably. Throw in the level editor and it’s offer for endless new levels and its ability to give anyone with a creative mind a chance to take on Kenta at his own game, and you’ve got yourself a…