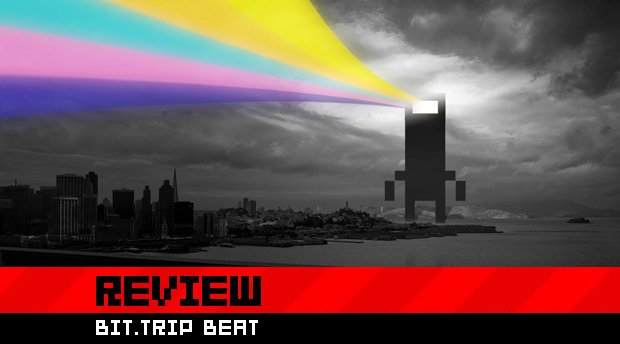 Out of all the games that make up this “retro-revival” thing that’s going on right now, Bit.Trip Beat is probably the “retro-est.” Like the Geometry Wars games, Bit.Trip Beat takes its cues from the pre-NES era of gaming, but unlike that new American classic, Bit.Trip Beat doesn’t just feel old-school; it completely revels in the fact that it’s basically a glorified Atari 2600 game. From controls to graphics to sound, the game is often indistinguishable from something made in 1975. To borrow that strongly from an era that predates many Wii owners by ten, twenty, or even thirty years, is a bold move indeed.

Bit.Trip Beat feels like a game from an alternate version of Earth, where Space Invaders, Pac-Man and other games with actual “characters” never came into being. Imagine if after Pong, games just kept evolving in that direction: remaining totally abstract, button-free, and with all player movement restricted to the Y-axis. That’s Bit.Trip Beat, a game from a world where the Atari 9999 is the most popular console on the planet.

Is this alternate reality a place you want to go to? Does rejecting of thirty years of gaming “evolution” lend itself to a fun experience? Hit the jump to find out.

On paper, Bit.Trip Beat is just a really weird shmup: a shmup where you can’t shoot, can’t move horizontally, and have to hit bullets and obstacles instead of avoid them. That may sound fun to you, or it may not. Either way it doesn’t matter, because Bit.Trip Beat on paper has nothing to do with Bit.Trip Beat in practice. Actually playing Bit.Trip Beat is like nothing else I’ve ever done; it made me laugh, cry, and most importantly, completely dissociate from my body. The game’s name is totally literal; Bit.Trip Beat really can take you on a trip, but it’s not a trip to another physical place. Instead, the game can take your brain to another state of mind: that “zone” that people usually can only get to with hallucinogens, meditation, or tantric sex. 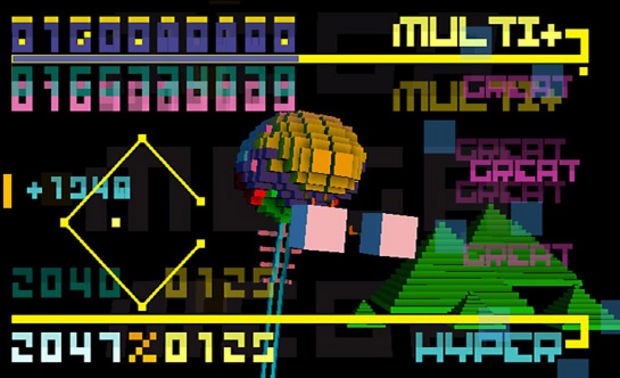 Unlike most modern games, Bit.Trip Beat doesn’t try too hard to create a believable visual world for the player to enter; instead, it hypnotizes you by throwing a series of increasingly complex visual patterns on screen, all arranged in perfect unison with the game’s driving soundtrack. As the game progresses, this combination of sights and sounds becomes so engrossing that passing hours will feel like minutes. The more you play, the less aware you become of the world around you, until all that exists in your world are you and the beats (the formal name for those little dots flying at you).

Sadly, due to necessity of design, the game takes its time before it gets that engrossing. The whole game is controlled via “tilt” controls, and requires no buttons or even D-pad/analog sticks. People who haven’t been into gaming since the 1970s will feel right at home here, but anyone used to manipulating analog sticks or 6-12 button controllers might need some time to get acclimated. For this game, “some time” means two or so minutes at the start of the first level, which consists of very easy beat patterns to contend with as you learn just how much a twist of the wrist affects your paddle on-screen. 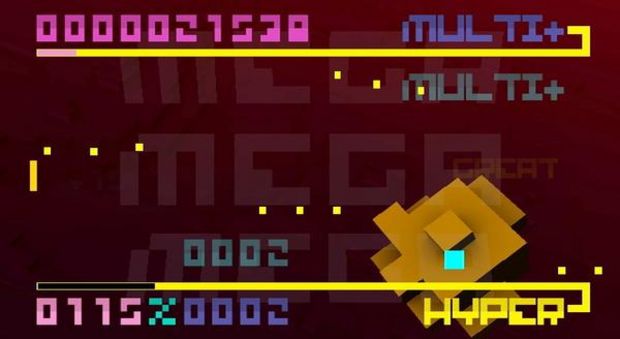 After that, the game goes completely bananas.

Just when you think you’ve seen every kind of beat that the game could throw at you, another one rears its evil head. There are bouncing beats, shrinking beats, laser beats, disappearing beats, wall beats, streaming beats, power-up beats, stalling beats — the list goes on and on. This leads to many moments through the course of a game where you’ll start to feel a false sense of security. You’ll think you have the beats under control. You’ll think that they can’t possibly get the best of you (again), then suddenly a flurry of never-before-seen beats will show up and you’ll have no idea how to deal with them. This flow between panic, calm, and panic forces the player to be constantly on their toes.

If you miss too many beats in a row, you’re screwed. Conversely, if you hit enough beats in a row, you’ll be pleasantly rewarded. With every successful hit, a meter at the top of the screen fills a little bit more. Fill it all the way to the end, and the music will change from a straight chiptune arrangement to a more fully fleshed out synth sound. It’s a truly satisfying reward to hear the game’s soundtrack become more “legit” as you, in turn, become more “legit” at playing it. If you play for points, entering this mode (called Multi+) is an even bigger deal, as it also increases your score multiplier (seen in the bottom right hand corner of the screen). Any combo above ten hits increases this multiplier as well, so staying in Multi+ mode while racking up huge combos is the best way to get a monster score. 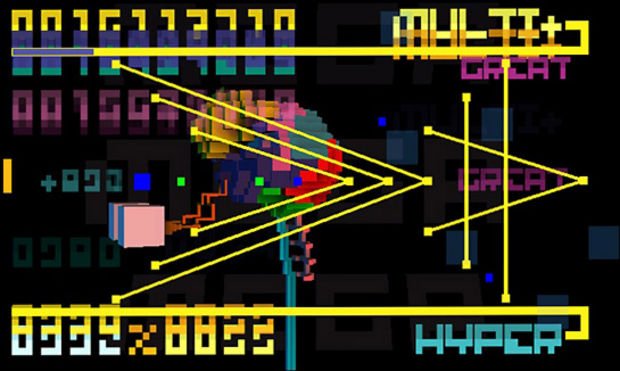 Miss too many beats, and you’ll drop out of Multi+, and back into the game’s standard “Hyper” mode. Lose more beats from there, and you enter “Nether” mode, where everything is in black and white, and the music dies completely. Suddenly being unable to see what color the incoming beats are makes it almost impossible to tell what type of beats they are. If you don’t know what kind of beats are coming at you, you won’t know what their movement patterns are, either, which makes it extremely tough to hit them with any accuracy. Losing the music also makes it harder to stay on beat, making it even harder to know where you should be at what time. Being in Nether is really a fate worse than death, which causes a genuine sense of panic as you struggle to hit enough beats to climb back into Hyper mode.

There are no checkpoints in any of the game’s three levels, so if you die, you have to start over. Seeing as each of the game’s three levels are about 15 minutes long, it can be really frustrating to die 12 minutes into a level and be forced to start over from the beginning. But since the game is so damn weird, you’ll really want to stuff that frustration down to see see what happens next. The game’s bosses are especially surprising. I don’t want to give it all away, but let’s just say that the game’s agenda to provide a new take on “paddle” gaming doesn’t stop with its boss fights. They’ll all evoke a sense of familiarity for those who’ve been playing videogames for over 25 years, but never in a way that feels cheap or forced. 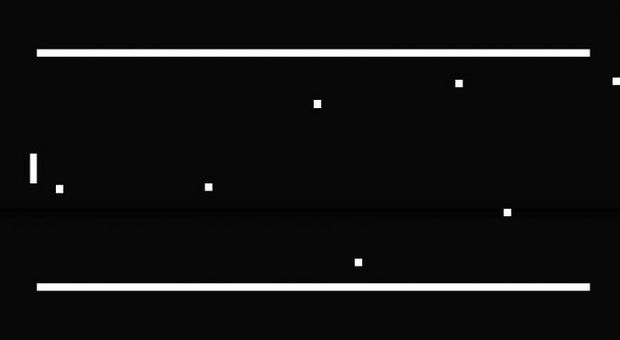 Something I didn’t realize about the game at first is that it allows for up to four-player simultaneous co-op. This is what really takes the game from being great to superb. For a lot of people, the Wii has become their “living room” console, which means that having the option to include the family in the gaming experience is a must for keeping a shared space from becoming monopolized by just one person. Bit.Trip Beat‘s gameplay turns out to be perfect for this, as co-op really does work to accentuate nearly every aspect of the game. For one, co-op can make the game less painfully difficult, but not to the point where it ever gets too easy. On the flip side, co-op can also make the game more panic-inducing. The more players there are, the smaller all the paddles become, making it harder for each individual to successfully hit beats. Also, when the game goes to black and white, good luck telling your paddles apart from each other. It’s stuff like this that makes thes the co-op work so well; it helps the game to achieve all its goals to an even greater extent, while simultaneously allowing for more people to enjoy the game at once.

While co-op is definitely one of the game’s greatest strengths, it also belies its one major design flaw. All paddles are forced to share the same movable area, causing inevitable overlaps. This causes unnecessary confusion and could have easily been fixed by staggering each player’s movable area by a few pixels. 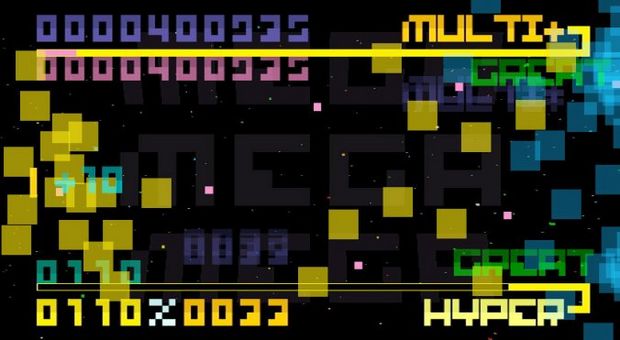 There are a few other things I could imagine people might find irritating about the game, though none of them actually bothered me. One is that in order to start at one of the game’s three levels whenever you want, you have to not only get to it, but get a high score on it as well. Personally, I thought that was a cute touch, as if the game’s designer was saying, “Only those with high scores are worth remembering,” a very old-school arcade notion. Game length might also be an issue for some. It took me over ten hours to beat the whole game, but it’s my understanding that some particularly talented paddle-jockeys have done it in about half that. People’s eyes might also get tired from playing the game, as keeping your eye on the ball(s) gives both your eyes and your brain a huge workout. Again, none of these factors were an issue for me, but others might find them bothersome.

All in all, the game is must-play for anyone studying game design and/or fans of high-pressure gameplay. Bit.Trip Beat feels like a an intentional deconstruction of videogames as a whole, with all forms of complexity stripped away in favor of delivering a simple, concentrated experience. This lack of pretense isn’t totally new; WarioWare and Shadow of the Colossus both went for it in their own ways, but never to this extreme. All hoity-toity analysis aside, the game is just really fun, filled with catchy music, interesting design decisions, and both “eureka!” and “oh shit!” moments to spare. The only people I’d advise to stay away from the game are those who hate everything about gaming pre-1985. Everyone else will find at least $6 worth of fun here.

Score: 9.0 –Superb (9s are a hallmark of excellence. There may be flaws, but they are negligible and won’t cause massive damage to what is a supreme title.)