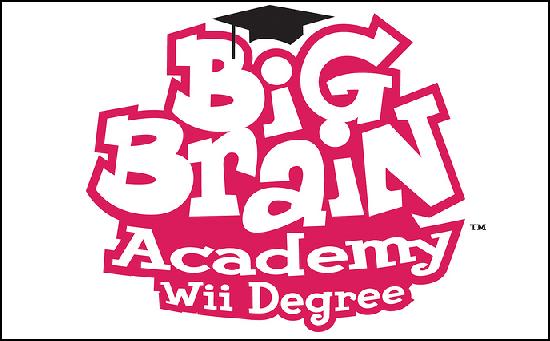 On the DS, Nintendo’s approach to attracting the “non-gamer” has worked triumphantly — games like Nintendogs and Brain Age have been huge critical and commercial hits. Even though these “Touch Generation” games are simple in presentation, they have wide appeal and instantly addictive qualities that completely warrant their almost overnight success.

Now, with Big Brain Academy: Wii Degree, Nintendo is hoping to transfer its Touch Generation success onto the Wii (a new Point Generation, if you will).

But how does the convenient pick-up-and-play feel of the Nintendo DS games transfer to the Wii? The Touch Generation games are so perfectly suited for a handheld; does Big Brain Academy possess the same casual appeal on a console?

Hit the jump for my full review and find out why I think it (surprisingly) does.

I will be the first to admit, I did not have high hopes for this game. As a huge fan of the original Big Brain Academy on the Nintendo DS, I was worried that a Wii version would be slow, boring, and only end up holding my interest for a few minutes. What was the perfect experience on a portable handheld, I thought, would not transfer well to a home console.

After starting up the game, though, I was very happy to be wrong.

Not much has changed from the Nintendo DS version of Big Brain Academy. The central experience is still intact: test yourself in five different brain-triggering categories (Identify, Memorize, Analyze, Visualize, and Compute), each composed of a small number of basic, puzzle-based mini-games, to find out the “weight” of your brain. The bigger your brain, the supposedly smarter you are! It is a simple concept that is surprisingly fun. And, once again, all of these brain measuring antics are hosted by the creepy, blob-like professor who likes to constantly award you with backhanded compliments at every chance he/she gets.

So what, then, is so appealing and different about this Wii version?

For one, and maybe most importantly, the game really takes advantage of everything the Wii has to offer and does not in any way feel like a simple port from the Nintendo DS original. This is important to note as it is one of the main reasons I enjoyed the game as much as I did. Big Brain Academy: Wii Degree really feels like it was designed from the ground up with Nintendo’s innovative console in mind. Although most of the game just involves the pointing and clicking of icons on screen, it is the little Wii-specific touches that really help the game stand out and feel ultimately original.

Take the Wiimote speaker, for instance. Throughout the game, the speaker emits a voice telling you things like what game is coming up next or how much time you have left to complete a task. The speaker even comes into play during one mini-game when you are asked to use the speaker as a phone, listening to and memorizing someone’s food order before having to remember and check off the correct items from an on-screen menu. These implementations seem almost too minute to even be appreciated, but their clever nature and surprising effectiveness while playing are a very refreshing change of pace, to say the least.

Your Miis also take front and center throughout the entire game. Not surprisingly, your Mii is your character and his/her face is plastered on every game mode you play (mainly for identification purposes or signifying it is your turn). One extra-cool thing that the game does is grab a handful of Miis from your console’s Mii Plaza and has them randomly walk around and communicate with each other within the halls of the in-game academy. As you are scrolling through menus, all of your friendly Miis are interacting in the virtual world around you. Little touches like this are sprinkled throughout the entire game and really help add to its overall appeal.

Even the simple act of pointing at the screen with the Wiimote feels tight and satisfying. Never once did my on-screen cursor experience the common “Wii blink” or have problems registering the movement of my hand. Even when the mini-games are frantic and involve quick traveling across the screen, the action constantly remained smooth. A lot of times the remarkably intuitive interface on the Wii is taken for granted; it isn’t until you realize that this kind of game could never be handled on any other console that you really come to appreciate what the Wii has to offer. Just like the original Big Brain Academy took full advantage of the strengths of the DS, the same feeling is here: that the designers really put some extra creative care into making this Wii version feel unique and extremely polished.

As you play through the brief one-player game you will most likely notice that there is a minimal amount of actual mini-games (within a half-hour I had already seen them all). Each brain category contains three separate games, bringing the grand total up to a measly 15. While the game could very much have benefited from a larger number of things to do, what it lacks in quantity it makes up for in variety (and fun). Don’t go in expecting anything on the mad genius level of Wario Ware: Smooth Moves, however. The mini-games in Big Brain Academy: Wii Degree are meant to challenge you mentally more than they are there to amaze and distract you with their off-the-wall chaos. You are never expected to go into a mini-game not knowing what to do. Instead, practicing before hand (in a very fun medal-collecting mode) is actually encouraged to make sure your test results are as accurate as possible.

And for those wondering about the level of challenge the game has to offer, don’t worry — while I was in the exact same boat, concerned that the game would be too easy to remain interesting, once I experienced one of the mini-games set on “hard” (or more impossibly, “expert!”) I quickly realized that challenge would not be an issue. Trust me, you are going to want to bone up on your fractions a lot before expecting to breeze through every mode right away (OK, as not fun as that sounded, it actually is).

Where Big Brain Academy: Wii Degree really shines, though, and what makes it an instant (albeit unlikely) classic, is with its multiplayer modes. The game offers three choices: Mind Sprint, Mental Marathon, and Brain Quiz. In Mind Sprint, you and one other person compete head-to-head in a split-screen race to see who can complete the predetermined amount of mini-games first. In Mental Marathon, up to four players work together to see how many games can be finished in a row. And finally, in Brain Quiz, up to four teams choose randomly pre-selected challenges from a board, seeing who can score the most points by completing the most mini-games in a given time.

While all three of these multiplayer modes are extremely varied (and, I can’t say it enough … fun!), what takes them to the next level is the amount of entertainment they provide in a party setting. Almost producing the same nostalgic feelings of having a board game night with friends and family, getting a group of people together to play Big Brain Academy: Wii Degree is all the more enjoyable since the game is so accessible to players of all ages. On top of that, the multiplayer modes are so well designed that they actually promote activity between real world players just as much as the characters in the game (having to separate into teams on either side of the room, passing the Wiimote back and forth, etc.). I would even go so far as to say it is the most entertaining multiplayer game since Wii Sports came out at launch, and, given the fact that the Wii is saturated with almost nothing but party games, that really says a lot.

Despite all the praise, Big Brain Academy: Wii Degree will inevitably not be for everyone. There are going to be gamers out there that refuse to give it a shot and, worse still, will hate it once they finally get their hands on it. The game is simple (graphically and gameplay-wise), I will definitely admit at least that. But if you know what you are getting into (and are a fan of all the Touch Generation DS games) this is an easy recommendation and one of the biggest surprises of the year. Big Brain Academy: Wii Degree is the perfect example of the casual gaming path Nintendo is trying to take in the future and, not since I first got my hands on a Wiimote back in November, have I felt the system’s potential and, most importantly, had this much fun.