It feels like it’s been awhile since a first-person shooter hasn’t taken itself too seriously. Constantly crawling in the dirt inside of enemy territory or navigating the gloom and doom of some alien construct can really start to feel heavy on the nerves. If there is one thing that Battlefield: Bad Company provides, it is levity in big doses.

Unfortunately, the levity does not provide an enriching experience by itself. Bad Company is a decent game, but not the great title some of us may have been expecting. The game feels as though DICE didn’t do enough with the tools it provides to the player. It may be great to laugh at the cut-scenes and exploits of the protagonists, but it’s not funny to struggle with the A.I., plot, or core mechanics of the game.

Hit the break and I’ll tell you more. 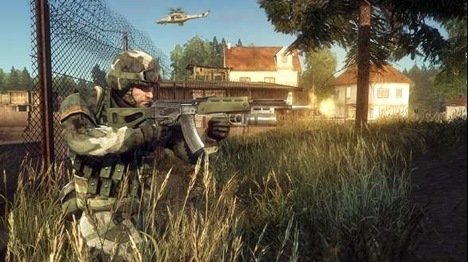 The single player mode of Battlefield: Bad Company starts with a dramatic opening, with the playable protagonist Preston Marlow lecturing over the fine details of war. The stylized, sober moment is then interrupted by a series of funny dialogue exchanges with the men of B-Company. B-Company consists of three especially rambunctious soldiers in the US Army’s doghouse. Sergeant Redford is the outspoken, ready-to-go-home leader of the group who is followed closely by the timid, talkative Sweetwater and especially dim-witted, explosive-loving Haggard. Through a voice over, Marlow explains that he has been transferred to the B-Company for a mysterious reason that is never fleshed out or fully explained. But whatever he did, Marlow explains, the army could have killed him for it.

The real story of the game revolves around B-Company’s discovery of mercenaries who carry gold on their person while fighting Russians somewhere on Earth for yet another reason that is never explained. These mercenaries are from a group called the “Legionnaires,” a powerhouse organization with the ability to take over nations and pay their troops in gold as opposed typical currency. Once B-Company gets a taste of the gold, they follow its trail to a very abrupt and poor conclusion. 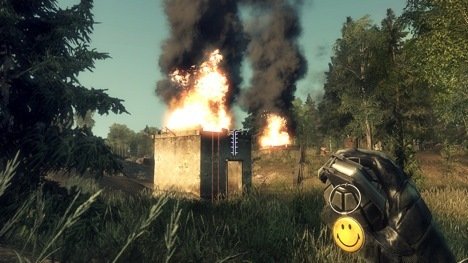 Bad Company functions like the previous incarnation of the Battlefield series. The play focuses on a player’s ability to drive and manipulate vehicles and weaponry scattered throughout the differing levels. The added twist to Bad Company is the environmental destruction. Practically everything in the game is destructible, from the trees and buildings to vehicles, fences and even garbage bags. The system works, and more importantly, the game is not necessarily guided by the ability to maim walls. At its heart, Bad Company is a shooter first, and a physics engine second.

The gunplay works well, although the hit detection is a bit questionable. I often found myself wondering if some of the animations the AI rolls through inhibits the ability to pass bullets through flesh. The AI is a bit schizophrenic to boot. Enemy soldiers will switch between being brutally adept and accurate on the field, to meek and dumbfounded at any point. This is a common phenomenon, and an odd distraction to see soldiers gleefully firing at walls or staring at the sides of a tank mere seconds after trying to take your head off. The great tradeoff in this process is that upon death, the game immediately chucks you to the last autosave point, but does not eliminate the progress made in terms of enemies killed. This is especially awesome after you spend twenty minutes killing a tank or a helicopter, just to get capped by a grunt.

There are a plethora of gadgets and guns available to boot. Laser designators, C4, rocket launchers, and power tools are all in abundance throughout the game. These support tools become a lifeline throughout the explosion happiness of Bad Company. The differing guns in the game can be found in much the same manner as everything else, as an optional “collectible.” Gold, guns, and tools are scattered throughout the large maps, awaiting careful eyes to grab them.

Like most physics-based games, Bad Company takes it a little too far in some scenarios. Trash bags and boxes have tendencies to explode violently, and the canned animations of the crumbling and flack can get redundant. There is also the added frustration of meeting an object that cannot be destroyed. This is the most apparent when driving a vehicle. The land vehicles in the game are great in concept, but possess very rigid controls. Getting stuck on the corner of a dilapidated building, or gate is commonplace. Considering that players can run over trees with reckless abandon, it is a bit disconcerting to meet a rock that a tank cannot get over. 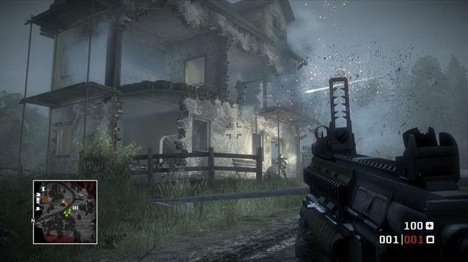 The multiplayer of Bad Company is a stable and safe affair. There are only eight maps available and only one mode of play. The object of every match is either to defend or blow up several highlighted boxes on the map. Just like the single player experience, vehicles and turrets are vitally important. As the map grows when the opposing team takes a set of objectives, getting to the next set can become a hassle on foot. The helicopter often becomes the focal point of the match because of its refined controls and nearly limitless firepower. The tanks suffer from their inability to kill much more than other vehicles.

There are five classes of characters in multiplayer.  Each has its own specificities and equipment. Despite the fact that the classes are wildly different, the nature of the spawning erases the need for two of them. Players can choose to spawn in their bases or behind a player that has progressed the furthest on the map. Spawning by another player usually means being engaged immediately in a firefight. The Recon, and Specialist classes are woefully underequipped for such a thing. Spawning in this manner, while costly, is definitely preferable than having to drive for three minutes to hit some action.

Aside from the default weaponry, players will have to unlock all the various guns in the mode either by leveling up or stroking EA’s cock. It is a bit disconcerting to boot up a game and immediately be drawn into a mailing list, then have to go to a website to get more access to guns. Thankfully, it is apparently only five weapons.

The visuals are nice with the exception of a grain filter reminiscent of Silent Hill 2. Instead of creating atmosphere and making zombie nurses scarier, it just makes my eyes hurt. The bloom from the explosives is a beautiful site to behold, and I especially enjoyed the detail work on some of the guns. Multiplayer doesn’t seem like too much of a step down from the regular game as well, which is highly refreshing.

Overall, Battlefield: Bad Company is an inspired game that stumbles over itself. The things that the title does right, it does well. Explosions are crisp, the autosaving is merciful, and the multiplayer is stable. Yet, there is a lot wrong with Bad Company. That list includes the driving, schizophrenic but miraculously expert marksman AI, plot holes you can drive a truck through, and signing your soul away for additional weapons. My suggestion is if you want a decent multiplayer experience, definitely rent Battlefield: Bad Company. If you want a single player experience, stay away.

Score: 6.0 – (Bad Company is a decent game, especially if you’re looking for a stable multiplayer experience. The problems come from the lack of multiplayer modes, ridiculously adept or dumb AI , and poor driving. Definitely give this title a rent before you buy.)