Atlus is a name that strikes delight in the heart of many a gamer, and I count myself as one of that collective. Aside from the brilliant Persona 3, Atlus has been responsible for many well-respected titles such as the Trauma Center series, Etrian Odyssey and the Shin Megami Tensei games. Of course, not every game is a gem, but it’s safe to say that when Atlus announce a title, a lot of people are awaiting the release with excitement.

Baroque was no exception, and  the complaints of many Wii owners about the lack of RPG focus on the console surely only placed it higher on people’s “do want” lists. For PS3 and 360 owners, however, the common complaint is that the game selection for the Wii can’t compete graphically against Sony and Microsoft’s consoles. If you’re a fan of Atlus, RPGs or both, you’re surely hoping Baroque is able to overcome that bias with story and gameplay, yes? I can tell you all about that.

Step into my review office, dear sirs (and ladies.)

I’m going to be straight with you here, compadres: The first twenty minutes of playing this game, I detested every second of it. I don’t know if it’s the graphical transition from recently played RPG Lost Odyssey to the clearly lesser Wii graphical capability or the fact that there’s something astoundingly awkward about everything after the opening titles, but I can say that I have rarely been bewildered by any game I have played (the last one I can remember feeling that way about was Cho Aniki, and it features exponential phalli, so it’s kind of understandable.)

For example, the training dungeon (which is NOT right in front of you in the starting area as one would assume, but rather off to the right; the main dungeon is in front of you, which you’ll likely wander into first and die in) is hosted by a lovely young man known as Coffin Man, whose catchphrase is — I shit you not — the word “goddammit.” He peppers everything he tells you with the word, including such gems as “Don’t let those goddamn monsters get too close to you” and “Making dungeons is hard, so please look forward to trying it, goddammit.” Um….is this for real? 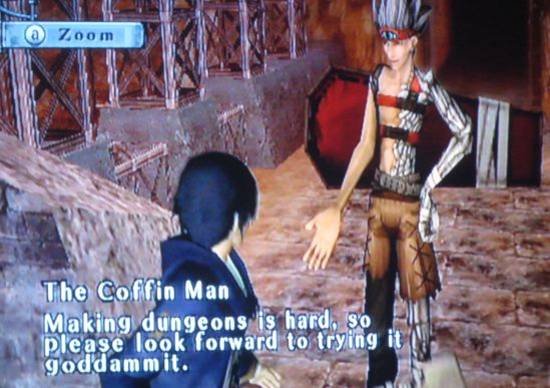 Seriously though, the game is rated Teen and while I did end up laughing eventually, I think this provides a weird sticking point that would likely offend religious parents who bought this game for their children. It’s not just that he says the word once, it’s his almost determined consistency of use that makes me envision a schoolteacher mom with steam pouring out of her ears. Not to mention, it’s the most awkward thing I’ve seen since the general reaction to Duel Love.

So, the story of Baroque begins with you not being able to remember the story. You apparently have amnesia, although no one tells you that word for word, which is something you’ll want to get used to. The people that populate the Outer World where you begin the game are some of the most vague bastards you will ever have the misfortune of meeting. It’s a shame, because the character design is interesting, but either poor localization or just plain poor dialogue writing is mad at work here. The Horned Girl from some of the screenshots you’ve seen in the past is possibly the worst. I’ve seen better acting in Ishtar.

Anyway, the title Baroque is actually a word derived from the Portuguese word “barroco” which refers to “distorted fantasies.”  The beings you meet are clinging to their Baroques in order to survive, which helps to explain a bit of why things are so damn weird around here. There’s also some business about a bunch of zealots called the Order of Malkuth, a tragedy called The Blaze, and a process called Idea Sephirah, which sounds a little like Sephiroth and daydreams reformulated. If it sounds confusing now, it’s twice as much so when you’re actually playing it. 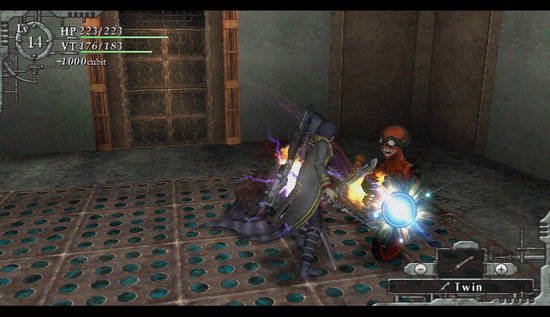 A quick word on the Wiimote and Nunchuk versus the Classic Controller: Being the old-fashioned type that I am, when I play a Wii game I go straight for the Classic Controller most of the time unless it’s a title like Wii Sports. I played Baroque both ways, and both are just fine — neither outweighs the other in ease. Using the Wiimote takes more effort as sword use has been paired with waggle, but I actually felt the Wiimote and Nunchuk were a tad more intuitive and easy to use than the Classic controller, so use that info as you will.

The overall feel of the combat is decidedly Roguelike, so if your taste leans towards JRPGs, you may find yourself saying, “Is this it?” Yep, pretty much. You more or less kill stuff, find items, and talk to figments of Dave McKean’s imagination in a vain effort to grasp the storyline. Once you get down there, though, the appeal of the grind kind of hits and you find yourself kind of enjoying that portion of Baroque. Or at least, I did, before I died and found myself in the Outer World again with all my items gone and back to level one. Yep, that’s what happens when you die. Swell.

The other thing that happens when you die, however, is that the story progresses. This is probably one of the most interesting things about Baroque, and while I wish the story had been a little bit less cloudy, this feature still stood out as a great idea.  The atmosphere gets decidedly darker as you make your way down through the levels, and the creature design is neat, especially if you’re into horror and such. After getting far enough down there, I almost forgot the goddammit business had even happened. Almost.

I feel I should mention that there is a way to save items, so after you die and are fully stripped of everything you worked so hard to gain that you can go and grab a few of those items to start again with. Apparently you can throw items into Consciousness Orbs that you come across while in Neuro Tower and they will transfer to the kid in the Outer World who will hold things for you. The game NEVER tells you this clearly, and it was only after I read the instruction manual that I understood how this worked. Counter-intuitive doesn’t really begin to describe this game. 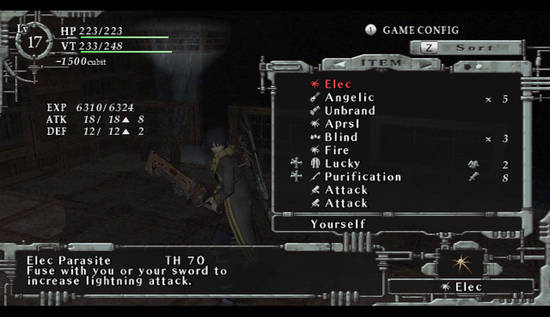 Sounds fun, huh? I wanted so much to love this game, as I often raved about it in posts before it was released. Although the older-looking graphics would be easy to blame, Baroque‘s worst crime is its oddy blurry intentions — I felt like I still didn’t really know what was going on until the very end, but instead of being masterfully handled in the process, I was kind of fumbled instead. Sometimes being fumbled is good, but, you know, not always. I can’t speak for the PS2 version, but I can say that unless you are a hardcore Atlus collector or dungeon crawling obsessee, you’d be best off saving your money for something a little more compelling.

Score: 4.0 – (Poor. An admirable effort with a sliver of promise, but essentially mediocre.)