Rare is a developer that I desperately want to see flourish again. I know they have it in them to make great games, but these days, they always seem to get something wrong. When they announced that they were changing the new Banjo-Kazooie’s formula to vehicle creation, I figured that would be the wrench thrown into the works of this particular game.

As a huge fan of the original Banjo-Kazooie, I remained hopeful and was excited enough to download and play the demo right away. I found myself entranced by the game’s visuals and audio, but frustrated by the shoddy controls of the vehicles and the game’s apparent dependence on them. I tried very hard to enjoy the game in its entirety, but I just couldn’t. But this was not the end of the story for Banjo-Kazooie: Nuts & Bolts and I. Regardless of everything that had happened in the past, I soon found myself at a checkout, exchanging my money for the full version.

Now that I have clocked in around ten hours with Nuts & Bolts, have my feelings changed? Are the vehicles as bad as everyone thought they would be? Are there still a zillion little doodads lying around that you have to find? I’ll tell you the answers you are looking for, but it’ll cost you a hundred Musical Notes.

Banjo-Kazooie: Nuts & Bolts‘ story begins with a visit to Spiral Mountain, where Banjo and Kazooie are both a little out of shape after eight years of peace. They are visited by the Pong-faced Lord of Games, who whisks them away to his videogame factory headquarters to do battle with a re-animated Gruntilda for the ownership of Spiral Mountain.

The game’s silly storyline is only the beginning of Rare’s trademark sense of humor. From the giant trash can that is filled with copies of Grabbed by the Ghoulies, to the comical way in which Bottles the Mole’s eyes always stay in his glasses even when they’re knocked off his face, the developers’ wonderful sense of humor shines out of the game’s every orifice. It is likely to be one of the elements of the game that will keep you playing above all others.

The other thing that may keep you playing is the fact that the game is actually fun. As I got further and further into it, it got harder for me to believe that I had disliked the demo so much. Things have definitely been tightened up for the retail release of the game, and I want that to be known right away. Many people were turned off by the same things that I was, and while they weren’t completely fixed, the game feels like it is much more playable now. 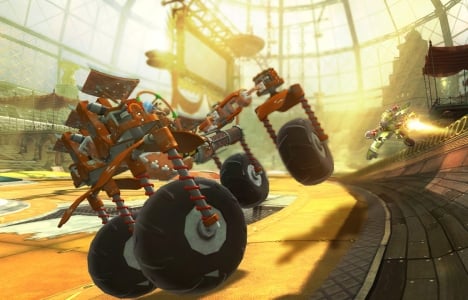 Nuts & Bolts is a collect-a-thon, but in a slightly different way than its predecessors. Everything that you find has some sort of use, which makes the collecting feel much less like a meaningless chore. Jiggies are still used to get into new worlds, Musical Notes are now used as currency, and Mumbo Crates contain new parts to build vehicles with. A lot of the collecting is optional, and in the case of vehicle parts, you will be able to use the same part on all of your blueprints, so you are not forced into searching for duplicates.

The time that you spend outside of a vehicle is about what you would expect from a Banjo title. You are able to run, climb, and swim through the vast worlds that the game takes place in. Kazooie is still used to attack, but she has not retained her special moves over the years. Instead, she is given a magical wrench to bash enemies with. For what it’s worth, it works well enough, but the game is obviously not based on combat. You will use the wrench to pick up items and activate Jiggy vending machines more often than you will use it to maim anything. With the exception of climbing (you don’t grab onto poles or ladders as easily as you should) and the sometimes faulty camera, the platforming is pretty solid.

While you can get around on your own, driving will quickly become second nature to you because of all the time you will be spending behind the wheel. All of the worlds you will visit are made to be traversed by machine, and all of the Jiggy challenges are all done in vehicles. Many of them will force you into making quick trips to the Garage to cook up something that will work best for the task that lies ahead. The creation system is so simple to work with that it is in no way a hindrance, and it never gets old or feels like a chore to build. In fact, the feeling is quite the inverse. 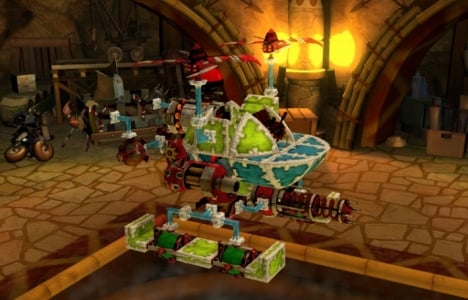 I am not usually one to enjoy building things in video games, so I surprised myself when I spent a lot more time building and testing vehicles than I did playing the rest of the game. Nuts & Bolts‘ vehicle creation has been compared to that of the Gummi Ship Workshop in Kingdom Hearts, but the similarities end at their building block systems. Mumbo’s Garage is much deeper and a whole lot more fun. Parts can easily be looked through, slapped on, and moved around your workstation. Outside of challenges, you always have the ability to transport yourself to the Garage while in the different game worlds by holding up on the D-pad, making it easy to quickly stick whatever part you may need or want onto what you’re driving. You can also choose from any of your saved blueprints from the start menu to switch vehicles entirely.

The controls definitely feel better now than they did in the demo, but there are still some problems with driving. Many times, after I had tweaked a vehicle extensively until it ran well on the testing grounds, the controls would somehow become horrendous once it was taken out into the real game. Driving in reverse still feels a little off as well, and it is sure to mess you up at least a few times during challenges.

Another negative point is that it can be difficult to hit anything with some of the weapons that you can attach to your vehicles, especially if you want to keep moving as you shoot. They cannot be aimed, nor is there even a crosshair to let you see where your shots will end up going. You can get along well enough without weapons most of the time, but for Jiggies that require you to move around quickly and fight off hordes of enemies, you’re better off hopping out of your car and trying to chase them down with your wrench if you don’t have any of the better guns. Overall, the driving is okay, but it will ruin your good times on occasion. You will sometimes have to give up on a challenge and just move on to save yourself some frustration. 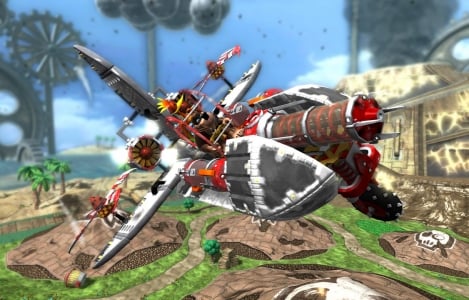 You will quickly learn that vehicles that are built better control better. The more time your spend in the Garage, the less you will experience vehicles that handle horribly. It takes work and thorough testing to get something that will not flip over every two seconds or run in circles involuntarily. Those who feel like they would be too lazy to spend a lot of time building do have a ton of pre-made blueprints and half-built vehicles to choose from. However, it might be a little hard to win anything with the defaults that you are given. If you’re not willing to put any work into it, don’t be surprised if you find yourself unable to win Jiggies.

There are plenty of other things that the game has to offer besides collecting golden puzzle pieces, such as a ton of multiplayer modes that can be played locally or over Live. The games are split into two categories: races and “sports” games. Races are pretty much the same thing that you will run into several times during single-player. Sports range from very fun (flinging your vehicle into the air to hit targets on the ground in a game of human darts) to horrible (a deathmatch reliant on inaccurate weapons). There are also a ton of side-quests and games tucked into the single-player game’s central hub world (check out Klungo’s Arcade, you will not be disappointed). Even if you feel like you will not replay the game after your initial play-through, you will feel as though you got your money’s worth out of it. The game’s length is further extended by all the time that will inevitably be spent in the Garage. 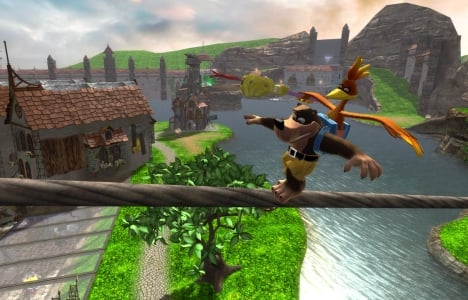 I went into Nuts & Bolts a skeptic, but soon found myself loving what the game has to offer. It has its flaws, but it is a fun, silly platformer/racing game hybrid, and a welcome break from the numerous other serious fall releases. At only $39.99, it can be had for a much cheaper price as well. I believe that this game can stand alongside the Viva Piñata series as a step in the right direction for Rare. But it still may not be for everyone, especially the fans of the older games who are dead-set on wanting a straight platformer out of this title. Regardless of how you feel about the game, give Nuts & Bolts a rent, and who knows — you may end up purchasing the game with the desire to see it to the end, and then some.