Before I brewed my cup of coffee this morning, I listened to the sounds of my two cats playing with their toys, my girlfriend grumbling about having to go to work, and rain drops. My cats’ paws thumped on the floor sporadically; however, my woman’s grumbles and the rain’s wet pats had a certain rhythm. When the coffee maker started to make its cacophony, it ruined my moment of auditory enlightenment.

The introduction to this Audiball review is the reason I listened to the sound of my immediate environment at dawn. Usually, I just make my coffee, stumble to my computer and check my e-mail. I never take the time to listen. Audiball is an XNA puzzle game that I assumed would use sound in a meaningful way. I opened my ears this morning just as I did while playing the indie title. 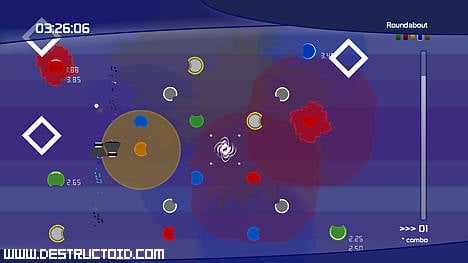 Audiball is an odd game.

Picture playing Rock Band without music. Every time you clack out a note, the game would register it just as it would have with sound. This may seem unsatisfactory — music is a part of the experience — yet, you’re playing the game properly. At its core, a rhythm game like Rock Band is nothing more than a practice in precise timing and muscle memory.

Unlike Rock Band, Audiball doesn’t feature floating notes or complex solos. It’s a puzzle game that suggests the use of a plastic guitar. Weak sound feedback never lulls you into believing that you’re creating music, but the game’s utilization of muscle memory and precise timing may make you think you’re exploring a mute Rock Band with a puzzle twist.

And the game keeps up with the rhythm façade. You’re put in control of multiple fret-colored turrets that work together to propel tiny white orbs to a galaxy-shaped endpoint. Flipping the strum bar (or hitting the correct color-coordinated button) shoots the ball to another turret, at which point you’ll need to propel the ball once again. It’s a relay race (time limit included) that challenges your ability to pick the right buttons in rapid succession. 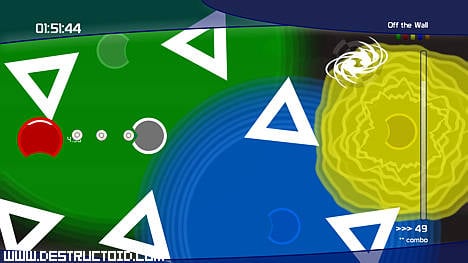 Each level takes around 2-4 minutes to complete, thus forcing you to shoot several balls into different turrets simultaneously. A second timer forces you to dump their payload within a matter of seconds. These acts balance each other quite well, and I find it to be a satisfying dynamic, although I question the pacing. Some levels require too much deftness and pattern memorization.

Obstacles (including odd physics-based ones) rotate and slide in the way of the balls’ progress to the endpoint. These barriers aren’t always bad — many of the game’s levels are built upon the interplay between the balls, turrets, and obstacles.

That interplay doesn’t always birth something ingenious. A few levels suffer from being too clotted by turrets and barriers. These levels cause frame rate meltdowns and a fair bit of frustration. But the majority of the game is full of satisfying puzzles that require an intelligent approach. The last level, “Wave Rider,” is perhaps the most striking example of good design coupled with decent puzzle gameplay. 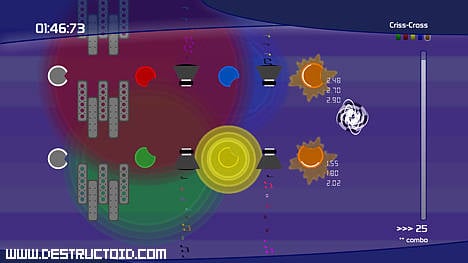 The soundtrack is a clever mixture of tracks with an upbeat swing. Neither repetitive nor distracting, the songs and sounds of the game add to the experience. Yet, I was thrown by how they simply didn’t matter to the game. Audiball is the same game when muted, whereas other rhythm mixtures seem hollow without.

Audiball is a competent puzzle game with a refreshing style. Its uninspired visuals, breakneck speed, and occasionally cluttered levels made me quit playing for lengths of time. Its problems are triumphed by its victories — the large amount of good levels, challenging puzzles, and decent playing time are factors that not every XNA game possesses. For 200 Microsoft Points, it’s hard to find a reason not to buy this game if you’re a puzzle fanatic armed with a plastic peripheral.