Let’s face it — original titles on Xbox Live Arcade tend not to be, shall we say, very good? Sure, there are a few decent entries like Pac-Man: Championship Edition and Bomberman Live, but XBLA’s original games are more often the caliber of such captivating titles as Bliss Island, Space Giraffe and Yaris.

Assault Heroes, by all accounts, falls into the “decent” category. I only played the trial but it looked like some good, honest, shoot-everything-that-moves fun. Really, with a run-and-gun game, it’s hard to provide a title that isn’t at least worthy of a few minutes of simple enjoyment, and Assault Heroes certainly provided that.

Enough gamers out there seem to agree, because Sierra last week released a sequel, and since I got a review code, I better go ahead and review it. So, hit the jump to see if this shoot ’em all sequel is worth your precious points. 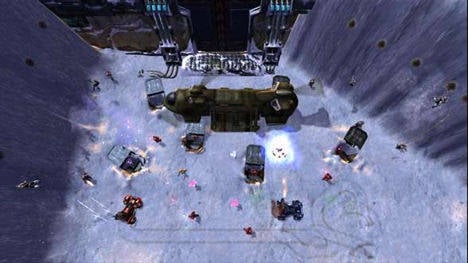 Assault Heroes 2 is full of enemies that might be aliens or might be something else entirely. Does it matter? Not really, because this is a shooter — bullets first, details later. All you need to know is that you have a massive gun and a cool car, and everything needs to die. That’s gaming brought back to its roots.

The aforementioned cool car is Assault Heroes‘ own special gimmick. Rather than be a purely Smash TV-esque run-and-gun, you start the game in a vehicle that not only enhances your firepower, but acts as a sort of shield. If your vehicle’s destroyed, you don’t die, but are stuck on foot in a far less powerful and vulnerable state. Your car will re-appear after a given time, but you need to survive until it does. Not only does this make the game feel pretty tense at times, but also far more forgiving than other games of the genre. 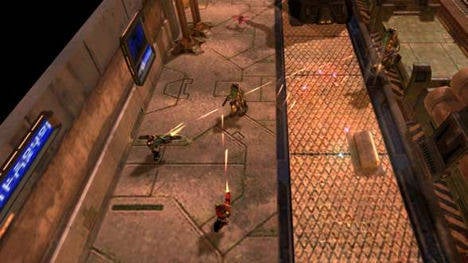 All this you’d know if you’d played the original, but Assault Heroes 2 mixes things up by providing more vehicles to play with. During the game, you will find three other types of “hijackable” machines — a tank, a helicopter and a mech-like walker. Hijacking is as simple as walking into an unoccupied vehicle, and then you can turn the enemy’s own firepower against it. While it’s pretty fun to deal death in a massive armored tank, I must say that your starting vehicle is the more enjoyable to use, and you will likely find that you ignore opportunities to use other types of craft since they lack the versatility and efficiency of your starting vehicle.

As far as the meat of the gameplay goes, just looking at screenshots will tell you what to expect. It’s a run-and-gun shooter with old-school sensibilities, despite the gimmicks, and it doesn’t pretend to be anything more than the points-based arcade blaster that it is. While it can drag a little for single-player, there is, of course, a co-op mode to keep things interesting. It’s the kind of game that, as I alluded earlier, is very difficult to get wrong and should provide some thoughtless entertainment to anybody whose gaming collection lacks Barbie Horse Adventure.

The game looks pretty good as far as XBLA titles go, with some impressive backdrops that take you from an icy wasteland to an exotic jungle and outer space, but it’s the ridiculous bosses that steal the show. Giant scorpions and insect/King Kong hybrids dwarf your little vehicle and can put up some stern resistance until you get their attack patterns down. They all look great, too, in a rather silly way. In fact, Assault Heroes 2 is quite silly indeed, and doesn’t take itself seriously, whether it’s throwing dinosaur-riding gunslingers at you, or sending wailing suicide bombers from every corner of the screen. 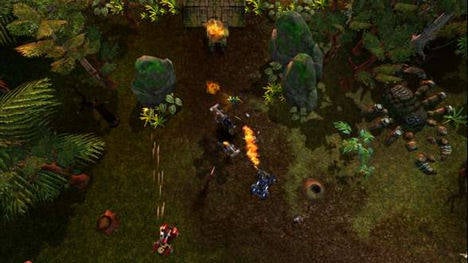 There is honestly very little to dislike in Assault Heroes 2, though hardcore shooter fans will likely find it not challenging enough to satisfy their masochistic urges. Getting out of vehicles can be a bit of a pain as well, because you can be sure that your character will exit from an inconvenient side and have to walk around the craft, lest he get back in it. Also, despite the fact that you can scroll through four different weapons, including an ice blast, a flamethrower and missiles, I found that, generally speaking, the standard minigun was the only truly useful one.

Ultimately, though, Assault Heroes 2 is a great little game for shooting fans in need of fresh distractions. It might not be as epic or challenging as Ikaruga, and it may lack the hardcore appeal of Contra, but it’s got its place and is a good introduction for newcomers to the venerable genre. The only problem is the fact that, as an XBLA title, it’s a committed purchase, and one that will set you back 800 points, making it difficult to recommend to everyone. If you can’t get enough shooters, then definitely snap this one up. It’s also a good buy for anybody who wants to get into the genre, but is intimidated by the more hardcore titles out there. Everyone else, I definitely suggest you take the trial out for a run.

For 800 points, you could certainly do worse. You can’t really do much better, either. 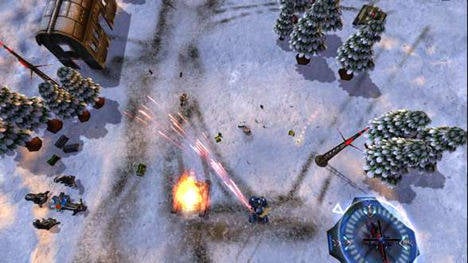 Score: 7.0 (Good – Replayable, fun, but nothing innovative or amazing. The game potentially has large flaws that, while they don’t make the game bad, prevent it from being as good as it could be)

[Don’t forget to check out RetroforceGO! for all your Xbox Live Arcade and Virtual Console discussion. Also, I know there’s no “Buy It!” or “Rent It!” label for this review. Frankly, how is that going to bloody work for this?]