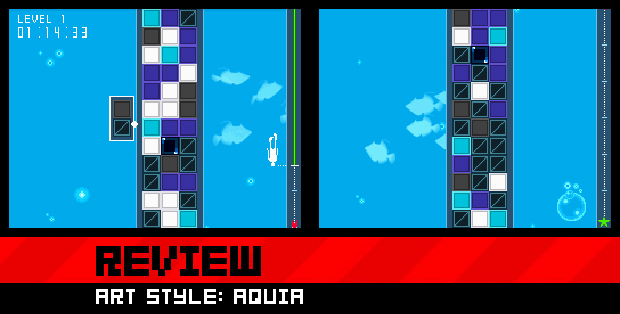 There was a point in my life when I was sure I’d never see a truly new “color matching” puzzle game ever again. This was around the time that Snood got immensely popular, despite the fact that it was a beat-for-beat rip off of Puzzle Bobble/Bust-A-Move. I only got more worried when Puzzle Quest made it so big, as to me, that game is just Bejeweled with level grinding. Art Style: AQUIA

proves my past pessimism wrong. The game’s suffocation-prevention premise, multiple control handles, and high pressure boss battles are all unlike anything I’ve seen in a puzzle game before. Do these fresh ideas make the game worth playing, or are Art Style: AQUIA‘s new beats merely half-baked attempts at innovation? Hit the jump to find out.

Ok, so maybe I exaggerated a bit about how truly new Art Style: AQUIA’s is. At its core, the game is firmly planted in the Planet Puzzle League jigsaw-shifting, color-matching subset of puzzle games. That said, Art Style: AQUIA does do a lot of weird stuff. It’s definitely different, which may or may not be a turn off to you, depending on your tastes.

In Art Style: AQUIA, you play the part of a deep sea diver’s oxygen tank. Weird, right? On the far left side of the screen is the diver, slowly swimming towards the ocean floor. Your job is to constantly work towards connecting three blocks of the same color in the game’s playable area. Every time you do, the diver gets more oxygen, which helps him to swim faster; it also keeps him from blacking out. When the diver gets to the bottom, you have to reconnect a set of blocks so that they form a specific shape. Take too long, and your diver drowns.

It’s this death-by-drowning thing that really makes Art Style: AQUIA stand out. Just about every puzzle game involves some sort of slow, gradual march towards death: as the blocks/bubbles/snoods/animals/cookies/whatever you’re stacking or matching at the time move ever closer to the “dead zone,” usually the top or the bottom of the screen. In Art Style: AQUIA, the dead zone doesn’t show up until you’ve started to run out of oxygen, which happens almost immediately on the tougher difficulty levels. As your diver’s brain starts to shut down, the top of the screen starts to turn black. When the black reaches the bottom of the screen, you’re dead.

This requires the player to be constantly creating color-colliding combos while keeping track of the precise location of all blocks on screen. You will have to work in the “blackout” space, the space that the “dead zone” has already taken over, on a regular basis in order to survive. This works to increase the difficulty and invoke a sense of panic in a way that’s unique to the game’s deep sea diver scenario. The only way to completely get rid of creeping, black death is to connect three special “oxygen blocks.” In order to get these special blocks to appear, one must (you guessed it) connect tons of regular blocks of the same color, preferably in combos.

Even for Puzzle League veterans, that will be no easy task. Art Style: AQUIA may be a jigsaw puzzler like Puzzle League, but it works on a totally different mechanism. You can only move blocks by first punching them out of the playing field, and only connect blocks by punching them back in again. It’s a tough thing to explain in words, but hopefully it’s sufficient to say that the game requires its own way of thinking. Just like how Marvel Vs. Capcom experience will help you to get into Guilty Gear, knowing Puzzle League will definitely give you a head start in wrapping your head around Art Style: AQUIA — but in order to really get anywhere in the game, you’ll more or less need to learn a whole new set of skills.

The game consists of ten levels of ever-increasing difficulty, as well as an “endless” mode. There are also three different shapes you can “play” as (horizontal rectangle, vertical rectangle, and square), which goes a long way to providing the game with some longevity. Strategies that work with the horizontal rectangle won’t work with the other shapes, and vice versa. Going back to the MvC analogy, using the different shapes in Art Style: AQUIA is a lot like using different characters in a fighting game. It’s pretty surprising how differently the game plays depending on which shape you choose.

All of the game’s levels are available from the start. The thing you’re actually playing for is the goal to unlock different in-game “Aquariums”; there are twenty-five in all. Each unlock provides you with a new oceanic animal to gaze at. As with all the visuals in the game, these fish, turtles, and manatees seem like they were made to relax the player, which is strange, seeing as how the game’s actual gameplay is so tense and scary most of the time. The music is also relaxing as hell. It’s a series of ambient sounds that work in conjunction with the game’s sound effects in a way that reminded me a lot of Electroplankton. Each time you punch a set of blocks, it lets off a tone like a wind chime. Connect some same-colored blocks together and you get two wind chimes. Set off a chain reaction, and you get a whole damn symphony of chimes.

For a lot of people, Art Style:AQUIA will probably come off as a little too different for its own good. It’s a tough game to get used to, even for old-time puzzle game fans like myself. Personally, I found all the new stuff the game provides to be fresh and interesting, and while later levels in the game are almost unfair in their difficulty, I enjoyed playing the game enough to keep going even after things got punishing. I still haven’t managed to beat the last couple of levels with the horizontal shape, but I plan to keep trying.

If you are up for a puzzle game challenge or just interested in seeing an alternative take on the classic “match three” puzzle game design, Art Style:AQUIA will be more than worth your five bucks. The game is far from perfect, but it’s interesting, and I feel like I better understand the puzzle genre as a whole for having played it.