Aw. let’s cut right to it. No introductory paragraph today. I’ll just get to what I want to tell you: Archibald’s Adventures is a badass little game.

You may have heard of this game before, as it has shown its big-nosed face on several other platforms, including PC and Mac. But the game is right at home here on the iPhone and iPod touch, and there’s a lot to like about this portable version.

You play as Archibald, a show-off skateboarder who hits the big ramps only to find himself falling into a hole in the ground and right inside a crazy professor/inventor’s mansion/dungeon. Your only job is to find a way out, and your only tool (at first) is your skateboard.

After boot up, the first thing we did was scroll through the pages of levels in Archibald’s Adventure. This game is huge for an iPhone game! And we like that the game has been cut up into little bite-sized levels, perfect for on-the-go gamers. In all, there’s over 100 levels of puzzle platforming here.

The first few levels help you get acclimated to the controls and game play mechanics. You’ll hold your thumb or finger down on an on-screen d-pad, controlling Archibald’s movements and jumps on his trusty skateboard as he avoids traps and makes nearly impossible jumps. We’re pleased to say that this control scheme worked out better than expected, and we loved the ability to move this virtual directional pad anywhere on the screen. Unfortunately, you can’t shake the underlying feeling that it’s easy to blame this control scheme when things go wrong. But that’s not the game’s fault at all. If you think more about the timing of your virtual d-pad presses, things become a bit easier. For the most part, the control is great. 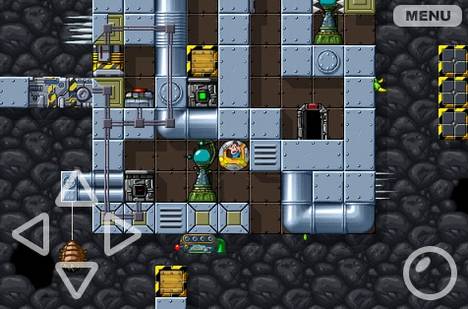 After the training levels, you’ll set out on your own, pushing through a series of action puzzles of increasing difficulty. The puzzles range from kicking over a few switches to open a door, to making crazy jumps off walls, avoiding spikes and other deadly obstacles. You will get stuck as the game progresses, but again, that has nothing to do with the control scheme and everything to do with your brain power. The game slowly adds a few more game play mechanics and control methods to keep the puzzle solving fresh.

Archibald’s Adventures looks great on the iPhone. The art and images are crisp, bright, and fresh, and the animation is smooth. Both the art and the animations for it get pretty intricate in the later stages, but the resolution is high enough that it’s still all easy to appreciate. The sound and music aren’t anything special, but they do the job well enough. We think you’ll be too busy figuring out puzzles to worry about that anyway. 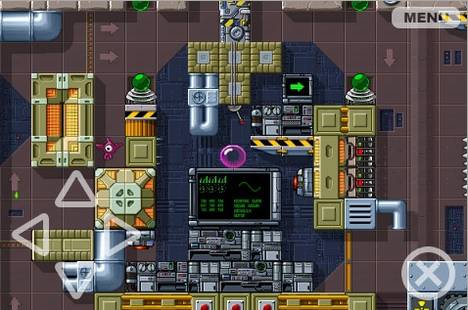 Good luck with this one!

There’s nothing terribly complex or fancy about Archibald’s Adventures. It’s just a purely enjoyable game, and the first we’ve really enjoyed on the device since we reviewed another platformer, Rolando. If the control is done right, puzzle platforming just seems to fit for the iPhone and iPod Touch. They’ve nailed it here with Archibald’s Adventure, a fun little game that’s really not little at all. And at a lowered price of $4.99, you’re getting a ton of game for a tiny bit of money. Recommended.