I think Arcana Heart was marketed the wrong way. No offense, Atlus, but this game deserves more. I could see how this title would be well served marketed as “Japan in a box,” with its moe, loli gals, magical transformations, silly cutscenes, and anime opening. And I could see how your typical Japanophile might be drawn to this title, fighting game fan or not. But underneath all the fluff is a fighting game with qualities that would appeal to the die-hard fan of the genre. If anything, the marketing should have tried to appeal to both fans of big-breasted 14-year-olds and 50-hit combos.

The question is, does Arcana Heart have enough substance beyond the short skirts and big eyes for diehard fans of fighting games? And if so, how does it rank among the countless other fighting titles on their shelves?

Examu’s Arcana Heart isn’t even close to the first thing you’d think of when mentioning fighting games. But, the 2D all-girl brawler does have a bit of a following in Japanese arcades. Atlus brought over both the original Arcana Heart and the patched/balanced Arcana Heart Full! in this $29.99 package.

In this game you fight as one of eleven girls, most of which are in their pre-teens or early teens. They might all go to the same school, but each has their own distinct moves and abilities. They range from the loving redhead Heart Aino to the part-demon rollerblading blonde Lilicia Felchenerow. There’s also a shrine girl, a dog girl, a young samurai, the obligatory big-breasted fighter (a robot, apparently), and even school swimsuit-wearing 5th grade girl that wants to take over the world. Did I mention that this 5th grader fights suspended in a large blob of water?

These girls have the ability to communicate with the Arcana, and their ability is needed to save the world. Of course. The story sucks, but they’re never good with fighting games anyway. I think all of the work went into the gameplay, and I’m okay with that. 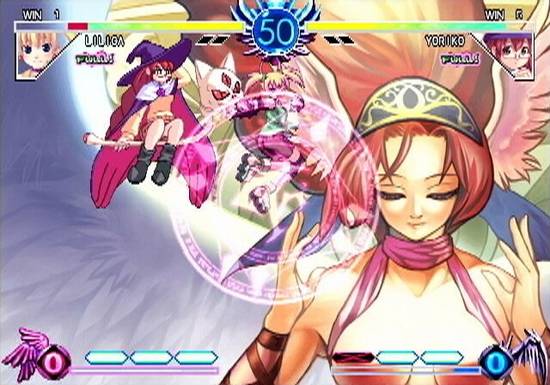 Their ability to summon these Arcana deities is what makes Arcana Heart a bit different from your typical fighter. When you select your fighter, you also get to select any one of several Arcana. These can be summoned in battle to assist the fighters in various ways, and their strongest attack, the Arcana Blaze, is usually a high-damage spectacle. These Arcana also grant the player special attacks beyond their default set. I spent countless hours playing with different combinations of fighter and Arcana, and I’m sure I didn’t cover half the possibilities. There’s endless replay value here.

Arcana Heart’s fighting system might seem simple at first glance. There are buttons for weak, medium, and strong attacks, and directional control and position vary the type of attack for each button press. A press of all three buttons unleashes “Arcana Force,” the gateway to your ultimate “Arcana Blaze” attack. There’s also a “special” or “S” button, which has several uses. With proper directional movements, the S button sets off special attacks that vary with the type of Arcana chosen. It also acts as a homing button; when there’s a gap between you and your opponent, one press will sending you flying in their direction. You can also use it to cancel an attack immediately, opening up multiple opportunities for combos and corrections.

Four-button fighting may sound simple, but there’s quite a learning curve to overcome. Between the Arcana system and the homing/homing cancel abilities, there’s an amazingly complex chunk of gameplay to take in. Sweeping controller moves and button presses are not enough to combat the computer’s insane air combos. Unless you learn how to defend/protect yourself, expect to be popped up into the stratosphere and hit all the way back down to the earth. Learning how to effectively use the system is a bit of a hump to get over. I will say that once you’re scooping enemies into the air and hitting them a couple of dozen times before they land, you’ll be hooked with this impressively deep fighting system.

The good news with Arcana Heart is that it looks as good as it plays; it easily ranks among the best-looking PlayStation 2 2D titles. The bright, crisp hand-drawn sprites looked amazing on everything from a small 14″ LCD to a 60″ HDTV. While the character types are all rehashes of ones we’ve seen before, they’re all drawn well, and many provide unexpected animations and features you won’t initially expect. I won’t ruin the surprise. The character animations are mostly fluid, and often impressive. I’m willing to bet you’ll lose to the water blob girl Kira Daidohji in the first couple of times you fight against her; the animations for her glob of water are impressive enough to distract. 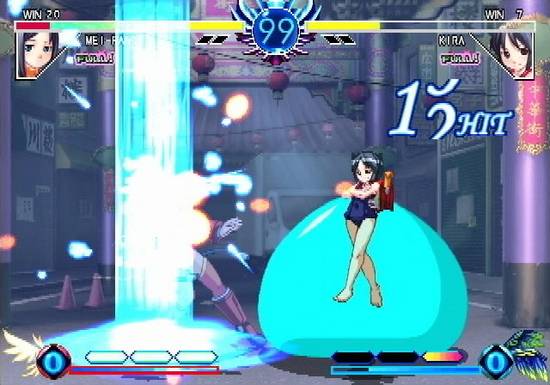 It needs to be said that there is a fairly steep learning curve in Arcana Heart. There are only 11 characters, but their control styles are so varied that each can be viewed as their own individual challenge to overcome. I’ll say that the first part of the review process was incredibly frustrating. Some of the higher level fighters posed enough of a challenge to have me scratching my head…  and eventually yelling at the television. It did force me to re-examine my fighting methods, and I did finally succeed, but it definitely wasn’t easy. The final boss in Story Mode had me gritting my teeth, hitting continue countless times. I’d go as far as to warn to the casual fighting game fan against an impulse purchase, as Arcana Heart may be to difficult for “quick fix” gaming.

In the end, I’d say that Arcana Heart is not recommended for the type of gamer it seemed to be marketed to. I think they’d become frusturated no matter how cute the girls are. Arcana Heart is like a wolf in a very moe sheep’s clothing. It may look like a silly anime girl brawler, but the underlying complex fighting system can provide a challenge to even the most seasoned fighting game fan. If you’ve got the fighting game chops, overlook the underaged girls (I don’t say that everyday!) and give this one a chance.