The Afro Samurai anime has its charms. The bent characters, copious amounts of stylized violence and decent narrative kept me moving from episode to episode. I usually don’t enjoy watching “cartoon” movies. I’m the kind of guy that likes his action or plot to be moved by real people, doing fake things in front of a green screen.

When I heard that Namco Bandai’s new Surge label was developing an Afro Samurai videogame, I got excited. Killing hordes of unworthy opponents and fighting quirky big baddies for the sacred Number 2 headband seems like the perfect setup for a brawler-type experience.

But not everything works out the way we envision it. Hit the break for the review. 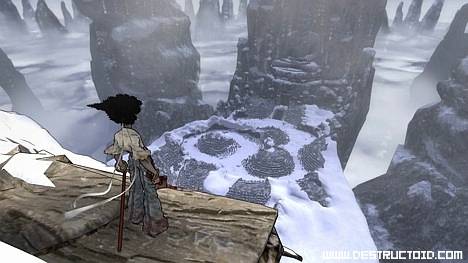 Surge’s Afro Samurai possesses the same teeth-grinding, crimson- and gore-letting action as the anime series. It capitalizes on the revenge story — and its many digressions — of the first season. To the unaware, the game will seem like a trip — the over-the-top brawler action, quasi-feudal Japanese setting and haphazard plot elements are confusing without proper context. To those initiated by the anime, Afro Samurai may seem like a Cliffs Notes version with a few missing pages. Important plot details are often discarded entirely or jammed into the back ends of unrelated cut-scenes.

My favorite thing about the game is easily its visual flair. The cel-shaded world is predominantly gorgeous — the environments, backdrops and character models are rife with color and detail. Yet, the most striking thing for me is the game’s focus on gore. Blood spurts, shoots and pours out of victims as their limbs go flying across the screen. Every new kill leaves another messy splatter on the floor and your screen. Nothing pumps me up for another round of enemy annihilation like seeing the evidence of my previous dirty work. 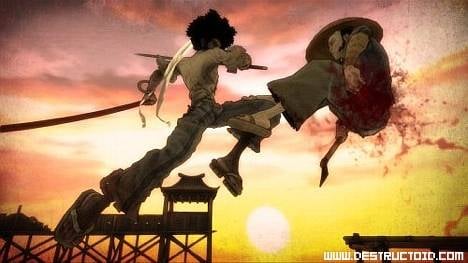 And plenty of blood is spilt while playing Afro Samurai. The more base brawler mechanics are present and accounted for. The game focuses on your ability to maneuver through hordes of enemies with a variation of fighting combinations and focus attacks. Combinations (a mixture of kicking and slicing with Afro’s sword) propel you toward enemies — almost like an auto-lock missile controlled by the face buttons. Focus attacks act as a bullet-time mechanism. They slow down the action and allow you to pick out a face in the crowd and deliver a serious blow.

You gain focus by defeating enemies with standard combination-based attacks. There isn’t a HUD, so you’ll have to rely on watching Afro to determine if you can unleash a serious beating. A small jewel gradually lights up when enough murdering has been accomplished to activate the power. The lack of a HUD also breeds an interesting health system — Afro’s garb gets bloodier as he takes more damage.

Battle doesn’t take a genius. After a few large confrontations, you’ll have a series of moves that you’ll use and master over the course of the game. Additional combinations can be unlocked through a general leveling system that seems tacked on. Crazier moves can be unlocked by finding Relics throughout levels, but these things are hidden and often well out of the range of play. I never wanted to find all of the relics to unlock these powers because of the break in action. 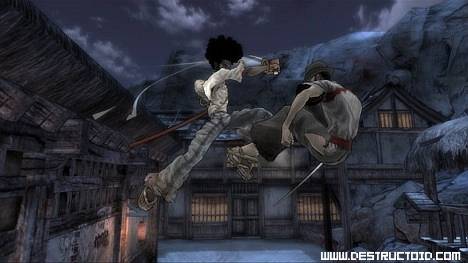 Perhaps the most disappointing aspects are the ones most integral to the battle experience. The camera is fidgety and needs to be babysat as you hack through the endless hordes of enemies or scale walls. It is also inverted like a flight simulator, which drives me nuts. The AI of the enemies that you focus the camera on is particularly dumb. Villains attack erratically slowly and provide zero challenge. The only real challenge to be met is within plodding boss confrontations, and that’s only because the game forces you to utilize special abilities like the Parry or Bullet Reflection.

In addition to combat, the game also features platforming akin to Ubisoft’s Prince of Persia reimagining. Afro can scale, run and jump on walls. The majority of level navigation is done by these means. Clipping issues and bad mechanics will keep you from hitting ledges with ease. Clunky physics make easier jumps difficult and poor contextual clues as to where you’re supposed to apply Afro’s gymnastic ability prevent easy navigation. There is an ability called the Ninja Compass that summons your little buddy Ninja Ninja and a cloud of smoke to a nearby platform you’re to climb. The problem is that when you need it the most, the option isn’t available for whatever reason. Instead, Ninja Ninja will greet you with the epic line, “Bitch, I ain’t your GPS.” 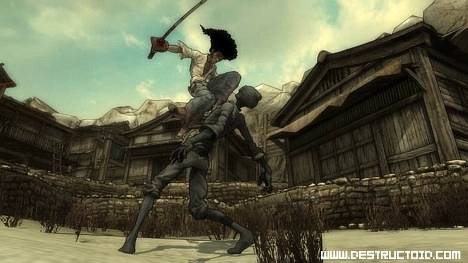 Aside from Ninja Ninja’s tacky lines, there were too many things in Afro Samurai that frustrated me. Mundane boss confrontations don’t allow you to exhibit your fighting prowess. Awkward platforming segments slow the flow of the game to a crawl. Weird clipping issues and dangerous framerate drops deter the action of the rather short (five to eight hours) span of play. I wish there was more to Afro Samurai, but there isn’t much to sink your teeth into. The game feels 75% complete. The only shine that the game does have is within its visual flair and soundtrack — two components that are nice to have, but should be the lesser concern of tight and well-rounded gameplay. It’s best to give this game a rent if you’re yearning for some blood.