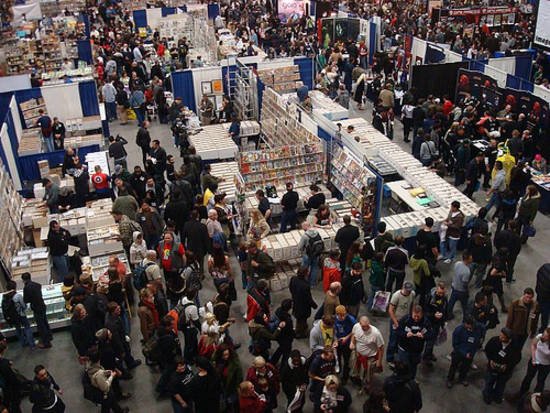 At the end of the hectic GDC week and right before the epic San Francisco NARP was Wondercon 2008. I, along with Dyson, Virtualgirl, .tiff, Reverend Anthony, Charlie Suh, Ceark, Dexter345, and Chad Concelmo, all ventured through the sea of nerds and cosplayers. There were tons of comics all around and plenty of delicious looking action figures and toys that we all drooled over.

This experience was a nice change compared to my previous con adventure. The atmosphere was very welcoming and there were a lot of fantastic cosplaying all around. I even broke down and actually bought something for once. Marvel Zombies, by the way, is horribly awesome. That makes perfect sense if you’ve read the series.

There was also a nice gaming presence thanks to Ubisoft, Capcom and The Behemoth. Ubisoft was showing off Rainbow Six: Vegas 2 while Capcom had a few games on display including Okami for the Wii. The game of choice for most of us there was of course Castle Crashers.

They also had a few celebrities signing autographs and doing panels at the event. Timmy from Lassie, Chewbacca from Star Wars, and several others. The original Louis Lane was signing autographs as well. I forget her name, but it broke my heart to see her sitting and waiting for people to come up to her for an autograph. Like seriously, it was the saddest thing I saw all week.

Check the gallery for what the show floor looked like and all of the awesome cosplayers. Special thanks to Virtualgirl, .tiff and Charlie Suh for the picture takings!