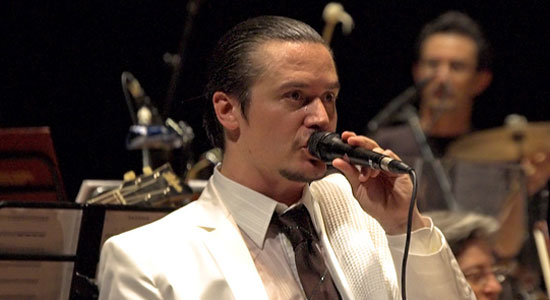 Singer/songwriter Mike Patton’s been on the music scene for awhile, and to say the man has made a name for himself is an understatement. Since first “breaking onto the scene” with Faith No More in the early 90s, Patton has consistently challenged and reinvented himself as a musician, with projects ranging from noise collaborations with avante-garde composer, John Zorn, to the “ghetto-tech” stylings of Peeping Tom.

To some, he’s reached an almost God-like status, with fans rabid enough to not only follow his work across a countless number of projects, but to discuss things like what hair gel the man uses. To others, he’s simply admired for his versatile and chameleon-like ability to manipulate his voice across a wide variety of vocal styles. No doubt, the guy’s got chops.

The developer of The Darkness, Starbreeze Studios, seem to agree. For their upcoming title (set to hit shelves this month), the developer tapped Mike Patton to channel the voice of Mafia hitman Jackie Estacado’s inner demon, the Darkness. Destructoid had a chance to catch up with Patton to talk about his involvement with the project, his could-have-been involvement with Rockstar’s Bully, zombie sounds, and Britney Spear’s secret ability.

How did you get involved with doing voice over work for The Darkness?

Starbreeze called and asked if I’d be interested. Simple as that.
So, you’ve done some acting, but your main gig is clearly as a musician. In some respects, I’d imagine you’d be at home in a recording booth. What was it like doing the voice over work for The Darkness?

A lot harder. You have to use imagination and try to think about the character. It’s very different than making music. When I make music I’m myself. Also, you have to do things over and over doing voice work. I’m also used to directing myself instead of being directed. It was an interesting process, for sure, but a lot of hard work, believe it or not.
Were you given much direction or were they basically like “You’re Mike Patton, go to town?”

Oh no! There was a lot of direction. I had no idea who the character was, and knew very little about what the game was at first. As the day went on I found my niche. It was not about being Mike Patton, it was about being … the Darkness!
I’ve spent some time with the game and it’s completely brutal, just the way I like it. Have you had a chance to play it yet?

Wow! Really? No, I have not seen hardly anything. I have not even seen footage with my voice in. Good to hear. It seems to be building a buzz and getting some early press. I hope it turns out cool. The people that made it are very talented, so it should.

Awhile back, word was that you were providing music for the Rockstar game, Bully. That obviously didn’t pan out. What happened there? What direction were you taking the music?

I don’t think I’m supposed to comment on that. I’ll say this — I was very disappointed. I was really looking forward to doing that. I love the games they put out. I would not rule out working with them in the future. They are one of the best.
Any plans on dabbling in the industry anymore? I’m sure you wouldn’t have an issue getting the gig. And if you were to score a game, what type of game would you like it to be?

I hope to continue to pursue this line of work. I’m an avid gamer so it makes sense. I know what works and what does not while gaming. I think there is room for the gaming industry to expand musically for sure.
I play mostly sports games, but am definitely drawn to the Grand Theft Auto games as well. I’d love to score the next GTA or Manhunt. I’m doing some zombie sounds for an upcoming Valve game [Left 4 Dead]. It’s fun stuff!
Zombies are good. So I hear you’re a gamer yourself. Between your fifteen projects and the current tour, what are you playing?

Right now I’m playing mostly sports games: NBA 2K7 and MLB: The Show. Of course, I’m doing a lot on the PSP. I finally got a PlayStation 3.

Since you’re a seasoned musician and performer, I’m going to throw out some names of music-based games just to get your reaction. Guitar Hero?

Tried it a bit, but I’m not real good. My fingers can’t move that quick.

PaRappa the Rapper?
Ahhhh yes, kind of where the genre started. It was fun in the day. [Editor’s note: Patton’s not a videogame historian, so let’s not correct him. OK, nerds?]

Dance Dance Revolution?
Played it in an arcade, not really my thing. But it gets people off the couch, right?

Britney’s Dance Beat?
Anything she touches is gold! Like KFed.

Elite Beat Agents?
Have not tried.

Huh? Sounds horrible!!!
You have no idea. So what’s next on your table as far as your career is concerned? Any particular projects you plan on focusing on next?

Putting out a new Tomahawk record on June 19th called Anonymous where we interpret Native American hymns and chants. Doing some zombie sounds, working on the next Peeping Tom. Same old. Keeping too busy.

Thankfully I got my PSP for the road and PS3 at home. The Wii looks really fun too. Gaming helps clear my mind. Can’t wait for the next GTA and Manhunt. And The Darkness, of course!